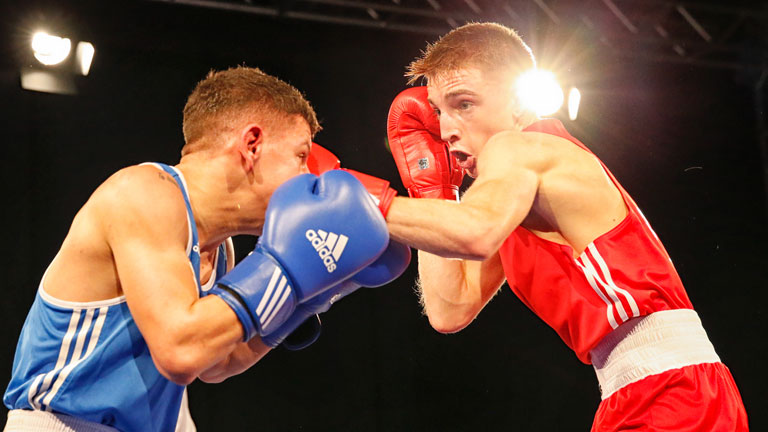 FORMER amateur standout Jack Bateson makes his professional debut tonight (September 1) as he prepares to kick off his paid career in style – on one of his dad’s promotions.

His father, Mark Bateson, has been promoting shows in Leeds for years and when Jack decided that he was going to turn over, the 23-year-old made sure he was on this card in the Leeds United FC Banqueting Suite at Elland Road.

“I’m really happy with how preparations have gone. It’s great to be back home training with my dad and my uncle [Martin] and the rest of my team,” the flyweight told Boxing News.

“I’ve sold a load of tickets for this fight, with it being in Leeds, and I just can’t wait to get in there now. I’m really excited to start the journey.

“My dad’s promoting the show, he’s been promoting shows for about 18 years so I’ve grown up watching his shows and I’ve always dreamt of fighting on one of them, so for me it was only right to start the journey there. I can fulfil a dream before I, hopefully, go on and fulfil more.”

An European bronze medallist, Bateson was in contention to box at Rio 2016. However, Muhammad Ali pulled out of their box-off in a GB championship final, and Ali was then sent to a qualifying tournament over Bateson and booked his place at the Games.

Last bit of sharpening done with my uncle and Coach Martin tonight before Fight Night this… https://t.co/zC6sxVIbXi

Bateson is, naturally, still aggrieved about the missed opportunity but he insists it will not hinder his career as a professional.

“Looking back, I’m proud of what I achieved but I feel I was held back a bit from achieving more. I didn’t go to the Olympic Games,” he said.

“It was a bitter pill to swallow. My career might have been different now, but I’m happy with what I achieved as an amateur, I had five years on the GB squad, I won European bronze, two ABA titles. That’s all history now, I’ve got to make a new name for myself.

“I’ve got a lot to prove. Even though I had over 100 amateur fights, I’ve got to prove myself again from scratch and really make a name of myself. I’m looking forward to starting fresh, I’ve got my old team behind me who got me to where I was as an amateur in the first place. I’m looking forward to starting this new journey and taking a good crack at it.”

Bateson enters the paid ranks at an encouraging time for boxing in Leeds, with featherweight Josh Warrington drawing huge crowds as he pursues a world title shot and double Olympic champion Nicola Adams blazing a trail for women’s boxing.

He is already beginning to experience that passionate home support, and hopes to be a part of a new wave of talent fighting out of Leeds.

“That’s what spurs us Leeds fans on. Fans in Leeds really get behind someone and us boxers,” he continued.

“In boxing, people can be a bit selfish and support their own but in Leeds they get behind everyone, they all get behind Josh, they all get behind Nicola, now that success is starting to come for me and there’s a good bunch coming through and hopefully over the next few years you’ll see a lot of great fighters come out of the area.

He insists he is no rush at the moment, and is happy to get some professional rounds under his belt as he moves toward title level in the coming years.

He said: “In my mind, in a few years, I want to be pushing for titles but I’m not in a complete rush. I’ve had three WSB [World Series of Boxing] fights, which should stand me in good stead, but for now I’m learning the game. I’m going to fight often, maybe six to eight times a year, hopefully get a good team behind me and push on. I know I’ve got a long way to go, it’s exciting times.”