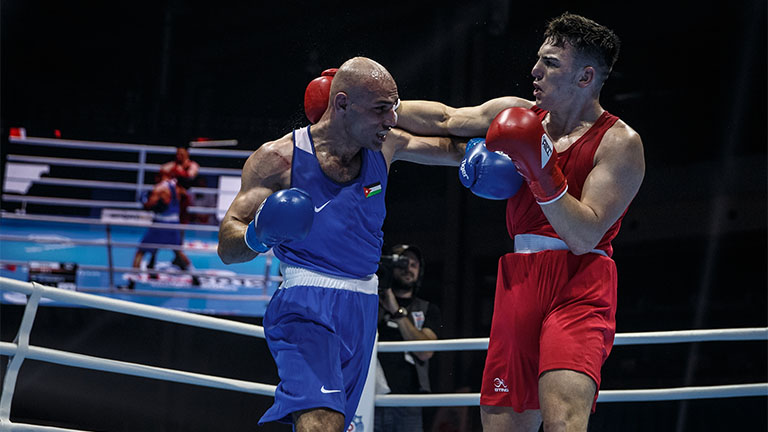 Wales national coach Colin Jones, formerly a British, Commonwealth and European welterweight champion, in his own words tells Louis Daniel of his roles and responsibilities

“I’m still very proud of what I achieved myself as an amateur boxer under Gareth Bevan at the Penyrheol ABC. I won my first Welsh title at 11 years old then won every year bar one before turning pro at 18. I also won three British schoolboys. In the seniors I added two British ABA titles and went to the 1976 Montreal Olympic Games. I had well over a hundred bouts. We need to get kids back to serving that type of apprenticeship.

In 2006, Tony Williams asked me to join the national set-up. I agreed to give it a trial for a year, see how we went, and I’ve been there since. I’ve helped bring through the likes of Fred Evans, Andrew Selby, Joe Cordina, Lauren Price, Rosie Eccles….

I’ve been head coach since 2011. I’m responsible for the whole kibosh but mainly focus on the top Youth and Seniors, anyone eligible for the next Commonwealth Games. It’s a four-year programme. We’ll only take them if we think they can medal. I enjoy the travelling and I love the opportunity to study all the fighters at the big tournaments.

I’m based at the National Sports Centre in Cardiff, a lovely facility. As a coach, you have to be good at a lot of things. To help, we’ve got analysts here, someone doing the strength and conditioning, dieticians, who work for the Institute of Sport not just the boxing. It gives me more time to coach the boxers. I’m also very reliant on the club coaches at grassroots level. There’s so much knowledge in those older fellas.

I still remember and utilise methods from the good old days but any coach who can’t tweak and alter, will get left behind. The Elite squad are here Monday to Thursday. It’s a good time to be an amateur boxer. They get all their food, accommodation, petrol paid for, which gives them every chance. Too many kids with great potential are turning pro as teenagers and I see them two years later and they’ve had just three, four fights. Ruined. What a waste of talent. I’ll be the first to tell them to turn pro and fill their pockets, when they’re ready.

I have a very good relationship with Rob McCracken, a very clever man, at the GB set-up in Sheffield so, if we’ve an especially talented boxer, I’m more than happy to send them to him, knowing they’ll be in capable hands.
Presently, we’ve got Mickey McDonagh at 63kgs and Sammy Lee at 81kgs plus (World champion) Lauren Price at 75kgs and Rosie Eccles at 69kgs. All are in with a good shout of going to the Tokyo Olympics next year. The Olympics are the pinnacle for any amateur. It’s some achievement just to qualify.

You have to have the boxer’s best interests at heart. My biggest gripe today is the restrictions on wrapping boxer’s hands. The amateur authorities are stuck in time. We need pro wraps for all senior boxers. It’s not so they can hurt people, it’s to prevent boxers busting their hands at a young age. I’m seeing terrible injuries at 18, 19, 20. Presently a pro wrap is only allowed at the Worlds, Europeans and Olympics which is ludicrous. By the time youngsters reach elite competition, it’s too late.

Our top Welsh boys and girls get decent funding but it’s still the smallest funding of the home nations because we’re the smallest nation. We have to succeed at big tournaments just to sustain it.

As Welsh coach, I’ve been to six Commonwealth Games – three Senior, three Youth – and we’ve delivered 25 medals. We’ve won more medals since I’ve been there than they’ve probably ever done. We had five medallists in Glasgow (2014), four in Australia (2018). We must be doing something right. A good group bring each other along on their journey. I try to instil values such as loyalty, honesty, respect, being a good sport.

I never ask them to do anything I haven’t done or wouldn’t be prepared to do – but I’m not a fighter’s friend. You’ve got to be hard and honest. Sometimes, there are difficult decisions.

Sometimes I do need to be stern with them, though I don’t like taking the ‘scallywag’ out of a fighter … just manage it.

I don’t get excited about much in life but I do love achievement. I love winners. I still have that competitive gene, that edge. Without passion, you can’t do the job of national coach. I’m Wales through and through. Patriotism goes a long way and in Wales we have that in abundance.”

WARRINGTON outfit Phoenix Fire outfit staged an open show at the town’s Eagle Sports and Social Club on October 17 – and, remarkably, all 18 bouts (one skills) went off as scheduled.

There was no soft matching: of the 16 home boxers involved, only five won. And only one stoppage all night shows how competitive the action was.

It was a contrast in physiques: Naseeb tall and slim, Dodd shorter and powerfully built. But while Naseeb edged the first, after that Dodd’s intelligent aggression paid full dividends as he got inside, worked the body and harried the local all over the ring.

Naseeb received a standing eight count and a warning for holding in each of the last two rounds – but showed guts to reach the final bell, where Dodd was a worthy unanimous winner.

This bout was made at 72kgs but Brown is slimming back down to welter (69kgs), at which weight he was Merseyside champion two seasons ago.

Also impressing for the hosts were Kory Smith, a southpaw Schoolboy who displayed nice movement in defeating Corben Beecher (Tommy Coyles), and “Ginger Ninja” Niall Gallagher, who worked non-stop to outpoint George Birkett in an all-southpaw Youth contest. Birkett was one of a five-strong Rotunda contingent who returned to Liverpool with four victories, most notably from Louis Dwyer, a stylish 60kgs junior southpaw. Louis is the grandson of Pat Dwyer, the 1965 ABA light-middle 71 kgs champ who became a top pro.

WEST Ham Boys Club staged a Sunday afternoon junior open show at the Dagenham Roundhouse on October 13, with the number of split decisions testament to the solid matchmaking – as was the fact several Hammers lost.
A junior three-twos 57kgs clash of champions born in 2003 pitted West Ham’s tall and rangy southpaw Finley James against Odel Kamara (Salisbury). Styles just didn’t gel with too many tangles – they both fell over together in the last – but Kamara’s controlled aggression and punches in bunches told as he won unanimously.
Kamara was one of three who travelled all the way from Liverpool, with Salisbury head coach Paul Edwards happy to get experience for his burgeoning team.
The other two “Solly” boxers lost narrowly to host club entries, Harry Hall by 3-2 split to Ted Penfold in a 3 x 1 1/2mins schoolboy bout at 33 kgs and Matty Hogan via 4-1 split to Teddy Carroll in a junior 3 x 2s at 65 kgs.
West Ham’s junior schoolgirl champion Anastacia Butler came up against a quality opponent in Berinsfield’s Katie Lane, with both enjoying success in this 3 x 2s made at 62 kgs before Lane won a 4-1 decision.

ROB ROY SHOW
The Scottish club to get their season started

IN Scotland Rob Roy Boxing Club, which is based in Glasgow, will hold their first show of the season on Friday (October 25) at the Crowne Plaza Hotel, Glasgow.

It will be a Rob Roy Select v England Select, with Peter Roberts bringing up some of the top North West English boxers for what promises to be a great night of boxing.