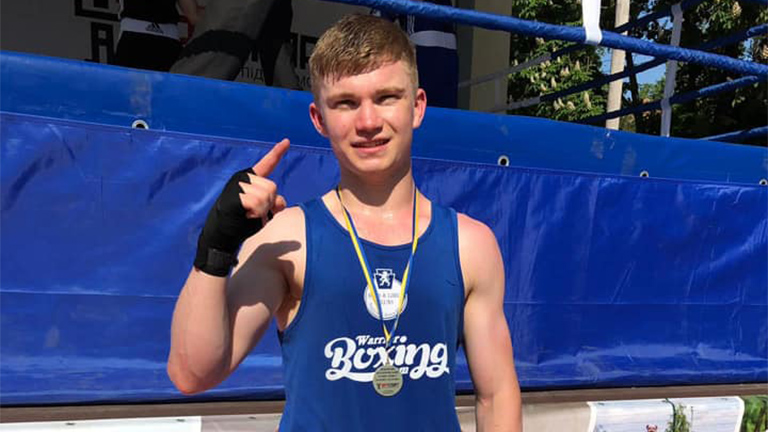 'I thought about going pro but I wanted to stay in the amateurs, go in Box Cups around the world and enjoy my boxing.' Macauley Owen is ready to take on the best in the country

BULKINGTON southpaw Macauley Owen grabbed a desperately close points win over Luke Bibby (Perth Railway) at Newdigate Colliery and District Sports and Social Club. For Owen, it was his first bout since he scalped Elite and Tri Nations champion Masood Abdullah (Islington) on his way to being named Boxer of the Tournament at last summer’s Haringey Box Cup. The 22-year-old had his hands full with Bibby, a Scottish champion at Novice and Intermediate level, writes Matt Bozeat.

The first round was clearly Owen’s. He was able to make Bibby fall short and clip him with clean counters that brought applause from an appreciative crowd. Bibby didn’t land a punch of note until the final minute of the round when Owen shipped a right hook that made him grab.

The 19-year-old Scot had more success in the second when he was able to get his head on Owen’s chest. Owen did get through with body shots in the closing moments, but still it looked to be Bibby’s round.

The third started with an exchange in the centre of the ring. The cleaner, harder punches came from Bibby but then Owen came back into it chipping away with twos and threes. By the last minute, Bibby had reloaded and was ready to let his hands go again.

After the split decision was announced, Bibby sat with his head in his hands and there were those at ringside who had sympathy for him.

Next for Owen, an NABC champion in 2018 and twice Haringey Box Cup gold medallist who has had 66 bouts, is the British Universities and Colleges Championship that gets underway this month. Owen is currently studying for a Masters in Sports Science at Coventry University and after missing out last year because of his studies, he plans to enter the Elites.

“I’ve been around the pros for a couple of years,” said Owen, “and I thought about turning professional.

“But there’s all the stress of selling tickets so I thought I would stay in the amateurs, go in Box Cups around the world and enjoy my boxing. I will see how far I can go in the amateurs and if Great Britain want to have a look at me, I won’t say no.

“I’m confident in my ability now. There’s no reason why I can’t compete with the best in the country.”

Welterweights Jack Corcoran (South Normanton) and Zak Fummey (Perth Railway) met, Corcoran winning unanimously and deservedly so – but what a fight. After an even opener when Fummey jabbed and moved and Corcoran pressed, Corcoran, the 21 year-old son of ex-pro John, got on top. The referee might have given Fummey a count in the second after Corcoran knocked him into the ropes with a looping right and then crashed a clean left hook off his jaw.

Fummey showed his discomfort later in the round when Corcoran targeted his body.

The third was more competitive and though the crowd got behind Fummey when he rallied, he couldn’t match the compact Corcoran’s workrate and punch variety.

The award for Best Newdigate Boxer went to 13 year old Michael Pearson-Spencer, a second-round winner over Leyton Hyde (Willehall Town) in one of the bouts of the night.

At the bell Hyde really put it on Pearson-Spencer, launching hook after hook at him. Pearson-Spencer kept his boxing together, banged in some solid body punches and bloodied Hyde’s nose.

Alex Allardyce, the former head coach of Belgrave ABC, died just before Christmas after a spell of ill health, writes Matt Bozeat. The father of seven was 67 years old.

Allardyce was at the Leicester club during a successful spell. Sheldon Purdy, now a professional, won ABA Novice honours with Allardyce in his corner, but he will probably be best remembered for his success with Tommy Ward. In 2005-2006, Ward was an unstoppable heavyweight, storming into the Junior ABA Championship and adding the Three Nations gold by flattening the Welsh champion in just 10 seconds. He afterwards gave Allardyce his gold medal.

Elder brother David Ward thrashed Elliott Clayton, a super-heavyweight semi-finalist in the ABAs, on a memorable night at the club’s Checketts Road headquarters with Allardyce in his corner.

Others who shone under him included slippery southpaw Inolee Kiyimba, Simon Henry and his son Lewis, who showed heavy hands during his brief amateur career.

AFTER more than two decades of turning out champions and colourful fighters, Melton Amateur Boxing Club has shut. Head coach Trevor Booth says the decision to close the Leicestershire club was made after the landlord of their Rosebery Avenue gym decided to sell it for redevelopment, writes Matt Bozeat.

“There’s nothing we can do about it,” said founder member Booth, approaching his 71st birthday and a coach for around 40 years. “We could have tried to carry on somewhere else, but me and [assistant] Royce [Dawson] are both in our seventies and nobody seemed keen to take it on.”

Between them they produced a national champion and four professionals.  “We did OK for a small town,” said Booth. “We turned out some good lads, some tough lads.”

Paul Butlin is the best known fighter to emerge from Melton ABC. He had a couple of devastating knockouts in his 12 amateur bouts and as a professional, Butlin won Midlands honours and fought Anthony Joshua, Dereck Chisora (twice) and more. Butlin also steered Josh Quailey to the gym after working alongside him on the doors. Quailey reached the Elite super-heavyweight final in 2017 and is currently a 2-2 professional. Two other fighters from Melton turned professional. Carl Griffiths was a game lightweight who retired after winning two of seven and David Kealy had a couple, winning one and drawing one after turning over at 30. Booth regards Kealy as one of the best talents he trained and says that had he not taken a break from boxing after joining the Army, he could have won the British title.

“Kealy would look at a bloke and figure him out straight away,” said Booth, “and you couldn’t hit him.”

Kealy always put his elusiveness down to the size of the ring at the club. “We measured it at 11 feet,” said Booth and boxers who learned the sport in there tended to be either slippery or tough.

Nick Ross was one of the tough guys. Booth called him “a piece of rock” and his bout with Matt Johnson (Heart of England) in February, 2002 was described by the excitable local reporter – me – as “a bout never to be forgotten by those who saw it.” After six knockdowns, Ross got the verdict and Johnson never boxed again.

A couple of months earlier the exciting middleweight had created a stir in the Novice Championships when he scored three stoppages before being edged out in the London final. Now Shadrack Williams can testify that Fazil’s power is still there. For two rounds the taller Stonebridge boxer resisted well, but when fatigue slowed his movement in the last he walked onto a crunching Fazil left hook that sent him crashing down, with the bout waved off at once. Williams recovered quickly and won best Away Boxer, while Fazil won the Best Home Senior prize.

Best Home Junior/Youth on the December 14 show went to Hamza Hajee for his unanimous win over Earlsfield’s Marley Watts. The Moor Lane camp was unhappy when Ellis Adcock lost unanimously to Uzair Maqbool at Youth 52kgs. But while Adcock gave as good as he got initially, he faded in the last. The novice flyweight three-twos between Fisher’s Hassan Hashim against Saif Akmal did produce something bizarre. Hashim, a semi-finalist in the Novices and Boys Clubs, struggled to land cleanly until the last – by when he’d received two standing counts as Akmal boxed smartly. Hashim though was a surprise split winner.