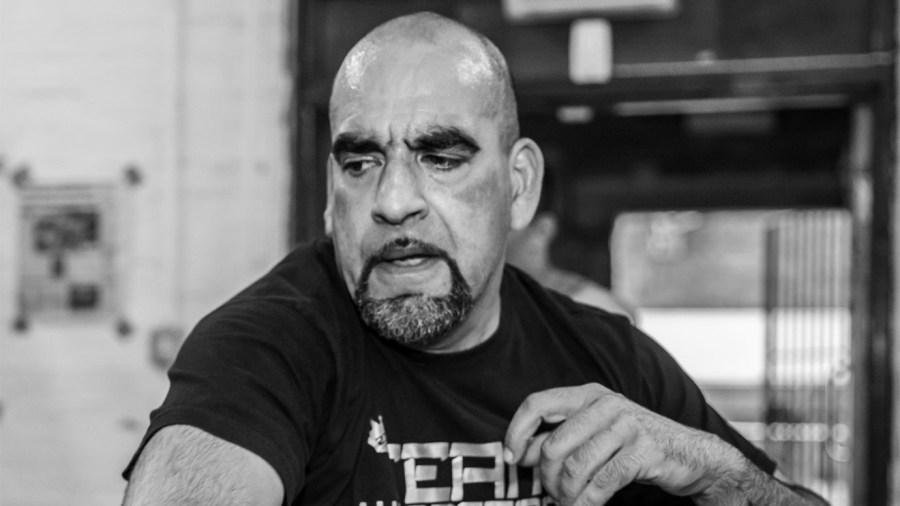 LEICESTER Unity ABC coach Ajmal ‘Hudge’ Butt has been made an honorary citizen of his home city.

Butt set up the gym on the troubled Beaumont Leys estate in the East Midlands city in 2010 and his success stories include Paige Murney, silver medallist at the last Commonwealth Games.

“The Police Commissioner said he could find me a bigger gym, but more kids means more problems and I’m already flat out,” he said. “I could have 30 amateurs if I wanted and I get asked to work with schools as well, but at the moment, my focus is on getting my fighters as far as I possibly can.

“I promised my mum I wouldn’t stop until I have produced a world champion.”

Leicester’s only previous world champion, Chris Pyatt, is part of a coaching team that works with professionals Lyon Woodstock and CJ Challenger, while amateurs Vinny Huczmann and Brad Bethel both made their mark this year, winning European Junior bronze and reaching the Elite semi-finals respectively.

Butt isn’t just proud of what his boxers achieve. “We’ve had 18 kids from here go to university and college,” he said and that’s a hugely impressive statement for an estate where lives are often lived out beneath the throb of police helicopter blades overhead.

Woodstock was one of the first through the doors of the Unity gym, which Butt opened in response to his brother Adil being stabbed to death.

Butt was the right man for the job. For years, he had patrolled the estate as an official peacemaker. If there was trouble and nobody wanted to ring the police, they called for ‘Hudge.’

“Not a lot of good happens around here,” said Butt, who fought on unlicensed boxing shows.

“I knew there were talented, smart kids around here, but they were just wandering around the streets at night, the same way I used to.

“The kids around here needed something to get them off the streets.

“I think they get me, we understand each other. The bond between us is strong.”

Butt decided the best place for the gym was above a dentists. “It’s handy for when I knock out people’s teeth,” laughed Woodstock.

Butt knew the premises from his youth. “That’s where the youth club was,” he said. “I’ve been going there since I was six or seven years old.”

The gym’s methods were tough. “

“There was no ring at the start,” said Woodstock, “so ‘Hudge’ would put us all in circle and then pick two of us out to spar. It was like the movie Fight Club.

“I remember thinking: ‘Whatever this is, I love it. This is what I want to do.’”

Butt explained: “I believe that before you learn to box, you have to be able to fight. You need minerals to fight and I’ve challenged my boxers right from the beginning. That’s how we grew up.” Butt’s chuck-them-in-at-the-deep-end methods worked. From the start, Leicester Unity turned out champions. Unity became ABA affiliated in 2012 and in only their second season, Murney and Clayton Orchard won national honours. Woodstock was an Elite semi-finalist and current rising stars include Isaac Huczmann and Cam Mahi. Both are unbeaten and Butt estimates that in seven years of competing, his amateur boxers have won 70 per cent of their contests.

The club’s reputation has spread way beyond these shores.

“I got a message from a girl in Singapore saying: ‘I want to come and train with you in Leicester,’” said Butt. “A few weeks later I got a text from her saying: ‘I’m here, when do we start training?’”

19-year-old Nur Sabrina is a member of the Singapore amateur boxing squad and Butt said, “I asked her how she came to know about us. It turned out, her dad is a businessman and his best mate is from Leicester. He knew about us and Nur asked for sponsors to pay for her to come here.”

She raised the funds and with Butt in her corner, Sabrina won the Esker Female Box Cup in Dublin last October.

“She went home after that,” said Butt, “and I got a message asking if I will coach the Singapore national team.

YOU could never say there is a shortage of clubs or boxers boasting a TS postcode. But Teesside has a new outfit in Billingham Boxing Club and for its founder it was just what the area needed.

“I’ve lived in Billingham for 12 years,” Worth said. “I’ve always been involved in boxing and known what a strong area it is for the sport.

“Middlesbrough and Hartlepool are both hotbeds of boxing – there are five clubs in Hartlepool and eight or nine in Boro.

“But there was no club in our town. Not everyone can travel on an evening to Hartlepool or Middlesbrough so I thought ‘why not put on a class?’ It went so well, we quickly outgrew two premises.

And how they competed in front of a passionate and sporting sell-out crowd on January 23 at Billingham Synthonia club which hosted 16 contests. TJ Tyers looks a young talent to keep an eye on. The 15-year-old, in only his fifth bout, conceded experience to Worksop Xbox’s Andy Coulson, but not skill as he took a unanimous decision.

His team-mate and fellow 15-year-old, Harley Carberry, also impressed with all three judges scoring him the winner against Manchester’s Matthew Rushton (Hope Street).

Two Billingham teenagers won on their debuts, Isaac Dolan and Ben Grounds, outpointing Xbox’s Kyle Finch and Seacroft’s Henry Armitage.
Elsewhere, there were wins for Middlesbrough duo Hashim Hussain and Harris Zaman, while Tyneside ABC were involved in two of the bouts of the night with Mobin Khalafzadeh and Bailey Stone defeating Brent Hogan (Ward Degnan) and Marcus Frazer (Boldon).

THE capital’s first championship show of 2020 produced 13 prelims at the Roundhouse in Dagenham on January 24, mixing the Youth and Youth Cadet age groups with London’s innovative event for elite Intermediate boxers.

Catching the eye was West Ham southpaw Finlay James, who moved well and countered sharply with his left hand for a unanimous decision over Harrow’s Alex Hatcher in a Youth Cadet 56kgs semi-final. Both ended bleeding from the nose.

The two heavier-weight youth bouts were both hard-fought distance jobs. At 91kgs Aloys Doumbi from Double Jab put a standing count on Micah Degrasse Christopher (Dwaynamics) in a strong last round to swing a 4-1 split decision.

ON Saturday afternoon (February 1) Birtley Boxing club are hosting a home show at the Wardley Club on Sunderland Road (NE10 8AU). Doors open at 12pm, first bout will be at 1pm. Tickets are £20, £10 for under 12s. The club promises “a fantastic afternoon of boxing. Some great fights on the bill. Some of the future stars of the club will be on display, get yourself a preview of what’s sure to be a cracking squad coming through the ranks.”