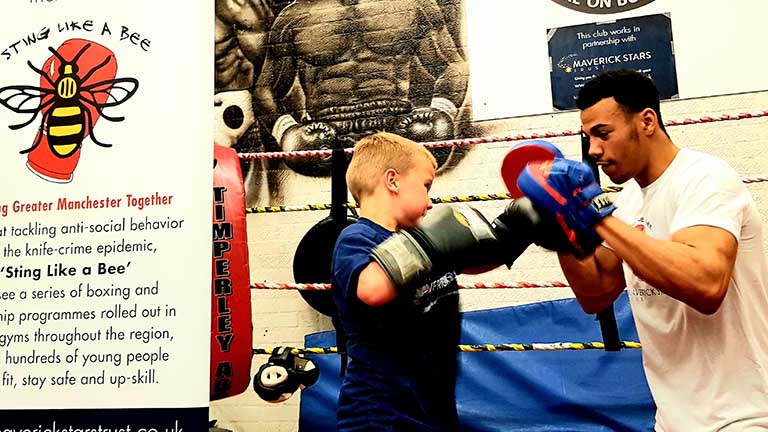 'Boxing is not what some people think it is.' With a charitable iniative getting under way in Manchester, John Dennen rounds up the amateur scene this week

‘BOXING IS THE OPPOSITE OF WHAT SOME THINK IT IS’

MAVERICK Stars, a charity founded in order to ‘change the lives of young people,’ has partnered with England Boxing to support numerous clubs and began the ‘Sting Like a Bee’ initiative.

This was started to address anti-social behaviour and help tackle knife crime, opening up a series of boxing and leadership programmes at different boxing clubs in Greater Manchester. Each of the region’s 10 boroughs now has at least one designated ‘Maverick’ gym. These clubs have received funding and will work with the police, councils, schools and other organisations to support young people at risk. The aim to engage with hundreds of people, aged from eight to 25 years old, with a view to helping them get fit, stay safe and up-skill.

“It’s very important to address knife crime as there is a bit of an epidemic going on with it at the minute across not just cities like Manchester, Liverpool and London, but all over the UK,” he said. “Boxing clubs being in the areas that they are and as the hub of many of their local communities can have a massive impact in speaking to the kids affected, helping them wise up and then giving them viable alternatives.

“It might seem like carrying a knife around is the cool thing to do because other people are doing it, but boxing clubs can spell out just how dangerous it is.”

Earlier this month Andy Burnham, the mayor of Greater Manchester, visited one of the other clubs involved, Timperley ABC. “It’s brilliant that boxing clubs around Greater Manchester are coming together as part of the Maverick Stars Trust and saying: ‘What can we do to help?’ I think that’s a fantastic offer for someone in my position to get. I’m certain they can help and reach some reach young people that other agencies will struggle to reach,” Burnham said. “The key is getting them through that door. It’s a big step to walk inside a boxing club for some young people, so through this initiative, if we can help them do that, then once they’re inside, they’re away. They can turn negative energy into something much more positive.

“Boxing is almost the opposite of what some people think it is. It has to be a disciplined environment. When people walk-in they see the reality of what it is, what it can do for them and the confidence it can give them. That’s a massive part of it.

As well as Timperley and Moss Side Fire other clubs taking part in the ‘Sting Like a Bee’ initiative include Bridgewater Salford, Halliwell Elite, Oldham, Paramount – Stockport, Hamer, Hyde and District, Collyhurst and Moston, Bury and Majestic Boxing Academy – Bolton. Along with providing boxing and other opportunities for young people in gyms across Greater Manchester, there are also plans for training camps at home and abroad and a ‘Greater Manchester Box Cup’ earmarked for Spring 2020.

Bainbridge was aiming to make it her third consecutive gold at Monkstown, and put behind her the disappointment from June’s European championships where she was marginally defeated in the quarter-finals by Russia’s eventual champion. At the Box Cup Megan emphatically stopped her semi-final opponent in the first round with a body shot. In the final Bainbridge met Irish international Janelin Rodden. They had boxed before and were 1-1, but in a tactical affair Bainbridge won unanimously to seal her victory and 3rd Monkstown gold.

Debuting at the tournament Murphy went straight into the final at 62kgs against an Hungarian opponent of over 20 bouts (it was Alfie’s fourth) and Alfie (all 6ft 3” of him) demonstrated skill and poise beyond his experience to out-work and out-land him to take a clear unanimous points decision.

Brandon coach Alex Oliver said, “The event is organised fantastically and JP Kinsella and Sinead O’Connor are fantastic hosts. I took my disabled daughter Kara-mai and for the second year in a row they gave her a Monkstown vest and VIP treatment. It is greatly appreciated.”

THE boxers, coaches, officials and volunteers of the Dagenham Police & Community Boxing Club ended the 2018/2019 season with their annual presentation awards night at The Roundhouse, Lodge Avenue, Dagenham.

In all, there were 41 ‘Special Awards’ presented, and each and every club member also received a plaque.

Some of the Special Awards have been presented for over 50 years, with big names from yesteryear engraved on them – previous award winners include Kevin Mitchell, Tony Conquest, Robin Dupre, Lawrence Okolie and Jose Lopes – who’ve all gone on to successful professional careers.

Billy is the perfect role model for Dagenham’s younger boxers, who are inspired by his dedication and attitude. Billy is currently waiting to find out if he’s been picked to represent England in the upcoming Youth European championships which take place in Sofia, Bulgaria in September.

Other winners included Harry Carter, who scooped four awards, having reached the national Schools quarter-finals finals in June. Carter collected ‘The Lenny Wilson Cup for Dedication,’ ‘Winner of most bouts,’ plus The Jim Butler Memorial Cup as ‘The Most Successful Schoolboy.’

Top official, receiving the Sapsford Trophy, was Dave Tipler for his sterling work at ringside at boxing shows up and down the country. The Sid Trent Members Cup – Most Valued Member went to coach Jim Lavey who has spent more than 55 years creating champions. Over 100 national and international champions have been produced by this man. All Dagenham’s coaches and officials are pure volunteers, a group of dedicated people with a passion for amateur boxing.