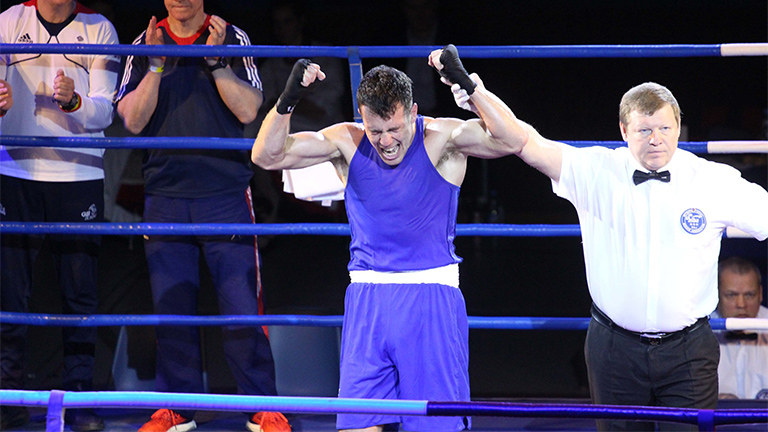 Despite missing out on the first shot at the Olympic dream, British boxers still performed at the Bocskai tournament

ENDURING the disappointment of missing out on selection for the first Olympic qualification event, a small squad of GB boxers were still in action at the Bocskai tournament in Debrecen, Hungary.

George Crotty won a good light-heavyweight gold medal. In the final on Friday (February 7) he beat Spain’s Gazimagomed Schamilovich on a unanimous points decision. The Briton had enjoyed a walkover in the semi-final but in the quarter-final he outscored Ukraine’s Valerii Kharlamov on a split decision. He won his two preliminary bouts, a unanimous verdict over Greece’s Polyneikis Kalamaras and split decision over Moldova’s Dmitri Cosciuc.

“Four fights and four wins in five days out here. The perfect week. Picked up my 100th win and gold at one of the most competitive competitions of the year,” Crotty stated. “Buzzing to be back on top of the podium. Great trip away with a great team and thanks to all of them.”

At welterweight Cyrus Pattinson won his opening two contests. He beat Botswana’s Mmusi Tswiige on a split decision and then unanimously outscored Norway’s Don Emini. But in the 69kgs quarter-final he came up against the eventual gold medallist, Wahid Hambli from France. The Frenchman edged hm out of the competition on a split decision.

“The final fight against the French kid, he had just won the Strandja and he won the Box Am as well before Christmas. I had sparred with him [before] so I knew it was going to be a hard fight,” Pattinson said. “It was one of them fights where I had to be more clever. I couldn’t box like I did against the Norwegian because he’s a counter-puncher. We knew that we had to counter his counters.

“It worked well, I used body shots and he told us after the fight the body shots were really hurting him. He ended up winning the competition, so it was just one of them. It was close. The first and second were close and the third was my best round. It’s just one of them… You’ve just got to focus on your performance, I thought I performed well. I boxed well and that’s all you can do.”

At 63 kgs Wales’ Mickey McDonagh was drawn against Russia’s Boris Shikunov for his first bout in Hungary. McDonagh lost a split decision to the Russian.

BATTLE OF THE BELTS

ON a big show at the Tottenham Community Centre on Saturday (February 8) in London an all-women’s event was followed by a series of Title Belt bouts. Stonebridge 75kgs Andrei Dascalu defended his Southern Area Title Belt with a stunning first round stoppage.

He came out against the Royal Navy’s Luke Chapman relaxed. But a crunching right cross dropped Chapman to the canvas. Dascalu’s right remained consistently hurtful. He piled in to catch Chapman a second time, giving him a standing count. Dascalu attacked again. Up close he cracked a massive left hook into the Navy boxer’s chin, flinging him to the deck and stopping the contest inside the first round.

Look out for Dascalu in this year’s Elite national championships.
Macormack Farrell did pick up a win for the Navy when he outpointed Bexhill’s Steven Garlick. Farrell landed crisp, clean punches, even if he wandered onto Garlick’s own right. The Bexhill heavyweight dug shots to the body but Farrell had done enough over the first two rounds to win a unanimous decision and the Southern Area Title Belt.

Earlsfield’s marauding light-heavyweight Omar Augustine overwhelmed Woking’s Dean Freeman over the course of three rounds. Augustine worked busily from the opening bell. Soon Freeman could not keep him off. The Londoner cleaved a left hook into Dean’s body and hammered at his head with hard shots. He drove Freeman into the ropes in the final round and took a clear points win, retaining his National 81kgs Title Belt.

Harvey Dykes looks to be a small super-heavyweight. But the Moulscombe southpaw scored a significant win over White Hart Lane’s Jeamie Tshikeva. He seemed to hurt Tshikeva in the first round. Dykes looked fitter and sharper, clipping Jeamie with his lead hook. Tshikeva tried to crowd him in the final round but Dykes had done enough to take a split points decision and rip the Southern Area Title Belt from the Londoner.

East London Boxing Academy’s Jack Daley defended his Southern Area 86kgs Title Belt with a strong showing against Southampton’s Luke McWhinnie. Daley lined up his right cross to catch his southpaw opponent through the middle. He dragged McWhinnie into a gruelling battle, connecting with the more hurtful shots. Although the decision was split, Daley was the deserved winner.

Haringey’s Amy Andrew is been preparing to enter the upcoming Olympic qualifiers and represent New Zealand. But she was back in club colours on this show and had a tough bout with Premier’s towering Michelle Cox. Andrew tentatively jabbed forward, wary of Cox’s greater reach. Cox fired hefty crosses down but Andrew managed to connect with eye-catching shots, landing her right hook over the top and taking a split decision win.
Finchley’s Patricia Mbata prevailed after a good bout with Haringey’s Dee Allen. They exchanged jabs initially but Mbata pushed forward onto the front foot to apply pressure. Allen threw accurate shots but Mbata’s work seemed to have the greater weight behind it. The Finchley boxer came out firing in the last round to make sure of victory. She landed straight punches to the chin and kept up her momentum to win a split points verdict.

Lambton Street’s Laura Wilson did not let Tysie Gallagher off the hook. She set about the Luton Town boxer relentlessly. She ultimately imposed three standing counts on her opponent before forcing a stoppage.

Amber Dennis was another victorious Lambton Street boxer on the show. Although Haringey’s Claudia Wilmot-Smith did pick out single shots, Dennis rattled off southpaw combinations and took a clear unanimous decision.

Afewee Youth boxer Vivien Parsons delivered a slick performance and unanimous decision win against Leigh’s Emily Monks. With good footwork, Parsons moved in and out of range, looping her right hook into the target. Monks drove forwards herself, firing straight shots. But with deft skill Parsons hit to the head and rolled clear from a follow up attack. Monks did tag her with a hard cross but Parsons forced a standing count in response, finishing the victor.

THE crucial stages of the England Boxing Youth championships will take place at Sports Connexion in Coventry (Leamington Road, CV8 3FL). The quarter-finals take place on Friday February 14 and the semi-finals are on Saturday February 15, with boxing starting at 1pm on both of those days. The finals will begin at noon on Sunday February 16. Tickets are priced at £20 for adults, £10 for over 65s and £5 for six to 15-year-olds. (Five years and under are free.)

Victory will put the boxers on the path to representing England. There are plenty of talents to look out form among them East London Boxing Academy super-heavyweight Hasnan Ali. Pinewood light-welter Adam Azim is another one to watch. Steel City’s Junaid Bostan is in the 69kgs division, while Hoddesdon middleweight John Hedges will be looking to make an impression.

“These are the final stages of this competition, but England Boxing would like to recognise and thank all those involved in the regional rounds in the run-up to this weekend. The priceless volunteers in our sport make all of this possible for our next generation of boxers,” England Boxing stated.