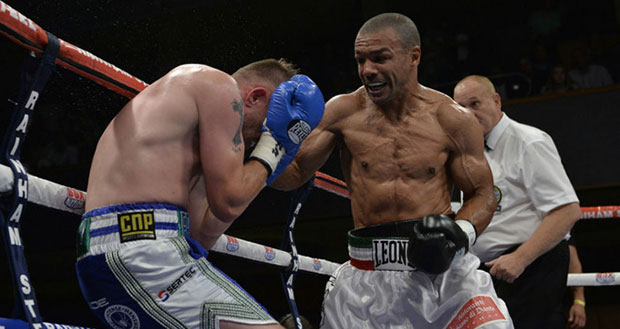 THE Wolverhampton Civic Hall was supposed to be graduation day for Frankie Gavin. The British and Commonwealth champion was taking on battle hardened 39-year-old Leonard Bundu of Italy for his European title. On paper it was a genuine 50-50 fight. Bundu was proven at this level making six defences of his belt that he won in 2011. Gavin, though, was an outstanding amateur and perhaps too slowly had moved to 19-0 since turning pro in 2009. In that time Gavin had captured his two titles and anytime he was pushed up a level he always came through well with wins against Junior Witter and Denton Vassell.

That level was pushed up a huge notch with Bundu but for five rounds Gavin was excellent as he controlled the distance with his southpaw jab, quick straight lefts and movement that wouldn’t let Bundu get set. Anytime Gavin’s back touched the ropes he cleverly spun away leaving Bundu chasing shadows. Gavin looked the real deal, while Bundu looked his age.

The fight then took a dramatic turn in the sixth as a huge right hook to the ribs dropped Gavin heavily. The fight looked over as Gavin rolled about in pain but somehow late in the count he jumped up. It was a brutal body shot and a reverse of what Mike Tyson did all those years ago with his bolo punches. Tyson would hit the body first to make his opponents hand drop so he could take aim at the head with a stunning hook of uppercut. Bundu did the opposite but it had devastating effect as he set Gavin up by aiming a short right hook to the head before quickly moving downstairs with that even harder body shot. No doubts it changed the fight.

Over the next four rounds Bundu took control of the bout as he chased Gavin around the ring but this time Gavin couldn’t spin out of the corner, Bundu had increased the pace but probably more importantly Gavin was still feeling the effects of that blow to the body. With two rounds left the fight was up for grabs, Bundu had turned it around, this writer had him up 95-94 after ten but somehow Gavin found that extra energy to sneak the 11th and then dominate the 12th. It was enough on my card to secure victory by 1 point. The fight was too close to call, maybe three rounds were swing rounds. It was down to the judges all who were from neutral countries as was experienced ref Daniel Van De Wiele of Belguim.

The scores took ages to be announced but when they came it was bad news for Frankie Gavin. The first one gave hope as Judge Robert Verwijs of Holland had it 115-112 for Gavin but he was overruled by German and Spanish Judges Arnold Golger and Manuel Oliver Palomo who both scored it 114-113 for Bundu. Gavin then bolted from the ring disgusted at the verdict but later tweeted it was the wrong thing to do. Bundu will now be looking for a world title fight and hinted he would be vacating the European title and his newly won Commonwealth belt, something he didn’t know he was fighting for until it was placed in his hands after the fight.

Below is the 29 boxing writers scores for this fight along with my full scorecard. A press average score has also been added.