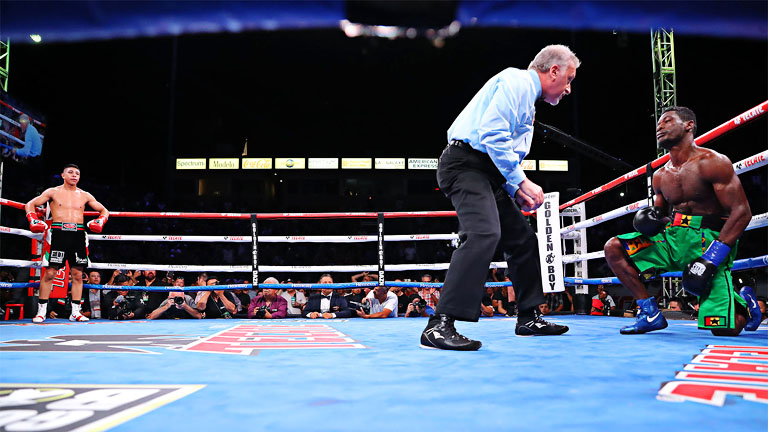 Patrick Allotey no test for Jaime Munguia on a shambolic show which saw Ryan Garcia's opponent apprehended by US marshals before their contest, writes Sean Nam

IT’S tempting to think that the annual fight card that takes place on the weekend of the Mexican Independence Day festivities was cursed this year the moment Mexican middleweight superstar Saul Alvarez turned his nose up at a third fight against embittered rival Gennady Golovkin. It’s as if a hole tore through the firmament, unleashing a wave of bad juju. How else to make of the events that led to the fights at the Dignity Health Sports Park? When Alvarez’s promoter, Golden Boy, sought to fill Alvarez’s absence with a double billing featuring 154-pound slugger Jaime Munguia and lightweight Insta-star Ryan Garcia, it seemed at least the cherished date could be preserved by featuring two of the most promising Mexican fighters in the sport today.

Instead, on the day of the weigh-in, Garcia’s opponent, Philadelphia’s Avery Sparrow was a no-show. It turned out Sparrow had been whisked away by U.S. marshals on an outstanding warrant stemming from a domestic violence issue (apparently, he had unleashed a gun on his significant other).

And that was too bad, as Sparrow, despite being a natural featherweight, would have offered a tricky test for the still-too-green Garcia.

From there, the theatrics reached a new level of absurdity and ugliness, as both Golden Boy and Garcia took to the social media airwaves to throw each other under the bus, with Golden Boy insinuating that Garcia was too scared to take on replacement Romero Duno (who was otherwise slated to appear on the undercard) and Garcia accusing his promoters of trying to cheat him financially.

Eventually, Garcia opted to sit out from the card entirely. The animosity between the two sides seems unlikely to be rectified anytime soon. Furthermore, it is compounded by reports that Alvarez, Garcia’s pugilistic big brother, is also extremely unhappy with Golden Boy head Oscar De La Hoya.

Unfortunately, the fights were not much better than the soap opera that preceded it. In the main event, Munguia, in his first outing with former world champion Erik Morales as his head trainer, dispatched undersized and woebegone Ghanaian Patrick Allotey in four rounds. Venturing outside his native homeland for the first time, Allotey, a career welterweight, was something of a deer in the headlights.

In the first two rounds, Allotey was able evade Munguia and catch him coming in with a few hard rights, but it was clear he was not comfortable dealing with Munguia’s hulkish frame and pressure offence.

By round three, Munguia was having success trapping Allotey along the ropes and settling into three-punch combinations. With a minute to go in the round, Munguia landed a walloping left to the body that forced Allotey to take a knee as referee Jack Reiss administered the count. Munguia would score another knockdown at the end of the bell.

In round four, Munguia landed another vicious body shot that forced Allotey to take another knee moments later. Thought he promptly got back up, his corner had no interest in allowing their charge to continue. Referee Reiss waved off the bout at 2-18 of the fourth.

Whether or not Munguia can fix the mistakes that nearly cost him against Irish contender Dennis Hogan in the last bout remains to be seen. But he may not have much time to correct them in his current weight class. Munguia has hinted that Allotey would be his last fight at 154, but he refused to give final confirmation postfight.

If Filipino Romero Duno was affected at all the by the Ryan Garcia kerfuffle, he did not show it, as he out-dogged Los Angeles’ Ivan Delgado with blistering power shots en route to a seventh-round corner stoppage on the Golden Boy Promotions undercard.

Delgado, who weighed in over four pounds of the lightweight limit, may not have been in optimal fighting shape (to say nothing of his professionalism), but he had his moments. Duno, however, was much too strong for Delgado, who elected to retire in his corner in between the seventh and eighth rounds. Edward Hernandez Sr. refereed.

The Verdict Better opposition, and a move up in weight, ought to reinvigorate the stagnating Munguia.