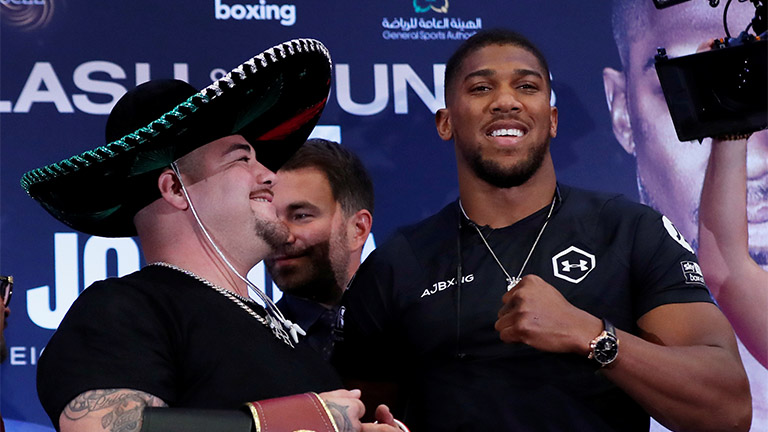 DEONTAY WILDER has confirmed that he will take on Cuban Luis Ortiz on November 23 in Las Vegas, two weeks before another heavyweight return sees Andy Ruiz Jnr and Anthony Joshua collide in Saudi Arabia.

Doubts had been building about both contests. Wilder was slow to formally announce the Ortiz return, and an escalation in the tension between Saudi Arabia and Iran led to concerns Ruiz-Joshua II would have to be moved to another site.

Wilder, who is Joshua’s long-term enemy, initially declared his intention to fight Ortiz again days before Ruiz defeated “AJ” in New York, nearly four months ago. It was quickly followed by news that a deal had also been reached for Wilder to rematch Tyson Fury next year. It meant that Andy Ruiz, the man who would soon win the WBA, IBF and WBO titles, barely got a mention at his own pre-fight press conference as the Joshua-Wilder-Ortiz-Fury merry go round stole the attention.

Wilder defeated Ortiz in March last year in a wildly exciting bout that concluded in the 10th round after the WBC champion emerged from several rocky moments to retain his title.

“In the rematch there’s more confidence and more motivation to do what I have to do,” Wilder said last week. “I’ve already seen the style before. It’s going to make it more fun. I can’t wait to see how he tries to handle me when I’m at my best.

“When I fought Ortiz, not only did he have the pedigree, but he also had the classification of being the boogeyman of the division. I agree with those who say Luis Ortiz was my toughest fight to date. No one wanted to fight him and they still don’t.”

Since beating Ortiz, Wilder was thought fortunate to get a draw with Fury last December before he thrashed Dominic Breazeale in a round five months ago. Ortiz, officially 40 years old, has defeated Razvan Cojanu, Travis Kauffman and Christian Hammer since he fought Wilder. The bout is set for the MGM Grand and will mark Ortiz’s first bout in Las Vegas since he knocked out Layteef Kayode inside two minutes and subsequently failed a drug test.

There is no confirmed word on the Fury return though the noises from the Englishman’s camp vary from Wilder’s. Fury is yet to fully understand the extent of the horror cut that blighted his recent victory over Otto Wallin and resulted in 47 stitches over his left eye. Though the British star has indicated the early signs are promising – while Wilder and co scoff at the likelihood of a quick recovery – the reported February 22 date seems optimistic.

There has been some speculation that Wilder, 33, will target the winner of Ruiz-Joshua II instead. Indeed, should Ruiz repeat his victory over Joshua then a unification showdown with Wilder would seem an easy one to make, particularly as both are connected to manager, Al Haymon. But the Ruiz-Joshua rematch has been shrouded in controversy since it was confirmed for Saudi.

Eddie Hearn, Joshua’s promoter, was quick to dispel concerns following drone attacks on oil processing facilities at Abqaig and Khurais which were the biggest ever strikes on the country’s oil industry. Hearn insists the attacks, which were 120 miles away from the site of Ruiz-Joshua II, will not persuade them to change their plans. At least not yet.

“We did contact our partners in Saudi and ask if everything’s okay and they said it was. As far as we’re concerned it’s all systems go. It’s a long way from Diriyah. It doesn’t affect the financial dynamics of the event, as long as everyone is safe and happy, the fighters and the broadcasters.

“Right now, unless someone came out of the government and said it’s not safe… The advice is not ‘don’t go there’ but the advice is to travel with caution. It’s the same category as the UK, France and Mexico so there’s no advice from any government to not travel to Saudi Arabia.”

There have been suggestions that the bout will instead end up in Cardiff or New York.

“We can change the venue if something major happens,” Hearn admitted. “But [Matchroom CEO] Frank Smith was on a visit at the stadium last week and with the international broadcasters, who all flew, and everyone was happy. “It’s always going to have its criticisms but the logistical meetings are 20 times more advanced than having the same meeting in London or New York. You think, ‘this is unbelievable’, everything is like clockwork, so you leave happy.”