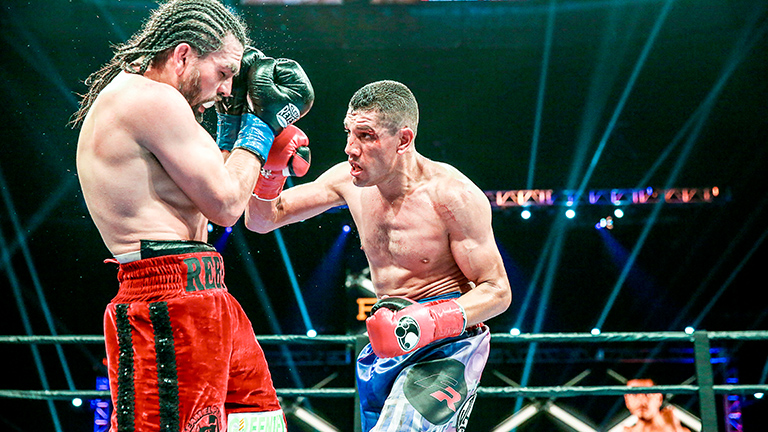 FREDDY Hernandez beat up a lead-footed Alfredo Angulo by unanimous decision on Saturday night’s Robert Guerrero – David Peralta undercard. The scores were 97-93 twice and 98-92 for Hernandez who has now won four in a row after losing his previous six. The Mexico City native improves to 34-8 with 22 KOs and plans to return to junior middleweight for his next fight.

By the third round, Hernandez seemed to be in complete control of the fight, keeping Angulo at an uncomfortable distance, and landing two and three punch combinations on the sluggish Mexicali native.

As the third round came to a close, Angulo was already displaying clear signs of exhaustion and Hernandez staggered and hurt the former interim WBO super welterweight champion with a hook near the ropes, the highlight of the night.

Angulo found some limited success in the middle rounds but his offense was sporadic and painfully ineffective. He landed a straight right that caused a cut over Hernandez’s left eye in the fifth and showed some signs off life after the connection, but Hernandez did a decent job of using the ring to avoid additional punishment from his opponent.

The fight was billed as the return of “El Perro,” but, in his moment to shine, Angulo sputtered. He was lethargic, missed nearly every counter that he threw, and was unable to ever get close enough to cause any real damage to Hernandez.

As far as the crowd was concerned, they seemed to mostly enjoy the fight, especially the action in the center of the ring, though it wasn’t necessarily the prettiest portrayal of the sweet science.

When the final bell rang, Angulo walked back to his corner looking defeated, both by his opponent and a long and painful career.

The Hernandez victory will likely set up another mid-level fight at junior middleweight for the 37-year-old veteran and also proved why it’s sometimes so difficult to walk away from a sport that can thrust you back into the limelight after just one more decent night in front of the cameras.

In Angulo’s case, the fight may have supported a bitter opposite, a need to possibly consider walking away from prizefigthing and hanging them up for good.