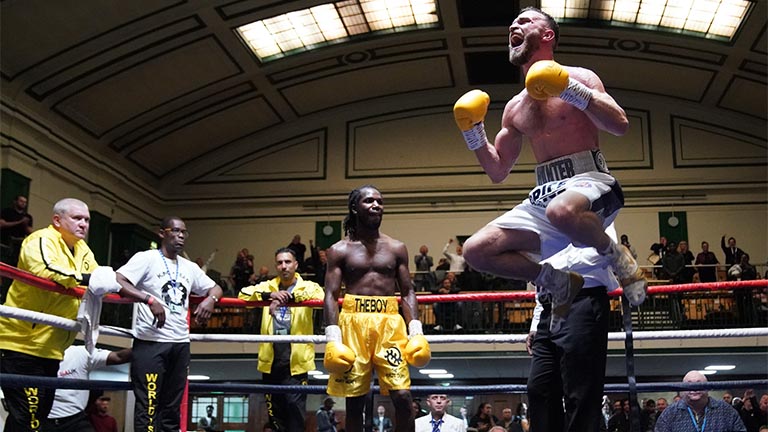 A MATCH-UP between unbeatens produced an unfortunate clash of styles, with the longer reach and southpaw stance of Alfie Price proving too much for Southern Area lightweight champion Jeff Ofori at York Hall.

At the end of 10 untidy rounds referee Jeff Hinds, who frequently had to pull the pair apart, scored for the challenger by a massive 100-92 (originally announced as 100-91) – and the scoreline told the story. Ofori (Tottenham) came forward but rarely got close enough to land, while Price made use of his reach and scored with long jabs.

It was Price’s first time beyond six rounds, but he showed no stamina problems. Ofori, making the initial defence of the title he won from Jumanne Camero, lost for the first time after nine straight wins.

Price (Hoddesdon) was marked high over the left eye in the third, and finished with a bump underneath it, but dominated round after round. In the fifth I noted “O stalking but not throwing” – and when he did get close, and landed a burst, Price held on. Another Ofori attack was met by counters on target.

The challenger held when Ofori got close in the ninth, and when Ofori tried to press in the last Price again countered effectively. Price was thrown down in the 10th but it was his fight – and his title.

Connor Marsden (Chelsea) made it three in a row when he floored and clearly outpointed Portsmouth’s David Birmingham over eight, referee Chas Coakley scoring 80-71.

Marsden dominated the first two with his height and reach advantages, and in the third a right to the side of the head put Birmingham down. He was up quickly, and held as Marsden tried to follow up – and later in the round Birmingham was thrown down. From then on Birmingham looked to survive, trying to make Marsden miss and holding when he got close.

Enfield’s Guycha Muele was really matched tough in his debut, taking on Kingston’s Germaine Brown (six straight wins) in a scheduled six. A right to the side of the head flattened Muele by the ropes in the second, and although he clambered up in time referee Lee Cook signalled the end after one minute 32 seconds.

Brown quickly found the target with rights in the first, and when Muele landed one of his own it had no effect. The shorter Muele had the right idea, trying to press forward and get close – but had no answer to that match-ending right.

There was a happier debut for Luton southpaw Jahid Munim, who comfortably outpointed Ilias Liokaftos, a Greek based in Guildford, over four. Referee Cook scored it 40-36.

Munim used his reach, pressing forward and picking his shots. Liokaftos held and covered up – and his punches generally fell short.

Romania’s Lucian Atana made it two in a row, both early, when he KO’d Hoddesdon’s fleshy-looking Colin Goldhawk in one minute 10 seconds of a scheduled four.

The taller Atana started by using the jab then landed a right uppercut and opened up with both hands. Trapped on the ropes, Goldhawk took a barrage, finally going down on one knee to take referee Cook’s count.

The shorter Ziausys ploughed forward, aiming to land in close, and Thorley’s face was marked up by the end. But Thorley controlled throughout, scoring well at range and frequently opening up with both hands.

Robinson took charge from the beginning, and Cantillano finished with swellings on both cheeks. The Spaniard showed grit, and started coming into things more in the second half, landing some counters and trying to mount attacks in the last two sessions. But Robinson showed he could score off the back foot as well, and ran out a clear winner.

Corcoran kept up the pressure while Hallett looked to move and stay out of trouble. Hallett tried coming forward in the last, and landed a good right to the head – but Corcoran absorbed it, and came back on the attack.

Mo Prior promoted for Priority Promotions.

The Verdict Not pretty, but Price is Area champ.