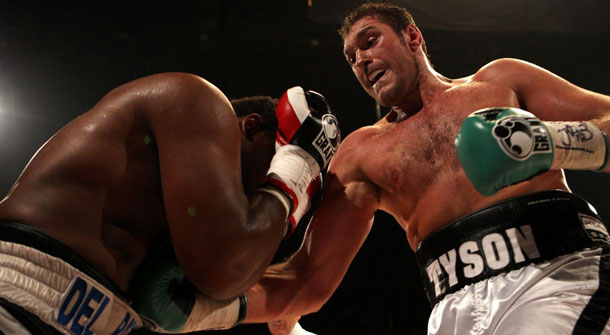 EVEN if boxing promoter Frank Warren had invented the time machine, nipped back to 1966, and dragged a peak Muhammad Ali back to 2014 to take the injured Dereck Chisora’s place against Tyson Fury this Saturday, certain fans would complain.

There seems to be an awful lot of unjustified criticism, some of it very angry indeed, surrounding Alexander Ustinov’s promotion from Chisora’s sparring partner, to Fury’s opponent. Why? What do people really expect at three days notice?

In Ustinov we have a world ranked fighter – as high as No.8 with the IBF – who has only lost once in 30 fights, and ended the career of New Zealand slugger David Tua in his most recent outing. Granted, the Russian is not the most talented fighter in the division and it seems unlikely he will spring the upset on Saturday night, but his late inclusion on a bill devastated by Chisora’s withdrawal should be exceptionally welcome.

Who would have been a better option than Ustinov? Anyone expecting division leader Wladimir Klitschko to down tools, break away from training camp for his September clash with Kubrat Pulev and nip over to Britain to take on Fury should ask their carer to tighten the buckles on their straightjacket. Likewise, and for the same reason, Pulev is staying put. WBC champion Bermane Stiverne looks set for a maiden defence against Deontay Wilder so that’s two more names ruled out. WBA ‘regular’ champion Ruslan Chagaev would not fight Fury in a million years, let alone at 72 hours notice.

Fighting a ranked fighter at short notice is riddled with danger. Lennox Lewis nearly came unstuck when he took on late, late substitute Vitali Klitschko at the beginning of the century, and before that, huge underdog Bert Cooper gave Evander Holyfield all sorts of problems when he stepped in with days to go. The substitute fighter might well have a ‘sparring partner mentality’ but the ‘nothing to lose’ mindset is certainly one to beware. Without doubt, Fury has more to lose.

Let’s give Fury and his team immense credit for taking this contest against Ustinov. Even if you loathe the gypsy’s pantomime tongue, denial of his courage is foolish. He has been training for Chisora for several months now, a man five inches smaller than Ustinov with a completely different style. One can also be sure he will not be getting as big a purse to face the replacement, as he was for his British rival. What Fury wants is a fight, and he wants it against someone that will enhance his reputation. Ustinov has only lost to the aforementioned Pulev – undoubtedly the leading contender in the division – and although the Belarus giant is a clumsy, straight-up boxer, he is not programmed to come in and fall down.

Fury could have waited for Chisora to return to fitness, or he could just have waited for a world title shot to land his gargantuan lap because in all likelihood, one would have done. What he has decided to do, though, is take on a highly-ranked heavyweight, without any time at all to tailor his training for his new opponent.

Frank Warren, and Mick Hennessy, the promoters of this show, also deserve kudos for making this contest for Fury. It would have been easy to play safe, pick a durable albeit unthreatening foe, one who wouldn’t demand paying as much as Ustinov, and feed him to Tyson. They could have gone cheaper still, and not found a replacement at all, and thus Fury wouldn’t have to be paid, either. But they didn’t do that. They have delivered the best possible solution to the problem created by Chisora breaking his hand (while sparring Ustinov, no less).

Fury-Ustinov lacks the spice of Fury-Chisora II, and will no doubt lack the thrills, but what the Manchester bill no longer lacks is a meaningful heavyweight contest. And anyone with a even just a passing interest in boxing should be be grateful for that.