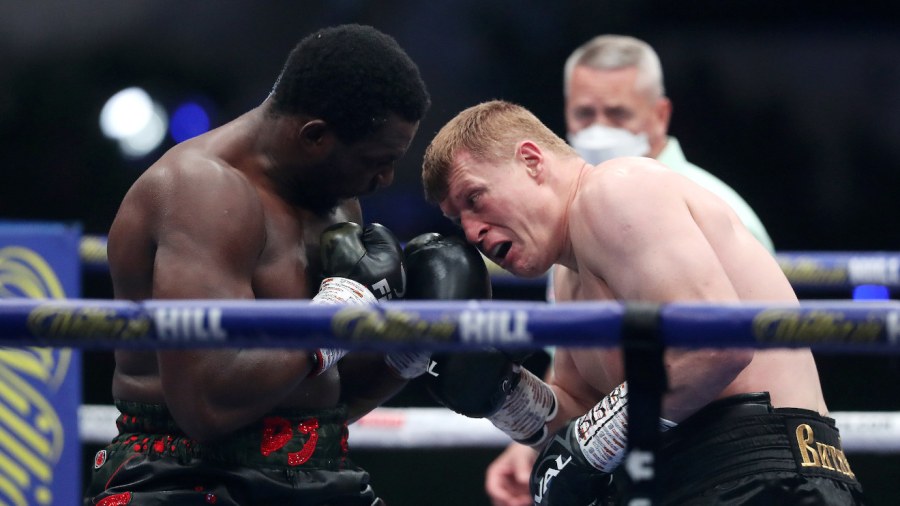 JUST when it looked like Alexander Povetkin was on his way to a punishing defeat to Dillian Whyte, the Russian veteran uncorked an astonishing left uppercut to knock the British heavyweight cold.

Whyte, with new trainer Xavier Miller in his corner for the first time, had begun well enough. He landed his long jab, probing Povetkin with hard crosses. In the third round the two men exchanged attacks to the body.

In the fourth round however Whyte dominated. His right drove into Povetkin’s chin and a left hook knocked him down. Fighting up close, Whyte scooped his left up, landed flush and knocked the Russian down for a second time in the round.

The Londoner appeared to have taken over. But Povetkin upended him in the fifth. 30 seconds in, he slipped to his left, perfectly positioned to blast his left uppercut fully into Whyte’s jaw. It sent the big man crashing through ropes, slamming into the boards of the ring. There was no need for the referee to count to 10. Dillian Whyte would never beat that count.

Whyte has been the perennial mandatory challenger for the WBC heavyweight title, without getting a shot at the belt. Povetkin has seized that status from now. Wherever Whyte goes from here it’s going to be another hard road from here.

But with implausible resilience and workrate, Persoon ploughed through the shots and laid into Taylor with unrelenting attacks. It drew Taylor more often into furious exchanges as the contest progressed.

Both finished badly bruised, a huge swelling under Persoon’s right eye and she suspected she’d broken her nose. Taylor had a lump sprouting out of her forehead after an exhausting 10 round clash.

The two were hard to separate yet again, although judge Victor Loughlin had it a far-too-wide 98-93 for Taylor. Mark Lyson and John Latham scored a closer 96-94. But all three had Taylor winning.

Persoon would have been within her rights to feel aggrieved but instead she said, “This time I respect the result.

“I could not hurt her this time. And if you don’t hurt her, she’s technical, she’s good.”

“It’s never going to be an easy fight against Delfine, she’s relentless,” Taylor said. “What an amazing two fights for women’s boxing.”

But she added, “I think it was a lot more convincing tonight.”

Chris Kongo impressively knocked out Luther Clay at 2-44 of the ninth round of their clash, scheduled for 10. Clay had pursued him, sinking hefty shots into the body. But Kongo maneuvered round him, using footwork and solid jabs to pick up rounds. But he also burst onto the offensive. In the fifth round he had Clay reeling and piled in with combinations. He hurt Clay again in the ninth and applied a quality left hook to drop and stop his opponent.