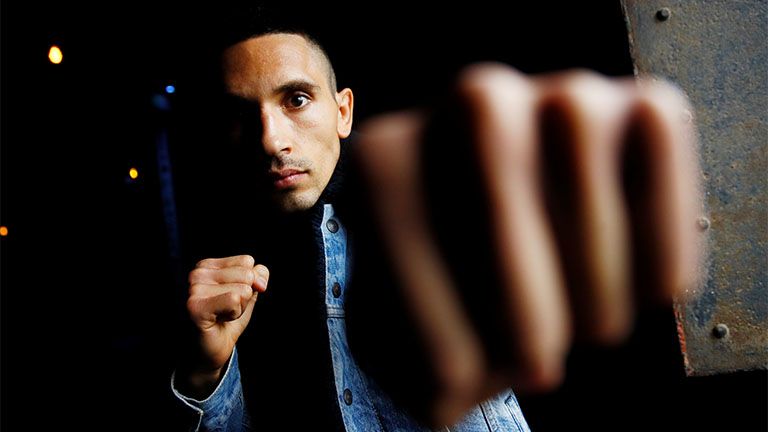 Harry Scarff and Jack Flatley take over from Alex Dilmaghani as the main event in Bolton. Andy Whittle reports from ringside

A CLEAR plastic bag on the dressing room floor at Whites revealed what moments earlier had been the contents of Nicaraguan Francisco Fonseca’s stomach – though the sheer amount of the stuff made one wonder if not only he but several individuals had contributed to its volume. Rumours abounded at ringside, as they do at such a time, when just before he was due to take to the ring in the headliner against Crayford’s Alex Dilmaghani, word spread that Fonseca had been taken ill; the bizarrest of which suggested he might be allowed to box an hour or so later if deemed fit.

Thankfully it proved just that – a rumour – and the English super-welterweight title bout between Bolton’s Jack Flatley and unbeaten Derby challenger “Horrible” Harry Scarff was duly promoted to bill-topping status.

While there might not have been too much daylight between the pair in the opening two or three stanzas, by the fourth the busier Harry was beginning to warm to proceedings; a point emphasised when Jack was left holding momentarily after shipping a heavy left upstairs and a follow-up right.

Scarff’s biggest danger was seemingly the threat of a point deduction, with referee Mark Lyson lecturing him on more than one occasion for holding and hitting.

Harry’s wide-legged southpaw stance meant that at times Jack was struggling to get close enough to land anything of any real note. Responding to his corner’s exhortations to press forward, the Derby man made sure late on with a greater percentage success rate and being equally effective on those occasions he switched to orthodox.

A particularly strong closing session, which began with Harry landing a huge looping right, left onlookers in little doubt as to whose arm was going to be raised at the finish.

Judges Mike Alexander and Phil Edwards had Scarff a 97-94 winner at the finish while John Latham had it a whisker closer at 96-94.

An eliminator over 10 for the English super-middleweight title, a North West derby to boot, pitched Darwen’s Mike Ellison in against Ashton-under-Lyne’s unbeaten Charlie Schofield – and saw the former emerge victorious to the tune of 95-94.

That was despite Ellison’s having been docked a point by referee Mr Edwards in the penultimate session when his gumshield was lost for the umpteenth time.

Despite conceding height and reach advantages it was Ellison who for long periods was the aggressor on the front foot and taking the fight to his opponent. While Charlie, who didn’t follow his jab in as often as he might have done, did make a better fist of it in the latter rounds he simply had too much ground to make up.

The Wigan man had won all seven previously but was unable to prevent his Digbeth opponent’s good run of recent form continuing.

Staying on the front foot and scoring with regular bursts to the head, Fields remained strong throughout, bloodying Fleming’s nose in the fifth as he further stepped up the pace en route to securing the 58-56 verdict of third man Edwards.

Promoter’s son Michael Hennessy Jnr had a good learning fight and banked his second paid win, sneaking home by the narrowest of margins, Phil Edwards seeing him a 58-57 six-round winner over experienced late sub Alistair Warren of Huddersfield, who at just over the super-middleweight limit was a full division heavier.

Not for the first time Warren fell victim to a cut, this one coming when heads bashed as early as the second round and left him with a fair amount of claret above the right eye. It didn’t curtail his ambitions though and for the most part he gave as good as he got, even after a halt was called late in the fourth to allow a doctor to have a closer look at that wound.

Wigan first-timer Rhiannon Dixon didn’t disappoint, dominating her four-twos against Lithuanian lightweight Vaida Masiokaite from the first bell through to the last, flooring her in the very opening moments after making a whirlwind start.

Truth told, the outclassed lady from the Baltic barely landed a shot throughout and Darren Sarginson’s score of 40-35 came as no surprise.

Another victorious over four and also overseen by Mr Sarginson was Delph’s Andy Kremner who, after a close opener, duly widened the gap between himself and Lee Gunter, the Cannock man proving game but still finding himself on the wrong end of a 40-37 decision.

Manchester’s Sam Omidi was less than impressed when, after having been tagged coming in and sent to the canvas inside the opener against Wigan’s James Moorcroft, he was deemed by third man Sarginson to be in no condition to continue The end came with 10 seconds of the first – of a scheduled six – still to run.

Early finishes were the order of the day too in a couple of further contests handled by the same Manchester official.

The first came in the evening’s curtain-raiser between one-fight Stockport novice Jack Booth and Liverpool’s Lithuanian-born Genadij Krajevskij. Heavily-tattooed Booth, having banked the opener, brought an early end to proceedings midway through the second when a clubbing left sent Krajevskij over sideways. Genadij rose but was clearly in no position to continue and it was rightly waved off with 71 seconds of the round remaining.

Meanwhile, there were only two rounds boxed of a bout between Stretford’s unbeaten Bradley Rea and Stranraer’s bearded Paul Allison whose corner, with their charge trailing on the cards and nursing a growing swelling beneath the left eye, signalled to the official that they wished to retire their man.

The Verdict Big win for Scarff with his fight getting the Channel 5 TV exposure.