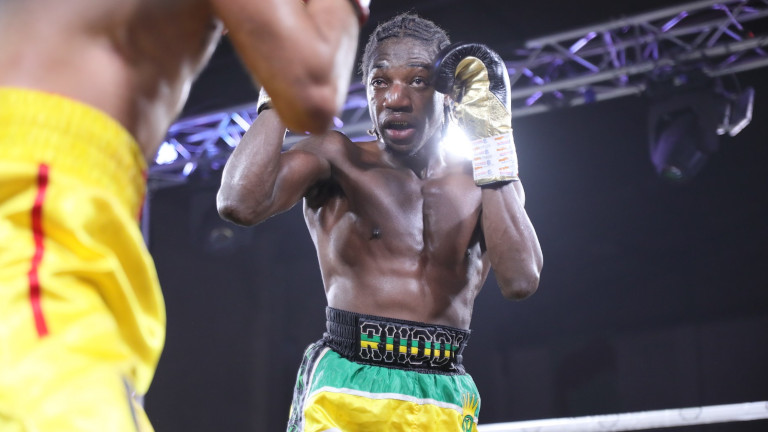 IT wasn’t a bad night’s work for Akeem Ennis-Brown atop MTK Global’s latest Wednesday night offering inside the Production Park Studios in South Kirby. The spidery 24-year-old, from Gloucester, nabbed Philip Bowes’ Commonwealth super-lightweight title and added the British belt to his waist following a 12-round unanimous decision victory.

The bout wasn’t particularly exciting but both fighters gave this gruelling encounter everything. It was scrappy at times and difficult to score. Bowes, the stockier man, landed the cleaner shots early on – particularly from his left hand –  but Ennis-Brown, boxing out of a southpaw stance, was the busier.

In the fourth, after the crouching Bowes had been bundled to the floor for the second time, referee Phil Edwards instructed both men to tidy up their work, break when he called break, and ‘cut the talking out’. In the same round, a red lump above Bowes’ left eye (which was caused by a clash of heads) opened after a slashing right hand hit the target.

Bowes – who at 36 was bidding to become the oldest 140lbs British champion in history – was penalised a point in the eighth for excessive holding as the herky-jerky Ennis-Brown, relentlessly firing his fast hands, started to take over.

But Bowes never stopped trying to solve the problem in front of him. He scored with a big right hook and clumping left in the 10th and Ennis-Brown, snapped out of the comfort zone he’d created for himself, was soon nursing a deep gash over his right eye.

“I’m really pleased to win these belts,” said the winner. “My whole city has been backing me. I’m happy to be the first person from Gloucester to hold these belts.”

In chief-support, Dan Azeez – whose mother recently beat coronavirus after a long battle – retained his English light-heavyweight strap with an impressive ninth round stoppage victory over gym-rival Andre Sterling. The Londoners – Azeez from Lewisham with Sterling representing New Cross – have shared plenty of sparring rounds in the past and, we were told, bad blood existed between the pair as a consequence.

Sterling was cut in the second, counted in the sixth after touching down following a right hand, and finally rescued by his corner when under fire in the ninth. Mr Foster accepted the towel and called a halt to what was becoming a mauling at 1-59.

There was also history between Brighton’s Harlem Eubank and Sheerness southpaw, Martin McDonagh. Eubank had lost to McDonagh twice during their amateur days and he again had problems with his awkward foe.

Wild at times as he looked for highlight reel revenge, Eubank was pressed and countered through the middle in the early going. But McDonagh couldn’t sustain his advantage. By the fourth round the tide turned. Eubank threw looping blows to head and body, bullying his rival.

In the eighth and final round, with McDonagh under serious pressure, the pair landed meaty right hands at the same time. Eubank’s head jerked backwards but McDonagh’s legs wobbled. Eubank flung in another right to drop his foe. Referee Lyson completed the count, with McDonagh trying to rise, at 2-36.

Belfast’s emerging Padraig McCrory thundered through Darwen’s Mickey Ellison in just 70 seconds. The big-hitting Northern Irishman caught his foe with a looping right hand. Stunned and scrambling to retain his balance, Ellison – who last year upset Charlie Schofield – could not avoid the powerful shots coming his way. A left hand slammed him into position to take a huge right hand on the jaw. Ellison fell backwards to the floor, dizzily hauled himself up, but was correctly rescued by Mr Lyson. It was scheduled for eight.

Another quick winner was Sidcup southpaw Elliot Whale. Arbroath’s Corey McCulloch was 4-0 going in but was soon nursing his first defeat when a savage left to the body dropped him. He got up, but could not continue. Mr Lyson’s stoppage came at 1-57 in the first of the scheduled six.

Also set for six and finishing inside the distance was Coatbridge’s Mark McKeown’s fourth round victory over Prestwich debutant, Levi Dunn. McKeown controlled the action from the start, steady pressure raining down on Dunn before it Mr Lyson called it off at 2-30 of the fourth.