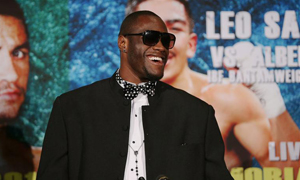 EVEN Floyd Mayweather can’t carry on forever. But when he retires, whenever that might be, Deontay Wilder wants to take over as the next American boxing superstar.

“I’m definitely that new face of boxing. You’ve got an American heavyweight champion of the world, he’s right here,” Deontay said of himself. “The heavyweight division is exciting once again. This is just the beginning. The potential for it. You’ve got a champion that’s got charisma, is exciting, a silly guy and has got all the tools to make this thing bigger than it has ever been in years. I’ll just tell people to buckle their seat because it’s going to be a long ride.”

He already has the WBC crown but Wilder has set himself a deadline to acquire the rest of the heavyweight titles. “Maybe in two years’ time all the federations want to come together and have one belt anyway, I’m looking forward to that as well too. By that time I want to have all the belts. That way they won’t have to worry about the heavyweight division,” he said.

The next stop is Eric Molina, who should be an easy first defence. But the event, in Birminghan, Alabama, will be significant. “I’m from Tuscaloosa, Alabama, but the state of Alabama,” said WBC champion. “They say Deontay Wilder’s number one in Alabama, football’s number two. That’s how it should be. Boxing is a worldwide event. I want to take advantage of that. I’m going to bring the state of Alabama their first heavyweight title fight in history and I love making history.

“I want to have my own Alabama Vegas.”