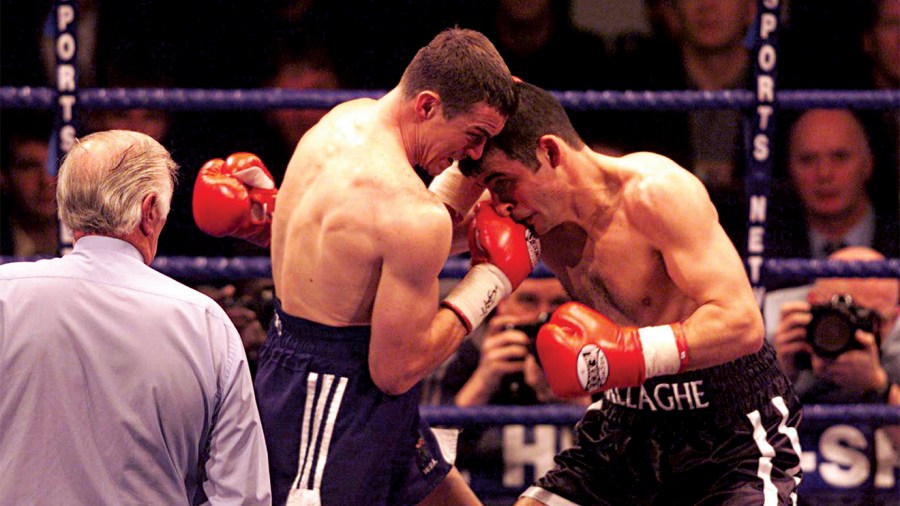 FOR a few seconds, Richie Woodhall was Brad Pitt. Put another way, Pitt was Woodhall. “I’m not sure he goes around Hollywood saying that,” laughed the former WBC super-middleweight champion, “but he could if he wanted to. And if I was single, it would be a good line to say I was Brad Pitt.”

Woodhall was Pitt’s stunt double in the fight scene towards the end of Snatch, the 2000 Brit flick loosely based on the unlicensed fight between professional Johnny Waldron and underworld enforcer Lenny McLean.

“I’m on screen twice for about two seconds each time,” said Woodhall. “It’s in the fight scene at the end. You see me get hit, go down and get kicked around the floor. I remember going to the studios and there was a caravan with my name on the door. Next to it was what looked like a mobile home where Brad Pitt had been staying. He went the day before I got there. I was gutted.”

Woodhall has also appeared in several films written and directed by Birmingham man-about-boxing Jon Pegg, including the award-winning Making Friends As The World Ends and further back, The Wait, a short film set in an away changing room.

“Acting is exactly the same as boxing,” said Woodhall, “because it’s a performance – and it’s all about relaxing and technique. The best actors and the best boxers are relaxed and have a good technique.”

Woodhall was a very good technical boxer and his skills took him to bronze at the 1988 Olympic Games in Seoul, Commonwealth Games gold and the WBC championship. Listening to his punditry, you would never know any of the above because, refreshingly, Woodhall never makes mention of his own career. That’s because the married father of three does his research and has stayed in the sport. After a spell training professionals, he’s worked with the Great Britain amateur squad as a consultant coach for the last decade.

When he does choose to talk about his own career – and he takes some convincing – Woodhall has stories of fighting both Roy Jones Jnr and Joe Calzaghe. The Jones fight came in the semi-finals of the Olympics.

“I remember my coach, Kevin Hickey, telling me: ‘This American is very, very quick,’” he recalled. “Kevin said: ‘You can’t make mistakes against him, you have to get behind the jab, get him to make mistakes.’

“He had this relaxed, low guard that was a trap. You thought you had him, he slipped away and hit you with three or four punches from all angles. He would throw them from his knees – even from his ankles. He was special, very, very quick, and seemed to have this natural ability to not get hit. He was very hard to catch cleanly. His speed and power improved as he went on, but he always had that way of not getting hit and that’s natural, I don’t think you can teach that. If you look at the [Bernard] Hopkins and [James] Toney fights, they barely laid a glove on him. Jones came out of those fights without a mark on him and they were great, great fighters themselves.”

The fight with Calzaghe would be Woodhall’s last, a 10th-round stoppage defeat in December 2000. At the start of his pro career, Calzaghe boxed on Woodhall’s undercards and Richie said: “Straight away, I thought he was going to be special. He hardly got hit and had power. Back then, he was a young man on the way up and didn’t give out many compliments, but I remember Terry Lawless telling me I must be doing well because I had even impressed Joe. He said Joe really rated me. He liked the way I boxed and trained. I was known for training hard. There was a mutual respect there.”

That remained in the build-up to Woodhall’s challenge for Calzaghe’s WBO super-middleweight championship at Sheffield Arena. “I knew it was my last chance,” said Woodhall. “I had had enough of boxing mentally, but Joe was the best out there and I didn’t want to finish my career without facing the best there was. Every fighter can be beaten and my dad [and trainer, Len] looked for Joe’s flaws. There weren’t many. But it never entered my head for one second that I would get beaten.”

Woodhall knew how Calzaghe would box, but couldn’t fathom out a way to beat him. He said: “Predominantly, Joe was a counter-puncher. He would rather you lead and then he punishes your mistakes when you fall short. He wanted to draw you out of your shell and was very good at avoiding shots and coming back very quickly.

“Joe breaks you down physically and mentally as well. You can’t hit him and he keeps hitting you. It’s very demoralising and very hard to stay positive during the fight. When he was throwing a lot of very, very fast shots, I think a few may have been incorrect, but only a few and when he had an opponent going, he hit hard enough to finish them.

“Joe was a great all-rounder. Not a good all-rounder, a great all-rounder. If you wanted a toe-to-toe scrap, he threw powerful hooks at short and mid-range and there was nobody better on their toes. Joe did a bit of everything. His hand speed was very good and so was his work rate. He wasn’t a devastating puncher, but they all hurt and he hit hard enough to knock guys out. His movement made him very difficult to hit. For a boxer who took the fight to you and liked to box at short and mid-range, he was very hard to hit. I did catch him a couple of times – and I could punch a little bit – but they bounced off him. Joe took everyone’s shots.”

Like Calzaghe, Woodhall was coached by his father. Richie compiled a 92-18 amateur record and when he turned professional after winning the Commonwealth Games in 1990, Len went with him. Richie has said his father could read a fight as well as anyone and when he fought Vito Gaudiosi for the vacant Commonwealth title in April 1992, Len knew exactly what his son needed to do.

“Dad said work behind the jab and whip the right hook around the guard,” said Woodhall, “and he was spot on. After about a minute, I whacked him and he went down. I thought: ‘Come on, get up,’ but he couldn’t. He said afterwards: ‘I couldn’t get my senses.’”

That fight was at the Ice Rink in Telford, Woodhall’s hometown, and that was also the venue for what proved to be one of his hardest fights, against Silvio Branco, for the vacant European championship.

“That was the first time I boxed anyone around the same size as me,” he said, “and he was a tough, tough kid. Up to then, I had won all my fights behind the jab, boxing sensibly, and that night, I was dragged into a war. It must have been very even before the ninth. I caught him and followed up, but the round before that, I nearly went. That was probably my hardest fight and one of my best performances.”

Woodhall made two defences of the European title, making him the mandatory challenger for WBC champion Keith Holmes. “He was a nightmare, a tall southpaw who was better than he was given credit for,” said Woodhall of his 12th-round stoppage defeat in Upper Marlboro, Maryland in October 1996. “After the Holmes fight, my contract with Mickey Duff ran out, I went to Frank Warren and he made things happen.

“I had one fight at 12 stone [168lbs] and then I got a phone call saying: ‘Do you want to fight [Thulani] Malinga for the world title?’ Malinga had beaten Robin Reid and Frank had an option on him. Dad told me: ‘You won’t stop him, he’s tough. It will be a 12-rounder and he will come for your body, looking to soften you up downstairs.’

“I did so many sit-ups to toughen up my body and I stuck to my game plan. I controlled it with my jab, whipped a couple of rights around his guard and then went back out to safety. As the fight went on, they thought I would slow down, but I kept the tempo going. I had trained really, really hard.”

That was followed by the anti-climax of a first defence that Woodhall admits he was lucky to win. “It should have gone the other way,” he said of his fight with Glenn Catley. “I was supposed to fight [Vincenzo] Nardiello, so I was geared up to fight a southpaw and I was really disappointed when he pulled out. I was deflated.”

After scraping past Catley, Woodhall did get his hands on the Italian and stopped him in six, before quality German southpaw Markus Beyer took his world title off him. “I had been out for a while [eight months] and probably needed another fight before that,” said Woodhall. “I was a bit stale and the Germans got it right. He started quick, broke my nose in the first round and dropped me. I finished strongly and had him going in the last. I needed 15 rounds that night. They wouldn’t give me the rematch.”

Beyer won unanimously on the cards by margins of one, two and four rounds. The loss to Calzaghe was only Woodhall’s third defeat in 29 fights and though 32 years old and troubled by a right elbow injury that required surgery, he looked set to fight on.

“I was supposed to box Toks Owoh,” he said, “but I went out for a run and had to walk back. I was in agony. I had two cracks in my lower spine brought about through running all those years. By then, I had had enough.”

Woodhall had other options. From the mid-1990s he had worked as a boxing summariser for Radio 5 and when the BBC started screening Audley Harrison’s fights, Richie moved into television. He is well placed to judge the merits of one of Britain’s current heavyweight hopes, Daniel Dubois, having taken him on the pads when he was with the Great Britain squad.

“Nobody hit the pads harder than ‘Big Josh’ [Anthony Joshua],” he said, “but having said that, the hardest jab was Daniel Dubois’. Daniel has the basics. He is a natural straight puncher and that way, you take fewer risks. I emphasise that if you master long-range boxing, that lessens the chance of you getting hit. ‘Big Josh’ and Daniel did that very well. He can go all the way.”