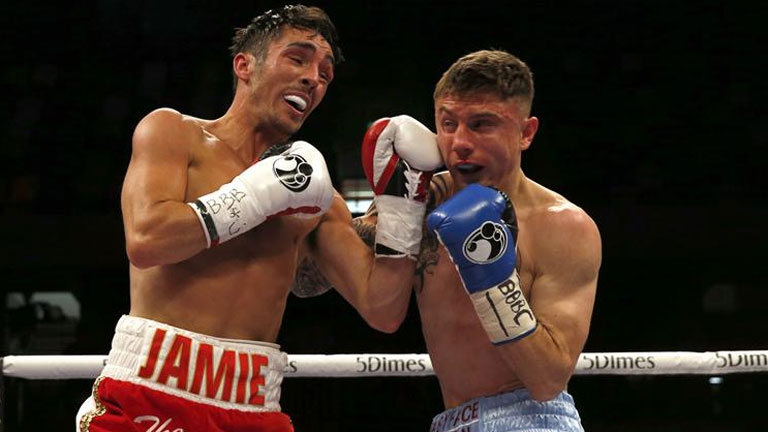 After fight of the year contender, Anthony Nelson tells Peter Mann he would take the Jamie Conlan rematch in a heartbeat

SOUTH Shields’ super flyweight, Anthony ‘Babyface’ Nelson, 11-1 (2), has gone on record saying that he “would have taken the rematch the following day if I could” after a TKO 8 reverse to new Commonwealth champion, Jamie Conlan, 16-0 (10).

Nelson, who went into the 12 round contest at the Copperbox in London undefeated, endured a war with the undefeated Northern Irishman as the two went at each other for near eight rounds, until referee Marcus McDonnell stopped the fight after a body shot finally felled the outgoing champion.

Within seconds of the contest closing though there were calls for a rematch after a fight of the year contender which delighted the audience on Boxnation and showed that Nelson, and his trainer Mal Gates’ prophecy of the fighter belonging at the top level was true.

“Everyone was switched on to what was a really great fight,” said Nelson.

“People enjoyed it and they certainly got value for money so it makes a lot of sense to get it on again. I’ll fight anybody though, if it makes sense; I want those big fights and if something were to come up then I’m there and the gloves are on.”

It’s been something of a state of limbo for Nelson in recent times and, having won the Commonwealth in Newcastle some thirteen months ago (against Jamie Wilson), had only had one outing prior to opposing Conlan (a four round success in Morpeth).

There’ll be no excuses though and, although he doesn’t know what is happening next, as yet, he does know he deserves to be, and stay, at the top table.

“I have a crowd pleasing style and people will always get value watching me, which has to be the aim now, fighting on the big shows with the big names.

“I’ve said it before and I’ll say it again, I’m grateful for what people like Steve [Wraith] and Phil [Jeffries] have done for me in the early stages of my career and, if they were to put on a big fight then brilliant.

“As for the fight with Conlan, well people know I’m a slow starter as it is and I need to be punched in the face and smell the leather first before I wake up, and that’s what happened there.

“He took the first two rounds, scored a couple of knockdowns, as we both did in the fight, then I took the next two and so on. Then, in the seventh, I caught Conlan just above his belt and it was waived away by McDonnell as a low blow.

Now, sponsored full-time by local amateur football club, South Shields FC, and supported by Lee Tiffin at the Black Sheep Fitness Academy and Christopher Davison at Pro Performance, Nelson, at 30 years old, is prepared to continue moving forward and challenge for big titles be it British, European, or a Commonwealth rematch.

“There is talk about the rematch, it’s understandable, but nothing is set in stone just yet – I would take it in a heartbeat though.”