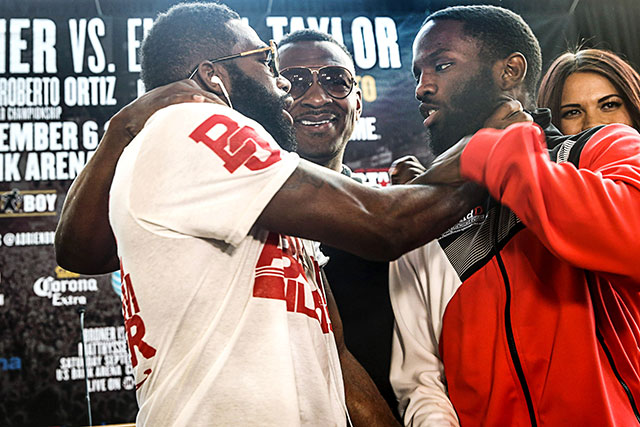 Broner gets typically over excited while Matthysse accepts his invitation, writes Matt Christie

ADRIEN BRONER made a characteristic exhibition of himself at the final press conference to promote tomorrow’s (September 6) 10-rounder with Emanuel Taylor at the US Bank Arena in Cincinnati.

“The Problem” introduced ‘Bronish’, called out Lucas Matthysse – who takes on Roberto Ortiz on the undercard – before putting his arms around the throat of Taylor.

Broner has made a career out of this kind of nonsensical, vaguely amusing, chatter.

“You know you’re not going to win,” he continued. “He’s not coming to win; he’s just coming to not get stopped. I’m going to stop this guy. He’s shaking right now. He already knows what’s up.”

“The Problem” then predicted wins for Andre Berto (over Steve Upsher), and Matthysse.

“This isn’t a joke,” Broner yelped. “There should be three winners on Saturday: two ABs (Adrien Broner and Andre Berto) and then my next opponent, Lucas Matthysse. That’s what’s happening.”

It wasn’t long before Broner and Taylor squared off for the cameras and exchanged words. Broner then reached for his opponent’s throat. It was all pantomime stuff, but should have been avoided nonetheless.

“He [Taylor] didn’t get under my skin, but he invaded my space,” Broner explained. “I’m a man and you have to respect me. I’ve been motivated to knock him out since this fight was announced.  I’m at home, this is my homecoming.  This is what I do at home.”

“I hope it’s true and it’s not just talk like he always talks.”