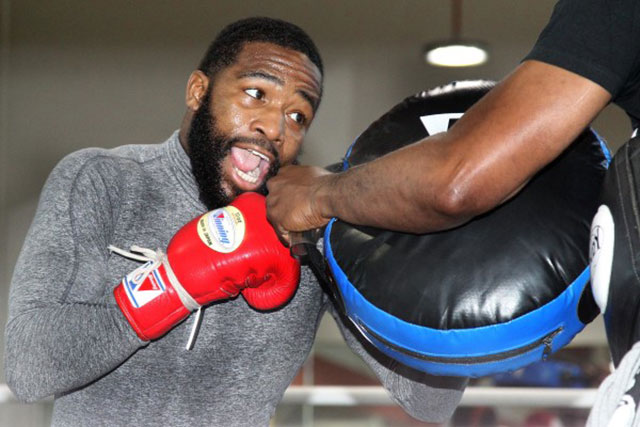 Broner shows flashes of humility before reverting to type ahead of Taylor test, writes Matt Christie

IN a rare moment of regret, Adrien Broner admitted he made mistakes in the past, that his wild and distasteful partying had affected his boxing career. “The Problem” is preparing for his second fight since losing to Marcos Maidana last year – the upset of 2013 – as he takes on Emanuel Taylor at the US Bank Arena in his Cincinnati home on Saturday (September 6).

“Before the Maidana fight it felt like I was unstoppable, I could do anything,” Broner explained. “I could just go back in the ring and everything would be normal. But after the fight I realised I have to slow down. I can still be me and have fun, but I can’t be beating up my body. I have no more flaws. I put down everything. Now I just have fun, I stay in shape and I keep positive people around.”

Broner has since beaten Carlos Molina in an uninspiring performance. Taylor – who was outscored by Chris Algieri in February – is fresh off a mild upset win over Karim Mayfield and fully expects to turn back the highly-favoured Broner, too.

“He was blasted out when he fought Marcos Maidana, and he didn’t look that good against (Carlos) Molina. He stands right there to get hit and doesn’t move around on his feet. I’m a hard hitter, so if I catch him a couple of times it’s going to be night, night for him.”

Broner even showed a touch of respect when asked about Taylor’s chances in the 12-round light-welterweight match-up before his ego strutted into view.

“He’s going to come to fight,” Broner said. “I’m sure he trained to his best, he’s in tip-top shape and he’s ready to go. When people fight an Adrien Broner or a Floyd Mayweather they’re going to come to fight.
“I’m still AB, I’ll give him an ass beating for sure. I didn’t come to play any games. I’m here to kick his ass. I’m not playing around. If I feel like dancing, I’m going to dance. But I’m going to get the job done and it won’t be going to a decision.”