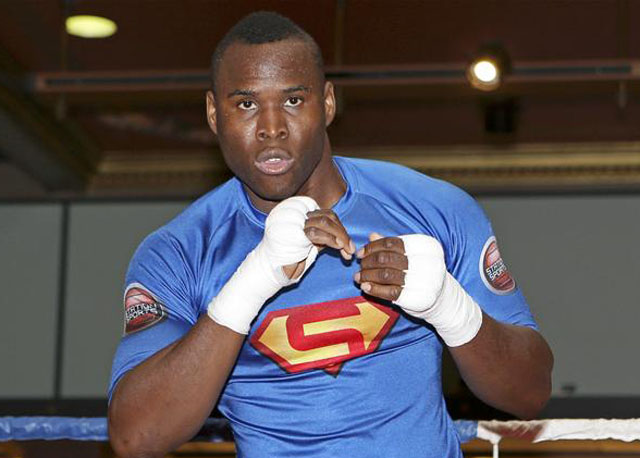 TO prepare for Cameroon native Sakio “The Scorpion” Bika and their World Boxing Council (WBC) light heavyweight world title bout, airing April 4 live on CBS from the Pepsi Coliseum in in Quebec City, defending and reigning champion Adonis “Superman” Stevenson came back to Montreal to train at his new boxing gym in the northern part of the city.

“My first trainer, Tiger Paul, choose the place,” Stevenson explained Tuesday before training for the media. “It is near highways and all of the major roads. It will also allow me to spend more time with my kids and family. I want to help the kids in the gym, too.”

Usually his training camp is in the United States, but for this fight Stevenson (25-1, 20 KOs.) decided to bring his head trainer, Javan “Sugar” Hill, and his sparring partners to Montreal.

“The new Kronk Gym in Detroit, owned by my cousin Sylvia Steward, is not ready,” Hill said. “This is an opportunity for Adonis to train at his new boxing gym.

“Wherever the gym we are at, we still have to do the job. After training, we go back to his home, which is only a couple of minutes from the gym, where he stays relaxed and enjoys playing on his computer.”

Bika (32-6-3, 21 KOs.) was chosen to face the 37-year-old southpaw in the main event on the Premier Boxing Champions (PBC) card, April 4th in Quebec City. Known as a tough and aggressive brawler, the 2000 Sydney Olympian has an impressive resume.

“I expect a really long fight,” the Haitian-born Quebecer Stevenson commented. “Bika has never been stopped and when he lost, it was always against world champions. He is tough and he has heart. He was also a world champion. I will have to be patient, fast and move out of range to win.

“I am also excited to be the first Quebec boxer to fight on a PBC show, on CBS.

The secret card for Stevenson in this bout will be his trainer’s experience with Bika. Hill was in the corner of WBC super middleweight champion Anthony Dirrell for his two fights against the warrior appropriately called, “The Scorpion.”

“With Anthony Dirrell,” Hill added, “we fought a draw the first time and we won a decision the second time. Bika is unpredictable and awkward. He hits from all kinds of angles. Adonis must go back to the basics and punch well to win.”

“Superman” can’t hide the truth: his ultimate goal is to capture all of the world light heavyweight title belts.

To avoid a disaster it is really out of question for him to even think about WBO, WBA and IBF world champion, Russian Sergey “Krusher” Kovalev, at least until his mission against Bika is accomplished.

“My dream is to unify all the titles and become the first fighter from Quebec to do so,” Stevenson continued. “But I’m fully focused on Bika. I know he’s training hard to steal my belts.

“Yes, it goes through my mind, but I have to beat Bika and he (Kovalev) has an IBF mandatory defense before it can happen. And to be honest, his performance versus Jean Pascal did not impress me at all.”

For Hill, to waste time thinking about a Kovalev fight during training camp to fight Bika is simply unthinkable. “We don’t talk about Kovalev in camp,” assured Hill, “only Bika!”