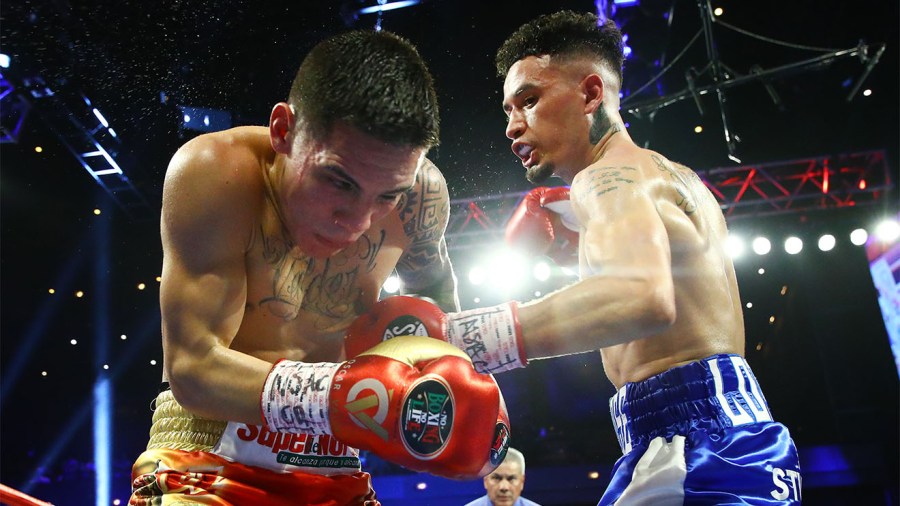 Adam Lopez seized his opportunity to box Oscar Valdez at the shortest possible notice. He nearly scored a sensational upset. And now he wants revenge

ADAM LOPEZ rose to the occasion. When Andres Gutierrez had risen beyond it, considerably, 11lbs beyond the weight he was supposed to make in fact, Oscar Valdez needed an opponent at a day’s notice to step in to fulfil his November 30 slot at the Cosmopolitan in Las Vegas. Fate delivered Lopez the fight he’d wanted but never expected to get.

Lopez had been due to box on the undercard. After he’d weighed in, he was suddenly offered the chance to move up a few pounds and step into the main event. “It was hard to believe, you never see that, 11lbs. You never hear that. It’s crazy. But everything happens for a reason and it gave me the big opportunity to change my life,” Lopez tells Boxing News.

“I’d been wanting to fight Oscar for a long time. When he was at 126lbs, he had the belt right there. I always wanted that fight. I’d seen him fight a few times and once he moved up I thought the opportunity was gone, I didn’t think I was going to get the fight with Oscar. But it presented itself somehow, some way and I was ready for it. I know his style. I know how he fights in the ring. I had no hesitation taking it.

“It was an opportunity I could not turn down.”

When the fight was offered to him at such short notice, he turned to his coach Buddy McGirt and said, “I can beat this guy.”

Lopez understood what he wanted to do to Valdez. “I know he fights off his emotion a lot and I knew as soon as I started making him miss and landing my jab, he was going to start getting frustrated. It was all going to play in favour of me,” Adam said. “He was just trying to go for the kill. That’s what I wanted. I wanted him to lose his gameplan and be reckless.”

“He was preparing for a fighter who was going to sit there with him, fight with him and he had to make a change quick. But for him, he’s a world champion and he had a huge amateur background. Making adjustments should be second nature to him. I had to move quick as well and I don’t have the experience he has.”

It went, at first, exactly as Lopez had imagined it. “He’s used to guys getting in there and banging with him but I wasn’t going to do that. I knew exactly what I had to do. I just stuck to the gameplan and it was working beautifully,” he said. “I think it was my jab that really gave him a hard time and my movement. I wasn’t running completely but I was just taking little steps back, side steps, one step back, making him fall short.

“I felt like I was breaking him down really well.”

Lopez stunned him, dropping Valdez as early as the second round. He considered trying to finish it there and then. “It ran through my head but I also had to see where his legs were at and how he was feeling. His legs were pretty well under him. He was a little dazed standing up. But I didn’t want to press the issue because I know he’s got a lot of experience and he still had his hands right there. I stepped in, he hit me with a good little check hook. I said okay he’s still good so let me just win this round,” Lopez remembered.

Valdez however is dangerous. In the seventh round he caught Lopez and put him down. Adam rose but under another barrage the referee, Russell Mora suddenly intervened and ended it. It was Valdez who would remain on track. “I honestly felt that’s when I was finally back to my senses. If he had stopped it earlier, I would have been okay with it. I was a little dazed. He did hurt me. But the time when he did stop it, I was finally clear, I was clear headed,” Lopez said. “Definitely an early stoppage.”

While Lopez has enhanced his reputation, he wants to make his name next year. “2020 I would love to win a world title, a 126lb world title. Hopefully Oscar gets his title at 130 and I can go up and take his belt, become a two-weight world champion in two years. That’s the goal for the next two years, get my belt and get Oscar,” Lopez said. “I would love the rematch with Oscar, that would be amazing.

Lopez has a purpose. In the long run he wants to represent something bigger than himself. “There’s a lot of people out here who don’t have anybody helping them, boxing really helped me coming up. It really gave me some discipline and showed me what I needed to do,” he said.

“Boxing you can do so much with it. Outside of boxing you could help kids, help families, you could do a lot with boxing. That is also something I would love to do, help out my community, people who need help.”