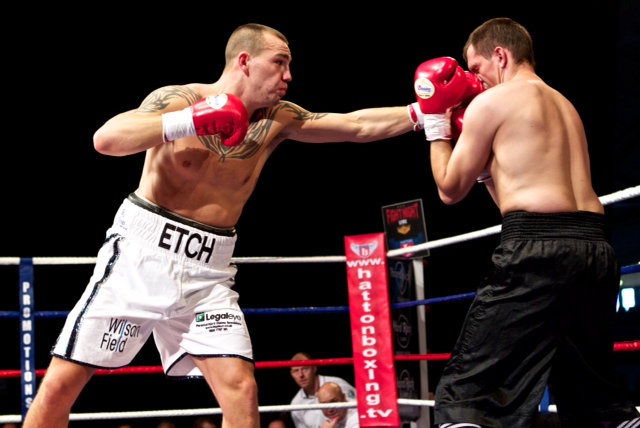 ADAM ETCHES will get the opportunity to bolster his world ranking and add another title to his collection when he faces Brazil’s tough Samir Santos Barbosa at the Ponds Forge Arena in Sheffield on September 20 on the Hennessy Sports promoted event.

The night of championship boxing will be headlined by Kid Galahad, who will be defending his Commonwealth super-bantamweight title.

The event sponsored by MaxiNutrition will be shown live on Channel 5.

‘The Bomber’ is currently rated at number 13 by the IBF, having won the sanctioning body’s Youth titles at both middleweight and super-middleweight. This time he will contest the IBF International title and victory would likely catapult him into the world top ten.

Barbosa is sure to be a stern test, though. The 34-year-old from Rio Grande has won 35 professional fights, is the current WBA Fedecaribe middleweight champion, and has been the full 12 round distance with former world title holder Daniel Geale.

“I’ve not had a chance to have a look at him properly yet, but from what everyone has told me he’s a really tough fighter who will come over here to give me the fight of my life,” Etches, 16-0 (13), said.

“He’s been in with some of the best middleweights in the world and held his own so I think this is going to be the hardest fight of my career so far.

“These sorts of opponents are what I need now. I’m looking to kick on to bigger and better things and beating a good boxer for the IBF International title should move me up the rankings.

“Touch wood, I win this and then I can look for more belts and, who knows, in 18 months from now I could be knocking on the door of a world title shot. Kell Brook won an IBF title at the weekend and if I could go on to the same it would be massive for boxing in Sheffield.”

Tickets for the Hennessy Sports promoted event at Ponds Forge, Sheffield, priced at £35 general admission and £100 ringside are available to purchase by calling the SIV ticket box office on 0114 223 3777.