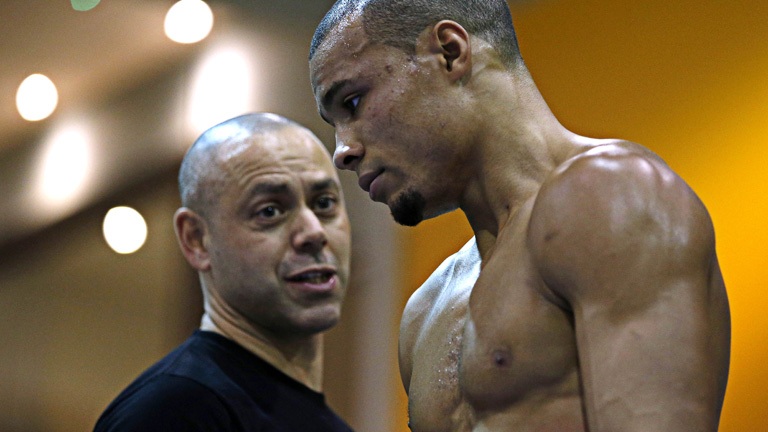 EXCLUSIVE: Adam Booth coached George Groves and Chris Eubank Jr but has so far refused to publicly comment on their upcoming fight. Here, he offers his Big Fight Breakdown to Elliot Worsell

ADAM BOOTH promises me two things: he promises to first talk about the fight – a breakthrough in itself – and then, if I’m really good, promises to provide an honest and definitive answer to the question the whole boxing world wants to ask.

This means more than it normally would because the fight in question, Saturday’s (February 17) WBA world super-middleweight title clash between George Groves and Chris Eubank Jr, is, for all intents and purposes, Adam Booth’s specialist subject on Mastermind. His analysis, therefore, is less of a throwaway opinion – a dime a dozen where this one is concerned – and more of a peek at a Magic 8-Ball: give it a shake, wait for the answer, and invest everything in the reveal.

Booth, after all, spent six years as the coach of George Groves, guiding him to British and Commonwealth super-middleweight titles, and was also in the corner for Chris Eubank Jr’s 2015 fights with Tony Jeter and Gary ‘Spike’ O’Sullivan. During this time he watched both men spar each other on a regular basis and got to know them as boxers, people and, unbeknown to him at the time, future rivals.

Now, with no allegiance to either (“I’m not here for the fight. I’m going away to Monaco,” he says), he is ideally placed to offer an insight unmatched by anyone else in the sport. What’s more, a long-standing reticence, both in terms of talking about the fight and the two men individually, has somehow made the Adam Booth perspective all the more sought-after and valuable. Treat them mean, keep them keen. That kind of thing.

“I’m not going to speak to anyone about the fight,” he tells me. “I’ll just talk to you and that’s it.”

Sometimes we get lucky.

Alternatively, the interview will be published in its entirety in this week’s edition of the magazine (digital: February 13, print: February 15).

Question: When Chris Eubank Jr first entered the Hayemaker gym in Vauxhall as a young amateur ready to spar George Groves, what did you make of him?

Adam Booth: “I didn’t like him necessarily but I admired him. I admired the fact he was prepared to do what he had to do and never spoke or complained.

“There were never too many rounds for him. On one occasion he did six rounds with George and then six rounds with Nathan Cleverly. He controlled pretty much every round. And that was a long, long time ago. He probably only had a few pro fights to his name.

“He has always impressed me with his ability, his energy and his single-minded nastiness. And, let’s face it, that’s what you sometimes need in order to be a good fighter. You need to be self-absorbed, narcissistic and arrogant.”

Q: How good were the spars between Groves and Eubank Jr?

AB: “Very good. In fact, I don’t think either of them ever had better spars in terms of the work they got in. They knew that if they made a mistake they would pay for it.

“There’s only one occasion I can recall when one of them was slightly hurt. That was, ironically, when George caught Junior with a left hook and Junior appeared to be stunned. There was definitely something that happened in that spar because of that left hook. That was probably one of the last spars they had.”

Q: How many times did they spar over the years?

AB: “They did an average of six rounds each time and I’d guesstimate they did that on 30 different occasions. But it might be closer to 50.”

Q: In all the years you watched the two of them spar, did you ever one day think they’d fight each other?

Part 2 of Adam Booth’s Groves vs. Eubank Jr breakdown will be published online tomorrow, while the full interview can be read in this week’s magazine (digital: February 13, print: February 15).