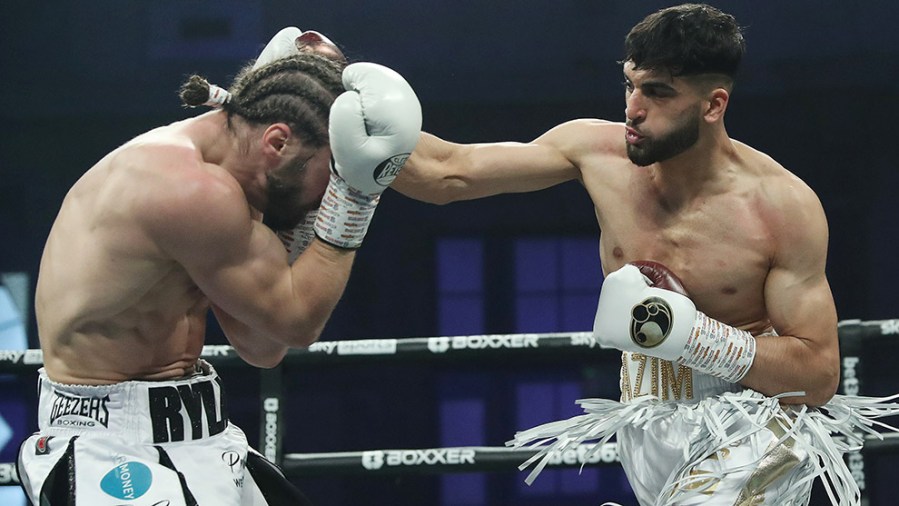 Yes, Azim was expected to win – but it was the manner of victory that impressed. Azim got the job done quickly without rushing or loading up.

Powerfully-built Charlton kept a high guard but simply couldn’t cope with the speed and variety of his opponent, who jabbed smartly to the body then switched back upstairs. Halfway through the opener a right to the top of the head had Charlton (Norwich) on unsteady legs before a left-right put him down on one knee.

A huge left uppercut floored him for another eight count and although he survived the session, the end came quickly in round two. Azim threw a right cross over Charlton’s left that landed on the side of his head and sent him crashing into the ropes, then down. Referee Chas Coakley waved it off immediately after 42 seconds and it was announced as a knockout.

Also ending early was the 12-rounder for the vacant British cruiserweight title that saw Mikael Lawal crowned when David Jamieson retired with a damaged jaw after the eighth.

Jamieson, from East Kilbride, came in at just 10 days’ notice and posed Lawal plenty of problems with his sheer physicality, often pushing the Shepherds Bush man back to the ropes. But Lawal boasted the better technique along with the greater dig and variety of shot, and looked a couple rounds up when the end came.

Uppercuts scored well for the Londoner throughout and when a left hook made Jamieson grab in round six it seemed the Scot was wearing down. He edged the seventh but copped two hard left hooks late in round eight before his corner withdrew him in the interval with blood clearly visible in the boxer’s mouth.

Having featured in one of the fights of the year when stopping Drew Brown in April, Walthamstow’s Sam Gilley had a more straightforward outing when he outpointed Sean Robinson to retain his English super-welterweight title.

After 10 interesting rounds Gilley got home unanimously at 98-91 for judges Foster and Williams, plus 97-93 for Latham. Mr Alexander refereed.

It seemed scorecards might not be required when in round six Robinson (Ruislip) walked onto a crunching right that dropped him hard. He survived the session and was never in big trouble again, but it underlined the difference in power between the pair.

Gilley also had the edge in skills, using his long limbs to control the action once he got down to business in round three. He piled up points with the jab, stung the challenger with a left hook late in round four and, when Robinson took more chances in the later sessions, pot-shotted with sharp rights.

An intriguing super-middle 10-rounder between Lerrone Richards and Zak Chelli fell through when, after the previous day’s weigh-in, Richards returned to his hotel and injured his head in a fall.

And there were bizarre scenes when heavyweights Jeamie Tshikeva (Tottenham) and Joel Ducille (Birmimgham) entered the ring for their six-rounder after the main event – only to have to get out again because the required ambulance was not at the venue (both Jamieson and Charlton had been taken to hospital after their defeats).

The bout eventually went on with referee Sean McAvoy rescuing an under-fire Ducille to give Tshikeva a first-round stoppage.

Sevenoaks super-welter Michael Hennessy Jr chipped away steadily against James McCarthy before buckling him in round four and prompting referee McAvoy to rescue the Liverpudlian with 2-46 on the clock. It was set for six.