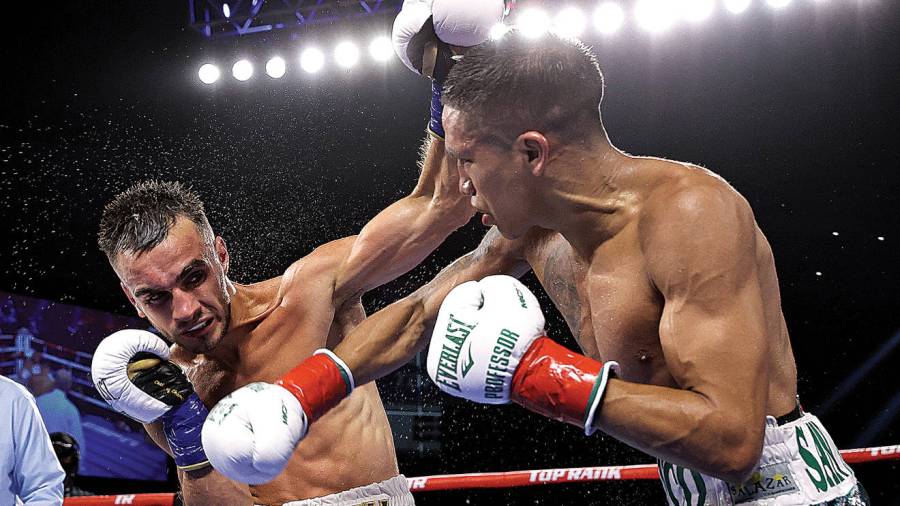 August 13
DUBAI, UAE
In his first fight since January 2020, super-middleweight ANTHONY SIMS JNR (21-1) dropped Argentinian HERNAN PEREZ (8-4) three times before the fight was stopped in the ninth round. Cuban cruiserweight MIKE PEREZ (25-3-1) floored and halted Nigerian TONY SALAM (14-3) in the third round. This was the first fight for Perez in almost three years. After a slow start, seasoned pro AUSTIN TROUT (34-5-1) kept his faint hopes of another big fight alive as he outpointed Mexican ALEJANDRO DAVILA (22-3-2). Some strange scoring, though: 100-92, 97-94 and 96-95 all for Trout. Trout is still a long way from the fighter who outpointed Miguel Cotto in 2012. Argentinian Olympian FERNANDO MARTÍNEZ (13-0) continued his progress with a fourth round stoppage of GONZALEZ GARCIA (18-22-2) at flyweight and Mexican RAMIRO CESENA (13-0-1) took a majority decision over Kazak super featherweight BEKMAN SOYIYBAYEV (12-0) on scores of 78-76, 77-76 and 76-76.

KISSIMMEE, USA
Puerto Rican super-lightweight prospect YOMAR ÁLAMO (20-0-1) floored Mexican ADRIAN YUNG (28-7-2) in the first round but Yung survived and Álamo had to box his way to victory on scores of 100-89, 99-90 and 98-91. In a super-featherweight bout Georgian OTAR ERANOSYAN (9-0) put Dominican JUAN PEÑA (32-4) down in the second and again in the fourth and the fight was stopped. Cuban super bantamweight JORGE DE JESUS ROMER (21-0-1) won a wide unanimous decision over JESÚS MARTÍNEZ (30-14-1) and Tajik hope MEKHRUBON SANGINOV (12-0-1) stopped Mexican JESUS BELTRAN (17-5-2) in four rounds.

MOSCOW, RUSSIA
Russian heavyweight VITALY KUDUKHOV (5-0) outpointed veteran GUILLERMO JONES (41-4-2,1NC) over eight rounds in a roughhouse brawl. At 49, and out of the ring since November 2017, the Panamanian really was there just for the money. Three of Kudukhov’s other wins all came in a one-night tournament.

MARBELLA, SPAIN
KARIM GUERFI (30-5,1ND) rebounded from his crushing first round loss to Lee McGregor to win the European featherweight title with a split points verdict over champion ANDONI GAGO (24-4-4).The fight started badly for the champion as he was cut over his left eye in the first round. From there Gago applied his usual aggressive approach but Guerfi was moving cleverly and connecting with hard, accurate counters and just about deserved the decision. Scores 116-112 and 115-113 for Guerfi and 115-113 for Gago.

HAL LUQA, MALTA
There was some disappointment for UK-based Swede LUCY WILDHEART (8-1) as her original opponent could not meet the COVID-19 requirements for Malta. Instead, Wildheart faced experienced Hungarian EDINA KISS (15-15) in a six-rounder. Wildheart was too strong for the late substitute and the fight was stopped in the fourth.

AUGUST 14
FRISCO, US
VERGIL ORTIZ JNR (18-0) achieved a big win as he floored EGIDIJUS KAVALIAUSKAS (22-1-1) several times on his way to a fifth round kayo victory. Ortiz, the No. 5 welterweight going in, took the first round with some sharp jabbing but it was different in the second. A hard right from Kavaliauskas staggered Ortiz and he looked in deep trouble, holding desperately until his head cleared, then he fired back and had Kavaliauskas reeling at the end of a dramatic round. Kavaliauskas attacked strongly in the third, landing heavily with both hands but just before the bell Ortiz landed a straight right followed by a left hook that dropped Kavaliauskas. The Lithuanian was up at five and when the eight count was completed the bell went before Ortiz could do any more damage. Kavaliauskas was coming forward again over the fourth and fifth but Ortiz boxed well on the back foot and outscored Kavaliauskas in both rounds. Kavaliauskas attacked fiercely in the sixth getting through with some powerful rights but Ortiz went onto the front foot in the seventh, scoring with quick jabs and landing two booming rights just before the bell. As Kavaliauskas walked back to his corner he suddenly had the look of a beaten fighter. It was all Ortiz in the eighth. Kavaliauskas was trying to stay inside but he was driven back and dropped to one knee after a stiff jab to the body from Ortiz. He beat the count but was put down twice more, bouncing up each time before a fifth knockdown saw the referee stop it. All 18 of Ortiz’s wins have come inside the distance. In a super-featherweight fight Venezuelan ROGER GUTIÉRREZ (27-3-1) scored a repeat victory over Nicaraguan RENÉ ALVARADO (32-10). They were very familiar with each other’s style and were both cautious over the first three rounds. Gutiérrez moved in front countering the aggressive Alvarado over the fourth and fifth rounds with Alvarado banging back to take the sixth and seventh. Gutiérrez, No.4 at super-feather, swung the fight back his way in the eighth, catching Alvarado with series of rights and landed a heavy right in the ninth. A cut and tiring Gutiérrez then faded, allowing Alvarado to close the points gap. But after opening a bad cut on Alvarado’s left eyebrow, Gutiérrez just did enough to win the last round. Scores 116-112 twice and 115-113. Gutiérrez is 2-1 ahead in their three-fight series, having been knocked out in seven in 2017 before outpointing Alvarado in January. In a super-lightweight 10-rounder, a slick ALEX MARTIN (17-3) outboxed Honduran JOSEC RUIZ (23-5-3) winning every round with the three judges scoring it 100-90. Ruiz pressed hard but just could not pin down the elusive Martin. At flyweight FELIX ALVARADO (37-2), the twin brother of René, floored and halted ISRAEL VÁZQUEZ (10-4-2) in the first round. Lightweight GEORGE RINCON (12-0) outpointed Russian NIKOLAI BUZOLIN (8-4-1) on scores of 80-72 from the three judges and brother ALEX RINCON (8-0) outpointed super welterweight SANNY DUVERSONNE (11-4-2) 80-72 twice and 79-73.

TULSA, USA
JOSHUA FRANCO (18-1-2,1NC) had to come from behind and dominate the late rounds to get a repeat victory over ANDREW MOLONEY (21-2). In a fast-paced contest Franco scored well with hooks inside to take the opening round but then Moloney took over. Boxing mainly on the back foot, he controlled the action with strong powerful jabs and landed some fierce counters, moving into a good lead after six rounds. Franco was on his way to taking the seventh when Moloney threw a right and Franco went down. The referee gave Franco a count but he protested he had slipped. At the end of the round the referee asked to see a replay, which showed that Moloney’s punch had not landed, and what had been a 10-8 round for the Aussie was changed to 10-9 for Franco. That was a turning point in the fight; Franco got stronger and Moloney slowed. Franco was landing punches that Moloney would have slipped earlier and the Texan upped the pressure. Moloney was able to find gaps for his jab but the combinations he had been throwing earlier were absent. Moloney made the eighth a close round and put in a big effort in the 11th but Franco won both rounds, sweeping the last six rounds to take the decision with all three judges scoring it 116-112. Franco is 2-0 and 1ND in his three-bout series with Moloney.

Twin brother JASON MOLONEY (21-2), ninth at bantamweight, scored a win for the Moloney family as he overcame a slow start to outpoint JOSHUA GREER (22-3-2) over 10. Greer looked to have taken the first two rounds and the third was close but Moloney had a big fourth as he dazed Greer with a right and then had Greer pinned to the ropes and was unloading punches for the last minute of the round. Greer was showing a swelling by his right eye. Moloney built on that success in the fifth and by the sixth Greer’s right eye began to close. Moloney took over, outscoring Greer, and despite an attempt by Greer to claw his way into the fight over the closing rounds, Moloney was a clear winner. Scores 98-92 twice and 96-94 for Moloney. This is Moloney’s first fight since being knocked out in seven rounds by Naoya Inoue in October.

Five unbeaten fighters preserved their 100 per cent records. Sixth-ranked super-lightweight ARNOLD BARBOZA JNR (26-0) outpointed ANTONIO MORAN (26-5-1) on scores of 99-91 twice and 100-90. Barboza controlled this one from the start. He boxed with real skil, opening up Moran with jabs and then landing strongly to head and body. A punch in the second saw Moran nursing a heavy nose bleed and it was subsequently confirmed his nose was broken. Barboza then rocked Moran in the third and fifth rounds. Despite the nose injury, Moran fought back hard but the speed, accuracy and power of Barboza were just too much for him and the judges scored it for Barboza 99-91 twice and 100-90. Super-featherweight ABRAHAM NOVA (20-0) decisioned RICHARD PUMICPIC (22-13-2) 79-73 twice and 78-74 and ALBERT BELL (19-0) eased past JULIO CORTEZ (15-3) winning 80-72 on the three cards. A major shock saw ANDRES CORTES (15-0) kayo Filipino GENISIS SERVANIA (34-3) in the first round and, at lightweight, US 2016 Olympian CARLOS BALDERAS (10-1) returned to action and impressed in flooring FIDEL CERVANTES (9-2-1) twice and stopping him in the second round. In a couple of fights featuring boxing dynasties heavyweight TREY LIPPE (18-0), the son of Tommy Morrison, outpointed DON HAYNESWORTH (16-7-1) with all the judges seeing Lippe the winner at 60-54 and super-middleweight NICO ALI WALSH (1-0), the grandson of Muhammad Ali, stopped JORDAN WEEKS (4-2) in the first round.

SAVONLINNA, FINLAND
Local super-middleweight SANNA TURUNEN (7-4-1) had to fight hard to get a unanimous decision over Georgian ELENE SIKMASHVILLI (9-10). Turunen had problems getting past the longer reach of Sikmashvili but by the third she was getting inside to work. She scored well in the fourth and fifth and took the sixth. Sikmashvili then got back into the fight but Turunen was stronger and boxed her way to a well deserved victory. Scores 98-92, 97-94 and 97-96 for Turunen. Swedish welterweight OSKARI METZO (14-0) had all sorts of problems with the unconventional style of Italian EMANUELE CAVALLUCCI (12-4-1). Metz stuck to his boxing but was never able to subdue or figure out Cavallucci’s style. He took the split decision on scores of 78-75 and 78-76 with the third judge giving it to Cavallucci 78-75.

CORONA, USA
Santa Monica super-lightweight prospect RUBEN TORRES (16-0) pounded on RICHARD ZAMORAR (19-5) then finished him with a body punch in the fifth. Torres’ twelfth inside the distance win.

PORTLAND USA
Light-heavyweight CHARLES FOSTER (20-0) returned to action for the first time in two years with a second round knockout of seasoned Costa Rican, JAIME BARBOZA (21-18).