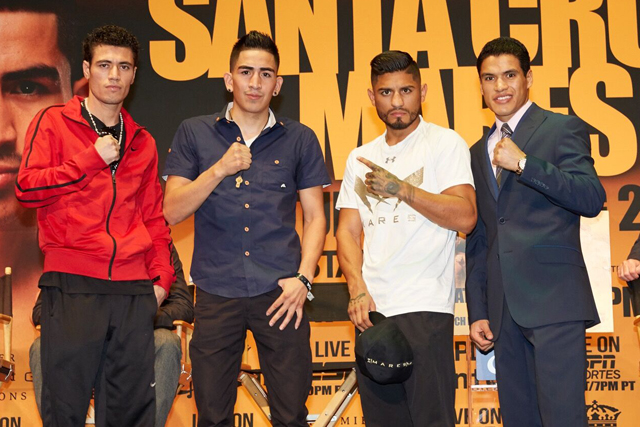 ABNER MARES claims he is willing to travel to Wales and fight IBF featherweight champion Lee Selby in his home country.

Selby was scheduled to defend his title this weekend in Las Vegas, but mandatory challenger Johnathan Barros did not meet the medical requirements of the Nevada State Athletic Commission and so the fight was removed from the show.

Mares subsequently tweeted Selby, offering to fight him at some point in the near future and he reaffirmed that desire earlier today.

“Lee Selby, we had a little Twitter war, I called him out. He wants me to fight him in his hometown, I’m more than happy to,” he told Boxing News.

“I’m happy to travel to Wales right now with him when he goes back. He’s ready to go, it’s too bad I didn’t bring my boxing trunks with me for this fight.”

Mares launched himself back into the featherweight mix last year when he upset Jesus Cuellar to win the WBA’s secondary title.

In 2015, he was outpointed  by Leo Santa Cruz in an electric fight. He was ringside to watch Santa Cruz gain revenge over Carl Frampton this weekend, and hopes to secure a rematch with his old foe.

“It was a great fight, I think Santa Cruz did just enough to win it. Without a doubt Frampton always comes to fight, and it made for a great fight,” he said.

“He did just enough changes to win this fight, and I was surprised. Before, he said ‘I’m going to box this guy, I’m going to use my range and box him on the back foot.’ I thought he was playing, I thought he was just trying to get into his [Frampton’s] head, but he did it. Frampton did not catch that.

“I am looking for a rematch with Leo. I am going to be throwing skittles at Leo’s face until he notices I’m here. With the WBA situation, the fight should be made quite easily. Let’s get it done.”

Selby will remain in America for the next few days while his advisor, Al Haymon, works on the next steps after the Barros fallout. He could box on a show in the coming weeks in a keep-busy fight, before looking at a bigger showdown in the summer.