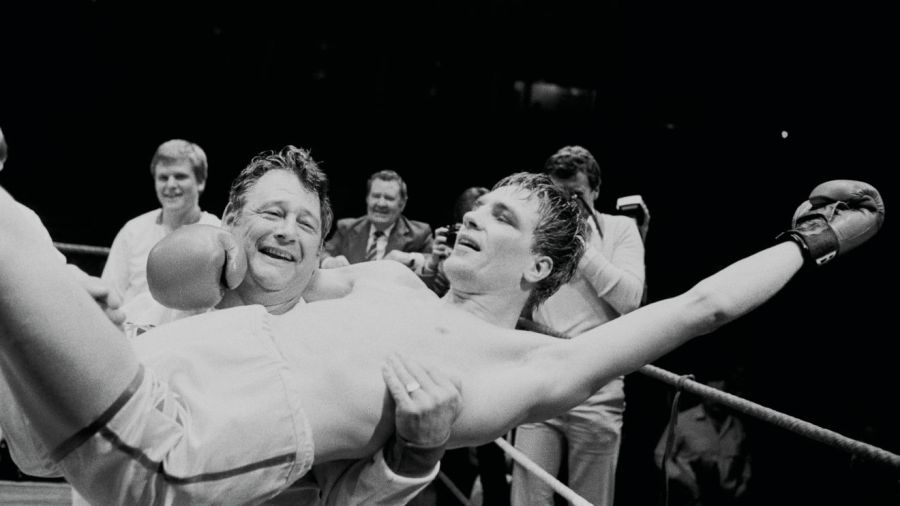 Steve Bunce on Jimmy Cable, a fighter from a different world and one of his first idols

It would be hard to invent the twists, wicked turns, joy and chaos of Jimmy Cable’s boxing year in 1984. Not to mention the rest of his life. After a quick win on cuts in January 1984, Cable was back in the Royal Albert Hall ring 22 days later to win the British light-middleweight title in an old-fashioned war with Nick Wilshire. There was no rest for Cable, he was fighting to never have to decorate a house, paint a wall or labour on a building site ever again. That is called battling a dream.

Cable was 26 at the time. His record after beating Wilshire that night in February was 24 wins in 26 fights.

Just six weeks after the Wilshire win, Cable was back on BBC television as the top of the bill at the Royal Albert Hall. It was April and it was cruel; Mickey Duff, his promoter, had imported a Philadelphia veteran – a man with a thousand rounds of warfare in the gym with Marvin Hagler – called Buster Drayton. The American looked fifty, but Buster was a lethal relic, nearly an extinct breed.

Cable was not comfortable that night, too pale, too drawn. The end was obvious. He fell lightly to the canvas quickly, was given a chaotic quick count and then he ran, he moved back too fast and the most savage of left hooks, watched in agony by everybody in the venue, but missed by Cable, connected. He dropped, still and fast, his head hitting the rope and he was out. It was over after just 85 seconds of round one. The image of Cable sitting on the canvas staring heavily at nothing is still vivid, still horrible. It was still only April.

Exactly one month later, Drayton was back in Britain and he did the same thing to Mark Kaylor, dropping him five times. In 1986 Drayton won a world title.

A week after Kaylor lost to Drayton, just six weeks after Cable had lost to the American, Cable was in Toulouse for a vacant European light-middleweight title fight against Said Skouma. “I just kept taking the fights that were being offered,” Cable told me in 1993. “It was the money – how could I say no?” It was still only May and there was ten grand on the table. Real money to a kid like Cable from Orpington.

The fight finished in the 11th. Cable won and what a fight it was. Cable was dropped three times, given a standing count, was hurt, dazed, but not beaten and he rallied, sending Skouma down in the tenth and again in the eleventh for victory. Doug Bidwell, his manager, collected the purse on the night, tucked the cheque in his pocket and with Cable’s fans (there was a travel deal organised by Alan Minter’s International Sporting Club) enjoyed the Saturday night in Toulouse. On the Monday, back in Britain, the cheque bounced. And it bounced high, my friend.

The French were suspended from staging European title fights. Cable eventually received his money five months later. It was too late to keep him away from the brushes and the British and European champion was back painting Kent houses to support his wife and three children. It was still only June.

In September of 1984 he was back on the road, this time Munich. The travel deal was 109 quid by coach, including three nights in a hotel. It was a European title defence, but Cable lost on points to Georg Steinherr. The following February he defended the British title and in May lost it to Prince Rodney in a fight on Hastings pier. Yes, it had been a pantomime time.

Cable’s last fight with a legitimate licence was in 1988. His final record 41 fights, 30 wins, nine defeats and two draw. He was not rich from the ring, but a minute in his company and you could hear the sacrifice in his voice. Cable had been in the wars.

In 1993 he was part of Reg Parker’s pirate business, the United Boxing Organisation. Poor Reg, who controlled his empire from above a World of Leather showroom in Eltham, had to invent belts to keep giving Jimmy. And, oddly, Cable sounded fresh, a new Jimmy. It was a relief to me. On that dreary circuit, at that age and with hard time away from the ring, he was still the sweetest of boxers. “I made more for some of those fights than I got for beating Wilshire at the Royal Albert Hall,” he said. To get to a fight – to get the right location – was often comic and involved meeting in pubs in Orpington, waiting for the landmark to be revealed and then driving. I went to one in a warehouse in Woolwich. Jimmy seemed to be defending a dozen belts. He was just too good. It was also too sad.

In 1996 Jimmy’s life was badly damaged and it had nothing to do with him. His daughter was an innocent witness to a stabbing death. Her boyfriend was the victim. The killer was known to the police, a serious south London gangster. He had previously stabbed an undercover policeman. His name was Kenneth Noye and he went on the run to Spain, part of a cabal of villains celebrated in folklore. In 1998 he was captured, Cable’s daughter went to Spain to identify him. He stood trial in 2000 and was sentenced to life for the killing. She was a fearless witness. Another witness at the trial was shot and killed six months later and that case is still open. Cable’s daughter was given a new identity and placed in a witness protection scheme – this is real, not a movie. Noye was released in the summer of 2019. “A life sentence should mean a life sentence,” Cable told BBC news in 2017. “Her life has been destroyed.”

In 2011 I saw Jimmy for the last time. We met at a hospital door, both visiting a great boxing trainer called Billy Webster. He was the man who made Cable a fighter at the Fitzroy Lodge; I had been a boy witness in the gym in the late Seventies. Jimmy had been drinking that night when we saw Bill. He was still Gentleman Jim to me.

Sweet Jimmy Cable, a fighter from a very, very old world and one of my first idols.