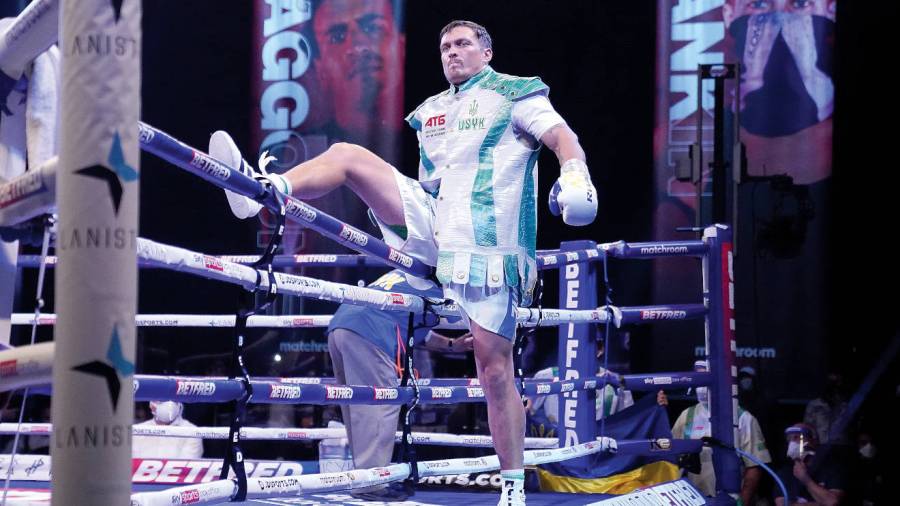 NOT long after cruiserweight king Oleksandr Usyk decided to head to a division only the biggest and bravest cruiserweights dare visit, the WBC decided to create another division to highlight just how difficult it is jumping from cruiserweight to heavyweight and leaving a mark.

In creating bridgerweight (200lbs to 224lbs), the WBC not only offer boxers another weight class in which to win a (for now) meaningless belt but also remind us all it will probably take something special for Usyk to become as dominant at heavyweight as he was as the world cruiserweight champion.

This, of course, Usyk already knew. Now at home there, his first pro heavyweight fight culminated in a seventh-round retirement stoppage of so-so contender Chazz Witherspoon, while his second, a 12-round decision win over Derek Chisora in October, saw Usyk weather an early storm to eventually take control and dominate. In both these fights he showed flashes of the old Usyk – that is, the cruiserweight Usyk – but also showed enough, in terms of flaws, to give the rest of the heavyweight pack reason to feel encouraged ahead of any future fight with the gifted Ukrainian.

“I think it’s been a fantastic start,” said Peter Fury, uncle and former trainer of current WBC heavyweight belt-holder Tyson Fury. “Chisora had been given months and months to prepare for Usyk and arrived in phenomenal shape. That was probably the best version of Chisora we have seen. He used to slap a lot with the inside of the glove but that seems to have gone and he was in the kind of shape that meant going 12 rounds was no problem. Even then, getting on top of Usyk early was the best he could do. He could fight Usyk 10 times and will never do any better than that.”

Dave Coldwell, someone who also has experience training heavyweights (one of which was Chisora), has a slightly different take on Usyk’s early heavyweight form. “I watched Usyk’s fight against Chazz Witherspoon and, though I give him a pass because he had a last-minute change of opponent, he got clipped in one of the rounds and you knew it registered,” Coldwell said. “It didn’t hurt or wobble him but it made him uncomfortable.

“Then he fought Derek and, style-wise, if both were cruiserweights, Derek would be absolutely perfect for Usyk. He would look a million dollars and wouldn’t lose a second of the fight.

“At heavyweight, Derek still, even though he’s got the size and strength, didn’t do anything technically great in that fight. He was just walking forward, swinging punches. He wasn’t even throwing straight shots. He was just winging in whatever he could. But his physical presence alone seemed to rattle Usyk early. It had him uncomfortable and working hard.

“I don’t think defensively his movement was as fluid as what it was when Usyk was a cruiserweight. It makes you think if Derek at this late stage in his career can unsettle him, how would Usyk do against a fighter with more sharpness and freshness and the ability to throw straight punches and shots they are disguising? Usyk saw everything Derek was doing that night but Derek was still able to get to him.”

Ultimately, Chisora, despite his hyperactive start, succumbed to Usyk’s greater nous and movement and was outclassed in the fight’s second half. Some saw the night as a struggle for Usyk due to its uncertain beginning, whereas others viewed the decision win as something just short of a masterclass.

“I don’t see anybody getting in the ring with him and producing more, in terms of pressure, than what Chisora put on him,” Fury said. “So, I don’t see what the problem is for Usyk going forward.

“My opinion is that he has ticked the boxes. You’ve got an 18-stone man of solid muscle, a rough fighter, coming in and throwing everything at Usyk, including the kitchen sink, but not once was Usyk hurt. He just went about his boxing game.”

“That fight set off alarm bells for me,” said Coldwell. “I don’t think he’s the same fighter at heavyweight.

Dave Allen, the recently retired heavyweight from Doncaster, was in camp with Usyk before the Chisora fight and was able to sample the skills of the 34-year-old southpaw during a number of sparring sessions. He took from this experience both insight and, if only briefly, confidence.

“The Usyk sparring was going well for me but in the last 30 seconds I got clipped and badly hurt,” Allen, 18-5 (15), said. “Before that, though, I was in the form of my life. I was giving him a lot to think about and did very well.

“However, in saying that, he is unbelievably talented. I’m not saying because I did well in sparring I would beat him because I wouldn’t. He’s one of the very elite. I’m not sure he beats [Tyson] Fury or [Anthony] Joshua but I’m pretty confident he beats everyone else.”

“The way that we looked at the move with Tony was on a case-by-case basis,” said Coldwell. “We knew he [Bellew] wasn’t going to be the biggest and that going in against the giants of the heavyweight division would be way too much. But David [Haye], although he was boxing at heavyweight and was a little bit heavier than Tony, physically, and in terms of their dimensions, there wasn’t much in it. It was definitely worth the risk.

“The modern-day heavyweights, though, are massive. A lot of them are getting back to where they’re also explosive and can move well, which makes them even more difficult to fight. It’s now such a massive jump for the cruiserweights.”

Another cruiserweight titlist who made the leap to heavyweight in search of the rainbow’s end is Steve Cunningham, the former two-time IBF title-holder at 200 pounds who faced the likes of Tyson Fury, Antonio Tarver, Tomasz Adamek, Amir Mansour and Vyacheslav Glazkov as a heavyweight. He won the USBA heavyweight title during this four-year fling but failed to replicate the success he had as a cruiserweight, eventually returning to his old division in 2016.

“At heavyweight the major thing we were concerned about was heavyweight power. That’s it. It wasn’t the skillset at all. That’s why I was able to do what I did to Fury. That’s why he had to use the tactics he used to neutralise me. Outside of that, hands down I had that fight in the bag.”

It remains to be seen what kind of heavyweight Oleksandr Usyk, 18-0 (13), will become. He could, like Cunningham, find the size difference too significant to land a world title or he could, like Haye, be able to grab a belt from somewhere but not be big or good enough to defeat the very best heavyweights in the division. Or maybe, just maybe, he will replicate Evander Holyfield and become number one.

In the end, a lot will depend on how Usyk deals with opponents bigger and better than Chazz Witherspoon and Derek Chisora and also how his own skills carry into fights in which he can no longer control the distance the way he did against men his own size.

“He could fight the biggest and the best and have a walk in the park,” said Fury. “Or he could realise once he’s in there he just cannot get the distance.

“I don’t think the size is going to matter, though. I think Usyk, coming through that [Chisora] fight, will grow from it. He’s that clever he can make serious adjustments and I think, when the time arrives, he will do.”

Just as confident in Usyk’s chances against the big men is Cunningham, who said: “The only chance any of those big guys – Joshua, [Deontay] Wilder, Fury – have against Usyk is to knock him out. If they don’t, they have to hit him hard enough to hurt him and mean that his skillset is now shot. Outside of that, I don’t see any of them outboxing him or winning rounds against him.

“Fury is the best boxer among those heavyweights, no doubt, but Usyk is like the southpaw version of me to an extent, at least in terms of a Fury fight. He’s going to cause so many problems using the blueprint I established. I can see Fury tying him up and trying to drain him with his strength. Who knows how it goes from there?

“As for Wilder, he only has a puncher’s chance with Usyk. Usyk picks him apart until he gets caught by that right hand. If he avoids it, he gets a decision and maybe even stops Wilder.

“Usyk and Joshua is a better technical fight. Joshua has that speed and that movement and that power but he does have issues with smaller fighters.”

Coldwell, someone who has attempted to crack the Usyk code as coach of Tony Bellew and observed him from the unenviable position of an opponent’s corner, is not quite so giddy about Usyk’s hopes as a heavyweight. In all, too, he has arguably watched more of Usyk than most.

“Usyk as a cruiserweight was a fighter I loved,” Coldwell said. “I must have watched hours and hours of him before we even knew he would be an opponent for Tony. There are just certain fighters you watch to learn from and Usyk, for me, is one of them.

“But I do think this move to heavyweight might not work out for him. There have been fighters throughout history who dominate at a certain weight and then go that one division up and all of a sudden look human. They give up certain advantages and it levels the playing field a bit. This could be the case with Usyk.

“I’ve always fancied him to beat AJ [Anthony Joshua] but now I’ve watched him fight at heavyweight a couple of times I’m seeing that differently. Now I don’t see Usyk beating him.”

Whatever happens, the mark of Oleksandr Usyk’s legacy will likely be a marriage of his cruiserweight achievements and his willingness to move up and provide definitive answers for all who currently speculate about his prospects at heavyweight. Already great on account of his cruiserweight form, he stands only to get greater from here on out, though may, if Coldwell’s suspicion is correct, one day rue not being that little bit bigger.