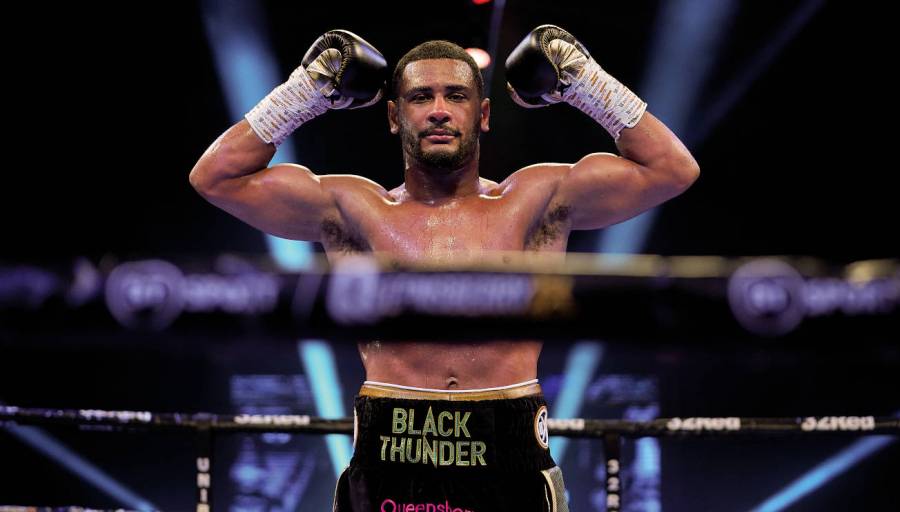 Caoimhin Agyarko wants to break through. He speaks to John Dennen

HE’S not the Irish Canelo, but middleweight Caoimhin Agyarko is looking to make his breakthrough. A stylish boxer, who was brought in as a key sparring partner for Billy Joe Saunders ahead of his fight with Saul Alvarez this year, Agyarko wants to make his own name.

Still just 24 years old, Agyarko is eager to box more regularly in his Belfast hometown. “I’ve got an unbelievable fanbase back home so I want to bring big nights back to Belfast and kind of build my career there. It’s been great fighting over in London and in different venues over here but I want to box back home and start headlining big shows there,” Caoimhin said. “It’s unbelievable, the fans in Belfast and Ireland in general. They always get behind their fighters. Seeing Carl Frampton headline shows through the years and being at those shows and feeling that atmosphere, it’s something I want to do and achieve. With STN and Paul [Ready, his new manager], we will do that.”

He’s 9-0 as a pro and has done little wrong so far. “I’ve been happy but not satisfied. I’m my biggest critic and I know I’m 10 times better than what I’ve shown,” said Caoimhin.

Agyarko has developed his style over an extensive amateur career. “I’ve been boxing since I was seven. So I had roughly about 150 amateur fights,” he said. “I was always an aggressive kid. I was always getting into fights from a young age, had a bit of temper. My uncle used to box for Holy Trinity, my mum just brought me and brother down to see where he used to box. Just from then we both put the gloves on and never looked back.”

“I wasn’t really talented,” he continued. “[My brother] was the talented one. I was just the bruiser. I loved to fight. Just with dedication and sticking at it and working hard, I learned the sport and obviously developed my skills and I figured out a style that suited me best.”

His boxing has evolved. “I feel like a lot of people compare my style to Canelo, I am a good body puncher, I’m explosive and I’ve got good head movement as well, but I’m not too sure,” he said. “Obviously it’s a great complement to me and my style [but] I’m not trying to be no one but Caoimhin Agyarko. I have a unique style. I don’t feel like anyone’s seen the best of me unless you come down and watch me spar. I don’t think people have seen the real Caoimhin Agyarko just yet.”

He trains with Alan Smith and Eddie Lam at their gym in Bromley. “It’s an unbelievable gym, we’ve got so much talent coming through at the moment. I don’t want to be big headed or anything like that but we’ve definitely the most talented young gym in the country anyway. We’ve got Sam Noakes, Dennis McCann, Henry Turner, Archie Sharp, myself and a couple of others,” he said.

Agyarko is a powerful example. He was the victim of a brutal attack four years ago that nearly took his life and now speaks out about knife crime and mental health. “I got stabbed down the side of my face, my neck, it was an inch away from my main artery where I would have bled out in 12 seconds. It was quite serious,” he said. “It was very mentally challenging and I’ve always said I get better one percent at a time and I take a day at a time. I’ve come a long way from where I was back then. I genuinely hit rock bottom back then. I do mentally struggle now and again but it’s part of life.

“Being a fighter, being a man, you have a lot of pride and ego. I felt like I was violated. Coming to terms with I nearly lost my life and I’ve got a big scar down my face and stuff like that. So it was very mentally challenging for me… I was only 20 years old and trying to get back into boxing, not knowing if I could do, if the cut would open up.”

“I did have to go seek professional help,” he continues. “One of the best things I ever did was speak out and talk about my mental health issues.