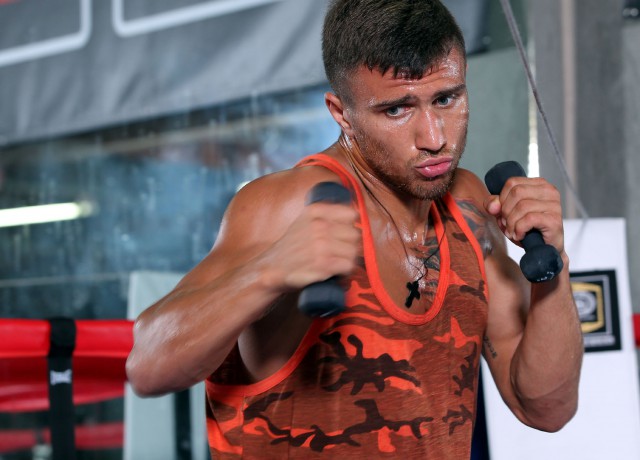 VASYL LOMACHENKO seems an otherworldly character. The first time I saw him he didn’t speak to me. It was in Baku at his last World championships. He wouldn’t do any interviews until the tournament was over so as not to break his concentration. He applied the same rule even at the Olympic Games where after each bout the boxers are obliged to walk through the ‘mixed zone’, an area where journalists wait to interview them. Lomachenko would sail through only stopping to speak once his tournament was over and he was victorious at London 2012.

As a professional world champion he’s mellowed somewhat, speaking to the press a couple of days before his WBO featherweight title defence in Macau. He could still be testy – when asked what was the most difficult thing about the transition to professional boxing, he levelly replied it was having “to answer the same questions to media people. When I was an amateur I didn’t do that”.

There is a mystique about Lomachenko. You can read a full feature on him in the bumper Christmas special issue of Boxing News this week.

But it also makes him fascinating. You want to know how he lives, what his notoriously demanding training schedule is like.

“There is no typical day, it’s hard work,” Lomachenko, eventually, revealed. “I wake up at 4.45am. From 5-6 I’m running. I’m coming back, I’m going to shower, I’m not eating, I drink a little bit of water, I’m going back to sleep.

“I go to bed, then I wake up, I eat. (My diet I start watching a good month before the fight.) Then at 12 o’clock I go to training. From 12 till 1.30 sometimes I swim, sometimes I do all kinds of different strength work.

“I come back again, I relax a little bit, if I am at home, I’m playing with my kids, I do something like family things until six o’clock. Then six o’clock I’m going back to the gym and training boxing, for two hours. I come back home, shower, eat relax, go to bed.”