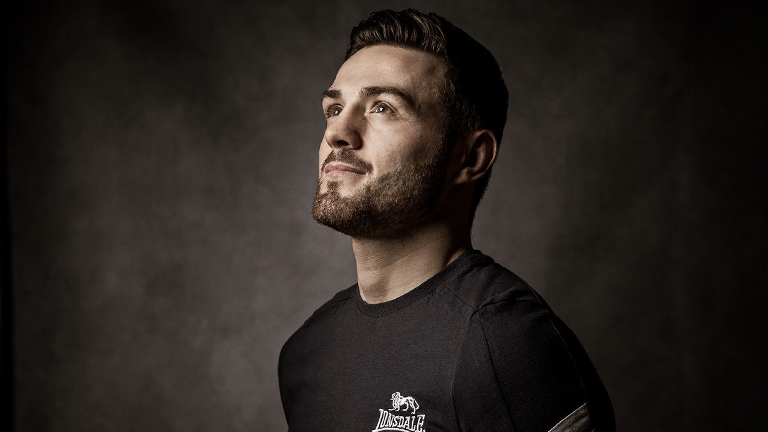 Leeds' Conor Loftus is on the comeback path following an operation on a detached retina, writes John Dennen

CONOR LOFTUS was not braced for the news. His boxing career, something the Leeds man had devoted himself to since childhood, was at risk. It could all have come to an end, depending on the outcome of a medical consultation.

He did not recall suffering the injury, he wasn’t aware of receiving say a big punch or indeed suffering anything particularly untoward. Yet Loftus saw shadows dancing in front of his eyes. “Over one weekend I was getting flashes of light in the corner of my eye, once every couple of hours. I thought nothing of it, brushed it off. Got into camp in Sheffield on the Monday, done some tech sparring and once I got out I had black dots,” he told Boxing News. “I was following them round the room like they were flies. I thought this is a bit strange. A couple of hours later they faded down.”

He thought he might as well get it checked out. Eventually a specialist delivered the verdict. He had a detached retina. Loftus needed an operation. “I made the mistake of Googling what happens and watching a YouTube video of the actual operation before I had it done. No, I wish I hadn’t watched it.

“There’s a thin layer above your eyes so they cut into that, peel that back. It’s like a rubber band. I can still feel it at the top of my eye. They’ve stitched around the eyeball and then they use cryotherapy, like cold burning to create some scar tissue over the retina, attach it back to where it should be,” he explained. “They gave me the option [to be awake during the procedure]. I said no. Put me to sleep, don’t want to see it, don’t want to hear it, no.”

He only understood how much was at stake afterwards. “I slowly got back into my training. I sat down with the doctor and he said listen there’s a couple of ways this could go when you go for your final post-op consultation. He could say [you’re] fine to box. He could say it’s fine to box, just not yet, you’ll have to wait a bit longer. Or he could say no. You’ve had this operation, your eye’s too weak, blah, blah, you’ll never box again.

“Before I had that conversation I’d not realised that was a possibility. I thought it was routine, have this operation and then I’ll be fine to box again. So that really messed with my head, to be honest. It was another four or five weeks after that conversation that I went to the final consultation and got it signed off and they said you’re fine to box. So for four or five weeks I had this hanging over my head, my career and my life,” Loftus said.

The Yorkshireman had been in the sport for 15 years. That could all have been over. “I was running through all the possibilities of what I was going to do if I had to stop boxing and where I’d find work. I’ve got responsibilities. There’s a mortgage and everything else. It was a stressful time,” he continued. “I’ve got a work ethic, I’ll always find work somewhere. I’d just have to find a job that covers the bills and then work out what to do in the long run, as long as the bills are paid.

“I’d put 15 years of my life into getting where I am today. I’ve still got so many more dreams and ambitions to go on from here. It was almost like in one second that could just be gone. One freak accident or whatever it was, or however it happened… Just a million thoughts running through my head. I didn’t know what I was going to do. It was scary.”

The operation was successful. Loftus has now been cleared to return to boxing, though to compete again internationally as an amateur he has to wait to be passed by the AIBA medical board as well. He’s returned to sparring, in at once with an elite level talent in Calum French for his first spar back.

“I think he was five or four weeks out from a tournament so he’s just starting to sharpen up all the tools. You don’t realise how much your body gets used to it. With your neck and everything, you just get used to absorbing punches. I’d not done that for 10 weeks and I felt like I’d been shunted by an 18 wheeler,” he chuckled.

Loftus’ career has still been buffeted by the slings and arrows of outrageous fortune, or at least the sudden changes in the amateur sport’s regulations. Originally a welterweight he moved himself down to 64kgs, only for AIBA to change the weight this year, shaving off an extra kilo.

“Internationally I was struggling with the height. I was a thickset 69kgs, I had the bulk for it but probably not the height for it internationally. A lot of these are pinching points. They did the body fat [tests] and whatever else. I think in the end I could get down to about 66, then I’d cut a kilo the day before and then I’d stop eating the day before and this and that, I could just about do 64kgs, absolutely shredded, nothing on me,” he said.

Making 63 kilos however was out of the question. He had to move back once again to welterweight. Currently Pat McCormack has made the GB spot his own. After winning a World silver medal, McCormack is likely to be selected for the first Olympic qualifier and could well win the place at Tokyo 2020.

Loftus has to be sanguine about the possibility of losing out himself.

“You start to realise exactly why you’re there and you’re probably building the foundations for what comes after. You start to look at it a little bit differently. It builds a solid base for whether you go to the Olympics or whether you turn over. Training three times a day, it gives you that conditioning and fitness. The whole mentality and the way that things are working gives you a great mindset. Training with all the lads, you’re training with the best in the country,” Conor reflected.

An old rival of his, Cyrus Pattinson, is in the same situation, chasing McCormack for the number one welterweight spot. “We get on, we’re clubmates. It’s nothing personal it’s just the way it is. It’s unfortunate but I can’t complain. He’s won the Commonwealths, won the Europeans, got a silver at the Worlds. So fair play to him. I support him anyway and I’m sure he supports me. It’s like the same race but you’re in a race with yourself, I think. Because that’s the only person that you can really compete with,” Pattinson told Boxing News.

“Amateur boxing and being in GB, you’re all in the melting pot because you’re training alongside the other competitors at your weight. We’re all going for the same stuff and we’re competing against each other in the runs and sparring. It’s that kind of environment, whereas obviously when you’re pro it’s all about you and your direction, your path. It’s a hard environment to be in. It takes a lot of getting used to, especially competing on a day to day basis with people. Because you are competing in a way but you’ve got to try and focus and stay in your lane and do things for you.

“We know it’s not the be-all-and-end-all. We’re all there for the same thing. We’re all going to make it regardless, I think. We’re not trying to take anything away from each other. Whatever happens happens. We’re all in it for the long run.

“It’s hard because that’s what everyone wants to do. On GB we’re all there for the same purpose, we want to go to the Olympics and we want to win medals for our country. You’ve got to remind yourself that that is a medium-term goal. But eventually the long goal is a much bigger kind of picture.

“So you’ve just got to remind yourself of that, just control what you can control. I think when I got on the squad in 2015 and I was competing with Josh Kelly, I used to focus too much on the stuff I couldn’t really control and that would bring us down a lot. It would dishearten us and discourage you a little bit. But now if you’re learning, you can only train as hard as you can train and you can only box the way you’re going to box and you can’t control all the judges or selections or injuries. It’s stuff that’s not even in your control. I think you’ve just got to understand that and focus on that,” he continued. “It’s just putting your trust in the process and then just staying focused.”

Pattinson has been in this situation before. He came close to the Olympics in the last cycle. He was selected for the European qualifier in 2016 and fell a bout short of reaching the standard to qualify for Rio. Josh Kelly was selected for the next qualification tournament and won the welterweight spot for GB in Brazil.

While he could be disappointed similarly in this cycle, Pattinson is plugging away, doing the same training camps as the others, seeing how far he can go.

“It’s hard when you have them disappointments. But life’s a fight isn’t it, really? We’re all going to have ups and downs. We all have things that discourage you. What are you going to do? Are you just going to find your corner and just lie in it? Or you’re going to keep fighting. I think that’s the same with life really, isn’t it?” he said.

“I’m loving representing my country. I want to win more medals for my country and this was always my ultimate ambition. And I want to be an Olympian. But I can only control what I can control at the end of the day. I’m training hard, I’m dedicating myself. I’m learning, I’m still learning and I just want to perform and just enjoy boxing for my country and we’ll just see what happens.”