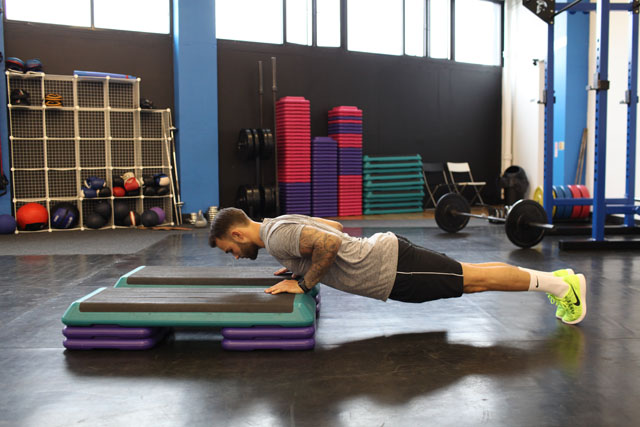 The strength work we documented last time was a lot slower, with a focus on tempo, but with power you need to explode. In boxing it’s all about the amount of power you can produce over a period of time; you don’t want to to lose it all in the first round. We aim to hit the major muscle groups, before pulling them all together to produce force. A lot of the movements here replicate movements in the ring. Strength worked the slow-twitch muscle fibres, but now we are recruiting and developing more fast-twitch fibres and building the stamina they have so they can be used, to devastating effect, throughout a long fight.
Ideally you would train power twice a week, so we use the Tuesday for upper body and the Thursday for the lower body – the upper-body exercises are below while the lower-body routine will be posted separately. Hurdle jumps increase elasticity in tendons and ligaments so should be done on both days – that’s why the double jumps are on the ‘upper-body’ day. This power phase will last three-four weeks. By the last week, we slowly enter things to take us onto the next stage, which is conditioning; we use similar exercises, but add an extra 10 seconds or a couple of reps.

1. Hurdle jumps 2 sets/3 minutes’ work/30 seconds’ rest
Set out eight hurdles. Jump over each one in turn, using both feet simultaneously, then jog back to the starting point and repeat the process until three minutes has elapsed. Land centrally after each jump and the less time you spend on the floor the better.

2. Explosive press-ups 8 sets/10 seconds’ work/40 seconds’ rest
Place two boxes shoulder-width apart and get into a press-up starting position. Keep your elbows tight into your sides and your wrists directly below your shoulders. Move down into a deep position, then power up and go as high as you can.

3. Dumbbell single-arm explosive presses 4 sets/8 reps per arm/60 seconds’ rest
Start by holding the dumbbell level with your chin, the other hand in a guard position and your feet square-on. Jump into your boxing stance and push the dumbbell up, the power transferring from your foot all the way through and up to your hand. Do all eight reps of one side before changing sides.

4. Medicine ball explosive lying floor presses 5 sets/8 reps/40-60 seconds’ rest
Lay on the floor with your knees bent. Start with your arms extended, lower the ball to your chest, then, with a big drive up, let go of the ball and your partner catches it. Receive it back and when you are ready, drive up again again from the prone position. This may mean a two or three-second ‘rest’ at the bottom; do not rush this exercise.

5. Medicine ball backfoot explosive presses 4 sets/6 reps per arm/40-60 seconds’ rest
Start, in front of a wall or column, with both hands on the ball, which should be tight to your chest – as should your arms – and just under your chin. Take a short, sharp step back, drive through your hips and explode forward with your arm and hand. Do all six reps of one side before changing sides.

6. Super-set
a)Medicine ball wall presses 3 sets/20 seconds’ work/40 seconds’ rest
A super-set predicates that you do all reps or time of both exercises before you rest, so in this case, 20 seconds of the first move, 20 of the second then a 40-second rest, three times. Start slightly further than full arm extension from a wall or pillar, with your feet shoulder-width apart. Keep your core tight and both your elbows and the ball tight to your body. Throw the ball forward with an explosive burst from your shoulders and chest, then catch it, pull it in and repeat.

b)Plank jumps 3 sets/20 seconds’ work/40 seconds’ rest
Place your hands inside shoulder-width, with your arms fully extended and your wrists under your shoulders but inside your chest, heels close together, back straight. Don’t let your hips drop. As you jump, you should move your arms and feet outwards, as shown.

7. Resistance band woodchops 3 sets/8 reps per side/40-60 seconds’ rest
Start with the band fully extended from the apparatus, and hold it in both hands, keeping a slight bend in the arms. Turn from your toes up to your hips, twisting away from the apparatus and generating the power through your heels. Do all six reps of one side before changing sides.