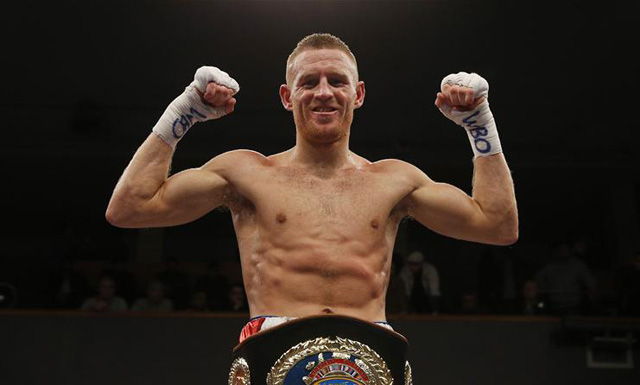 TERRY FLANAGAN has been given an offer to fight mandatory challenger Felix Verdejo on the undercard of Manny Pacquiao’s comeback fight on November 5.

The WBO recently ordered Flanagan, their lightweight world champion, to defend his crown against the promising Puerto Rican.

Flanagan’s promoter, Frank Warren, is currently in talks to secure a unification fight with WBC champion Dejan Zlaticanin, though ‘Turbo’ is happy with either scenario.

“Frank’s still trying to make the Zlaticanin fight, but I think the American broadcaster are making it hard work so it might end up being the mandatory, which is Verdejo,” Flanagan told Boxing News.

“They’ve offered me money to fight [Verdejo] on the Pacquiao undercard in Las Vegas so I’d be happy with that. Obviously we’re in negotiations at the minute so we’ll see what happens.

“You know what Frank’s like, he likes home advantage so we might try and get him over here. If the Zlaticanin fight happens, that’ll be overe here but the Verdejo fight is 50-50.”

Verdejo, Top Rank stablemate of Pacquiao, has steadily risen through the ranks with some eye-catching wins, though his progress has been hampered at times by injury and slightly lacklustre showings.

Flanagan won his title in dubious fashion when Jose Zepeda suffered a freak injury in their fight last year, though the Mancunian has since proved his class with wins over Diego Magdaleno and Derry Mathews.

The 27-year-old is eager to raise his profile and feels a fight with either Verdejo or Zlaticanin would do so.

“Obviously I wouldn’t mind going to America but if my team thinks it’s better to get home advantage then we’ll try for that,” he said.

“They’re both big fights, I don’t mind either way really. They’re both world class fighters. I’d rather fight the one which will get me the most money.

“I’ve watch Verdejo for about a year now, he’s a good fighter. They’re both good fighters, the two fights are as hard as each other, they’re both tough fights so I know I’ll have to be on my game.”