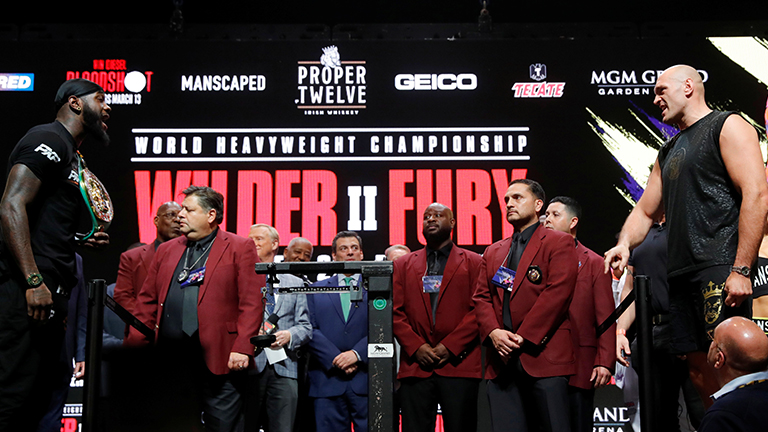 DEONTAY WILDER came in at 231lbs, his heaviest weight to date, ahead of his WBC heavyweight title defence against old rival Tyson Fury at the MGM Grand, Las Vegas. But it was nothing compared to Fury, who outweighs the American by a whopping 42lbs after tipping the scales at 273lbs.

Fury’s heaviest, for his comeback bout against Sefer Seferi in June 2018, was 276lbs yet he had trimmed down to 256 1/2lbs for his first shot at Wilder, the contentious draw in Los Angeles six months later. For that rousing opener, the “Bronze Bomber” weighed a slight 212 1/2lbs.

“I am 273lbs of pure British beef,” said 31-year-old Fury, who weighed in wearing a vest, shorts and trainers, as his adoring fans chanted his name. “It’s no secret I’m looking for the knockout and that’s what the fans are going to get. The fans have turned out to see the Gypsy King, are you all ready for a war?”

Wilder, 34, was unperturbed, both by the rousing reception his rival received and the weight difference.

“At the end of the day we’re heavyweights so it doesn’t really matter about weight,” he said. “I don’t care. This just indicates that I’m better than last time, I’m prepared. I don’t worry about his weight, I always face bigger guys. All I’ll tell you is, don’t blink.”

It seems that Fury, 31, is indeed going for the knockout, just like he’s been telling us from the start. A gain of sixteen pounds is certainly not conducive to boxing and moving, which he had great success with in the first fight, for 36 minutes.

Wilder, too, is gunning for the early finish and if we’re to draw anything from his weight, it’s that he’s ready for a physical battle.

Such was the demand to see the fighters stand on scales, the public weigh-in – only a fairly recent phenomenon – was completely full. Many fans, hoping to catch a glimpse of the two heavyweights, were left disappointed as they were turned away at the gates. Those who turned up earlier – one loyal Tyson Fury fan claimed to have been queuing since 5am – clogged the corridors that surround the MGM Grand Garden Arena.

Fury supporters significantly outnumbered those of Wilder and, clutching beer and singing the old classic – Walking in a Fury Wonderland – they  welcomed their hero to the stage.

Wilder, meanwhile, was booed to such an extent it was difficult to hear announcer Jimmy Lennon Jnr introducing him. The champion, bristling with confidence, outstretched his arms and played the villain.

There was no face off due to concerns that the fiery nature of the rivalry could explode at the wrong time. Bob Bennett, of the Nevada State Athletic Commission (NSAC), made the decision to keep them apart. It is the first time this has happened in Las Vegas and comes five months after Fury was badly cut by Otto Wallin.

At Wednesday’s final press conference, the two fighters shoved each other and there were references to ‘murder scenes’ mentioned by Wilder.

“Anybody that has been around fighters like I have you know when you get in a verbal altercation, and I’m not saying it’s right, but it’s certainly been prevalent, it can get pretty heated,” Bennett told Boxing News. “Then they’re putting their hands on each other, a lot of guys flip the switch and, the next thing you know, they’re going to hit you. We want to be proactive instead of reactive and say we don’t want anything to risk this fight taking place.

“What if he falls and twists his ankle or he cuts his lip or he cuts his eye? Then what happens? You don’t have a fight. Somebody is going to say, why isn’t the commission going to do something? The press conferences have been going great but now these guys are wound up days away from the biggest fight of their lives. We don’t need any more photos of them together, we have a million already, the priority has to be the fighters. Keep them apart.”

Instead of getting in each other’s faces they tried to get in each other’s heads. Fury howled at Wilder and finished by showing him his middle finger. Wilder responded by grabbing his crotch and shaking his fist.

On the big screens informed the crowd that Wilder is ‘the most terrifying puncher the sport has ever seen’ and, the nonsense that keeps on giving, Tyson Fury is the lineal heavyweight champion. What cannot be denied is the appeal of this fight.

Las Vegas, in a way that it hasn’t for a while, is truly buzzing with excitement.