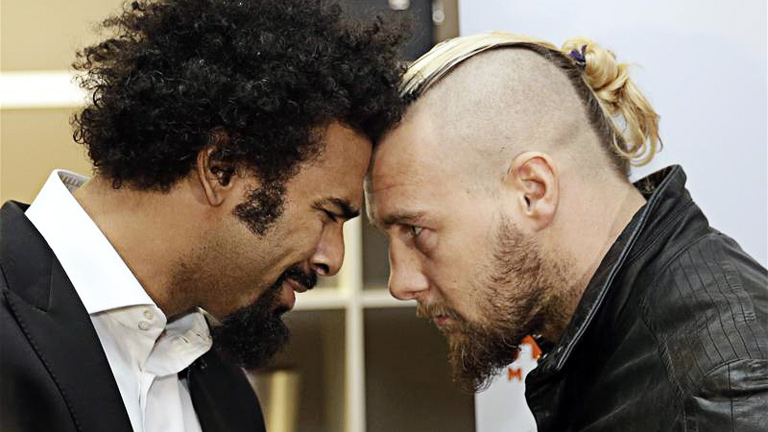 DAVID HAYE’S comeback is nigh. Three-and-a-half years out of the ring. Memories of flattening Dereck Chisora in 2012 are distant, and the humbling loss to Wladimir Klitschko seems like a lifetime ago. At the age of 35, after some “dark days” trying to regain his fitness, he enters the ring on Saturday night, at London’s O2, against little known Aussie brawler, Mark de Mori in a bout optimistically scheduled for 10 rounds.

Haye walked into Screen 5, at the O2’s Cineworld, with his chest heaving beneath a black t-shirt emblazoned with his surname, and addressed the media alongside new trainer, Shane McGuigan. Gone is his old mentor Adam Booth, gone is his old team. This, Haye asserts, is a new start. A fresh beginning, he promises, after persistent injuries – particularly to his shoulder – curtailed stage one of an eventful career.

“The desire is burning,” said the former two-weight world titlist. Atop his head was a scraggy but funky afro. Gone, too, are the long braided locks of his heyday. “The desire has been burning stronger than ever when I’ve been in hospital beds, being injured. You don’t know what you’ve got until you lose it. I didn’t think I’d be able to come back with all the injuries so I always said, that if I could ever come back, I would do it the right way. The desire couldn’t be burning any stronger.”

The comeback will be broadcast by comedy channel Dave, and despite being anchored by the brilliant and experienced broadcaster Paul Dempsey, this is yet another new development in a career that was once so familiar, and so welcoming. As is the long layoff. Since he started boxing as a youngster, Haye has never encountered such a lengthy break from the sport that made him a household name.

“I don’t know,” Haye answered when asked – probably not for the first time – if ring rust will be a factor. “I have never been in a position where I’ve been out this long. I don’t know if it will be a factor. It’s the unknown but I’m not too worried about it. If there is ring rust, it might just take me a bit longer to get my timing. With me, it could just click in, and the fight will be over.”

Haye insists he is back to complete unfinished business. To enhance his standing in boxing history and conquer the heavyweight division. It is a weight class now ruled by Tyson Fury, whom Haye was supposed to fight three years ago until injuries twice ruled him out of scheduled domestic showdowns. It was a catastrophic period of time for the heavyweight, one that invited critics to attack. Those critics were absent today, but the cheerleaders were not there in droves either. As Haye spoke with typical charm, only a fraction of the media who witnessed his previous battle cries were present. Nonetheless, this comeback has a curiosity value that will get the sport’s full attention for as long as it lasts.

“It’s been a long time since I’ve been in a position so close to a fight – that’s actually going to happen,” Haye explained. “It’s the start of something amazing. I believe the levels between world class and the unknown will tell. I don’t believe he’s fought anyone that will allow him to navigate through my speed and punch variety.

“I’m now in a position to throw punches like I used to. I’m enjoying training and there’s not much pain between sessions which is new to me. Every fighter who is shorter than me – [Jean Marc] Mormeck, John Ruiz, Chisora – has tried to get in close and push me. Each one who’s tried it has been knocked spark out. He [de Mori] can try it again if he wants.”

McGuigan, who has also recently taken over as George Groves’ trainer, is pleased with his new charge’s physical condition.

“I’m really excited about David’s comeback fight,” said McGuigan. “Everyone who has seen him on the pads has been blown away. He’s bigger and stronger than ever and people will be surprised when they see him.”

De Mori, meanwhile, is not anticipating any surprises. Apart from, of course, his own arm being hoisted into the air in victory. The Australian, sporting good humour and long platted hair, believes his rival’s layoff will be the key to a massive upset.

“So I assume most people have turned up to talk David Haye,” joked de Mori. “I’m the other guy, that’s my role here, to make him look good. I have respect for him but I’m here to win. I have explosive power, I’m here to knock him out, I’m here to fight. Everyone has written me off. Every time I have walked to the ring nobody has cheered for me to win. If we fought in 2012, it would be a Haye win, but now, in 2016, after so long out? The risk is there for him.”

The favourite, who insists cutting weight was the reason behind previous problems, did not appear remotely concerned about his opponent.

“This is like any other fight,” the Londoner insisted. “I haven’t watched any footage of him because he hasn’t fought anyone world class. Physically he’s stronger than me and thank god this isn’t a power lifting competition. But it’s not it’s a boxing match. I know what I’ve got to do. I anticipate this going into the second half of the fight, he’s tough, he’s strong.

“He knows I can punch. He’d be a fool if he thinks otherwise, and when people know I can punch, they tighten their defence. I’ll break him down… It’s going to be interesting while he’s conscious.”

‘David Haye takes on Mark de Mori at The O2 on January 16. For tickets visit axs.com or watch the fight exclusively live on Dave from 9pm.’