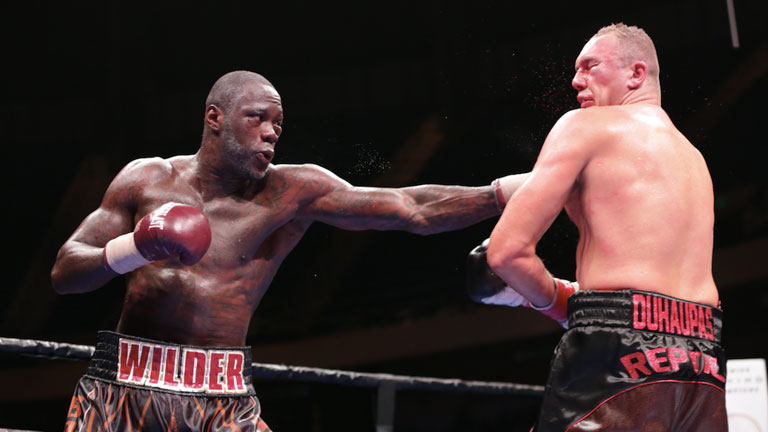 Wilder is promising to make a statement on Saturday, writes Olly Campbell

The Alabama native’s latest voluntary defence was sanctioned by the WBC but dangerous mandatory challenger, Alexander Povetkin is due to fight the winner of Saturday’s clash in the spring. The 26-year-old Szpilka’s sole blemish is a tenth round stoppage at the hands of American contender, Bryant Jennings, who last year gave a good account of himself in going the distance with Wladimir Klitschko, and the “Pin” is promising he is the man to upset the “Bronze Bomber” and bring the WBC title to Poland. However, Wilder is keen to start the year with a considerable bang of his own and insists laboured displays over the unheralded Eric Molina and little-known Frenchman, Johann Duhaupas last year will not be repeated. “I’m looking for a grand show. It’s going to be a great performance to kick off 2016,” he said recently. “This is going to be a huge year for me. I’m knocking Szpilka out and I’m sending a message to everyone who stands in my way.”

The list of fighters ‘standing in the way’ is considerable and of course includes Povetkin, who at 36 years old is enjoying something of a purple patch, turning in two of the best performances of his career last year with his first round blow-out of Mike Perez in May and November’s final round stoppage of 6′ 8″ giant, Mariusz Wach. Thanks to the deep pockets of Povetkin’s Russian backers, it’s possible that the Al Haymon advised Wilder could lose a purse bid and be forced to travel for the fight in much the same way then-champion, Wladimir Klitschko did back in October 2013 when he fought – and beat – Povetkin on Russian soil.

With the possibility of mouth-watering future fights against WBO &WBA champion, Tyson Fury, the returning David Haye, Cuban star Luis Ortiz and emerging unbeaten prospects Anthony Joshua and New Zealander Joseph Parker – not to mention the winner of the upcoming (vacant) IBF clash between Vyacheslav Glazkov and Charles Martin –  it appears that boxing’s marquee division is finally experiencing the breath of fresh air fans have clamoured for during a decade-plus of Klitschko dominance.

For his part, the colourful and personable Wilder is determined to be the sport’s new figurehead as the division moves into a new era and is promising fans can expect an entertaining roller-coaster ride for the duration of his championship tenure. “I’m the guy that has everything it takes to be heavyweight champion of the world,” he said. “It’s not just about being great inside the ring, it’s about doing great things outside of the ring and not everyone has that, but I do.”