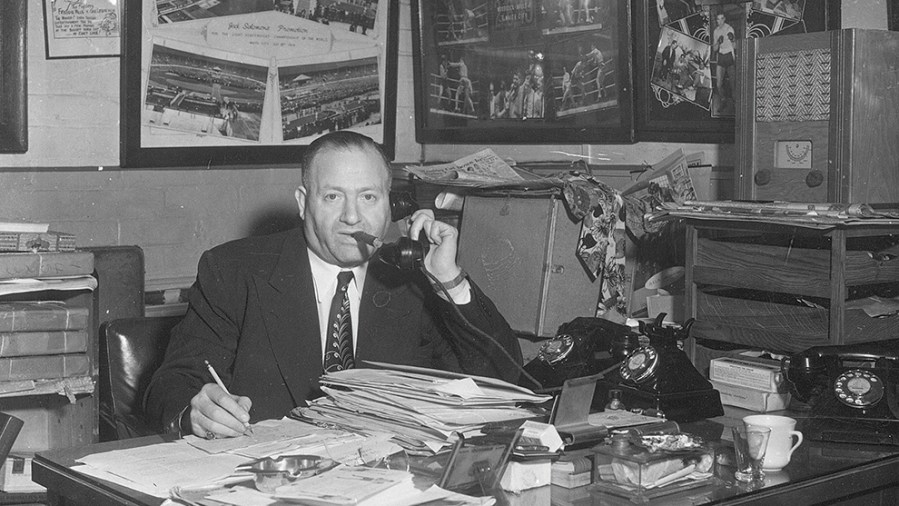 Jack Hirsch’s career as a boxing writer dates back to a time before many of today’s fans were even born. Here he details 20 things that have changed dramatically since he was a young pup on the way up

I HAVE a confession to make. When I sit in press row with my brethren I’m often hit with pangs of self-consciousness.

Laptops here, Laptops there, Laptops everywhere, except from yours truly who leaves his at home still covers shows for Boxing News with a pen and pad. Granted I’m usually not on the very short deadline that some of the other reporters are, but anyone observing me might think they were caught in a time warp.

Which got me thinking about the many things which were routine in our sport back in the day, but whose relevance is no longer as great as it once was, that is if it exists at all.

In no particular order of importance here are 20 of them:

NEWSPAPER COVERAGE: At one time the major dailies were the main source of information for the fan, but with the birth of the internet people no longer have to count on them for the latest information or fight results.

THE LIVE GATE: While still vital for the small club promoter, big promotions can turn a profit despite a small turnout. With the advent of Pay Per View and various ‘sponsorships’, the live gate is not always the main source of revenue as it once was. This was proven during the pandemic when shows went on with none of the public in attendance.

MANAGERS: Let’s be honest about it, the manager’s role has largely been diminished at championship level. It is the promoter who for the most part assumes the role of the de facto manager, making the decisions and guiding the boxer’s career in the way old time managers used to do.

POSTERS: One of the reasons these have become popular on the memorabilia market is because their use as marketing material has become virtually extinct. Back in the day, it was common to see posters hung up all over town for the biggest of shows. That’s not so much the case anymore.

RINGERS: Before the days of BoxRec, record-keeping was spotty. Even the revered Ring Record Book was said to contain many errors. As a result, some managers feared their man might be tricked into entering the ring with a fighter a lot more competent than they were led to believe. The fear of being tricked was frequently on their mind.

SCOOPS: This is a term used for breaking a story. Doing so before fellow reporters enhances the writer’s reputation or, should we say, at one time it did. While still satisfying to an extent, any breaking story is not likely to have the reporter’s fingerprints all over it for long. Before the day is out it will be posted all over the internet indirectly under another reporter’s byline.

BEING A CONTENDER: Because there were far less champions in past eras compared to this one, being a contender carried a large degree of prestige. But now it is no longer career-defining, but rather a stepping stone to a ‘world title’ opportunity and little more.

EUROPEAN CHAMPIONSHIPS: There was a time when holding a European title had added importance in that its holder would invariably be in line to box for world honours. However, with this era’s proliferation of belts, a European boxer can go straight into a ‘world championship’ match without ever having boxed for a legitimate title or proving they’re the best in their continent.

KILLER INSTINCT: Champions like Jack Dempsey forged their reputations on having a ‘killer instinct’, and the term was used for many decades after he retired (in 1927). However, in this day and age the term is frowned upon, understandably, because of the various ring fatalities that have occurred.

ABOLISHING BOXING: For decades there had been a movement to abolish boxing that seemed to gain momentum whenever a ring fatality occurred. Despite improved medical procedures the risks remain the same, but the call to do away with fisticuffs is rarely mentioned nowadays. The change in attitude can be traced to the studies that show other sports pose a serious safety risk as well, notably American Football. Other combat sports are gaining in popularity to a small extent as well. Because of all this the call to abolish boxing is, we hope, a thing of the past.

THE GREAT WHITE HOPE: During the era of Jack Johnson and for a good part of the 1900’s as well, the term Great White Hope was embedded in boxing culture. Now we rarely hear it mentioned for the simple reason that society has thankfully grown up.

THE SILENT RING WALK: Nowadays, even four-round fighters walk down the aisle with the music blaring from their favourite song. Ring walks have turned into a production, a spectacle. Back in the day the roar of the crowd was all that was needed.

SMOKE FILLED ARENAS: When I first started reporting on boxing, I would come home from a show with my clothes wreaking of cigarette smoke. A clean air environment around the ringside it was not. Clouds of smoke would hang over the ring as the matches were going on. With cigarette smoking now being banned around arenas this is no longer the case, but occasionally the smell of marijuana is in the air.

DRESS CODE: If you haven’t already, take notice of a photo of a match from years ago and what the spectators were wearing. The vast majority of men would attend in a suit and tie. That has given way to a more casual dress code or, in other cases – like the biggest of events, coming dressed somewhat garishly to impress.

SATURDAY NIGHT FEVER: The Fight of the Century between Muhammad Ali and Joe Frazier took place on a Monday night. In the past the vast majority of big shows traditionally took place on weeknights. Nowadays practically every big event is on a Saturday night.

WEIGHT DIVISION RANKINGS: When there were primarily eight weight divisions, champions spent their career in one or two divisions at most. We knew Marvin Hagler was a career middleweight, but what about the likes of Roy Jones and Manny Pacquiao? It is hard to say which division they primarily campaigned in. Outside of the heavyweight division, top 10 all-time great lists are not as fun to debate as they once were.

THE ROLE OF THE TRAINER: The trainer used to be completely in charge of getting the fighter into top physical condition. That is no longer the case as most top boxers now employ a whole team to get them in shape.

TICKET STUBS: Those were the days when you would purchase a ticket, walk up to the usher at the entrance of admittance, show him your ducat which he would check before tearing it in half and letting you go through. Now we are dealing with technology which is fine for the younger generation, but not so much for the older one.

FIGHTER INTRODUCTIONS: These days fighters attending a show are introduced to the crowd through the Jumbotron, the huge overhead screen. At most they are shown for a few seconds drawing a reaction from the fans. Years ago the crowd was far more entertained seeing the champions standing in the ring and being introduced before the main event.

FIGHT NIGHT PROGRAMS: These were once hot items, but no longer in demand as they once were. At one point it was essential for fans to buy a program so they would know who was boxing and find out more about them. But not many fans seem to have time to read anymore and get what they need from YouTube and social media.