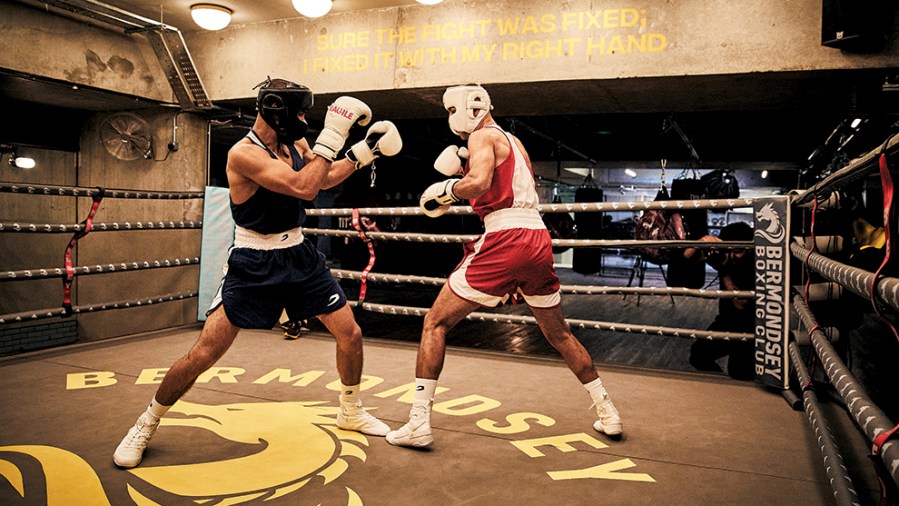 Manya Klempner has opened three state-of-the art boxing gyms in as many years with a fourth on the way in 2023, writes Matt Christie

WALK into almost any boxing gym and the first thing that strikes you is the smell.

But there’s not even a hint of stale sweat inside the lavish reception of Camden Boxing Club. Instead, the aroma of fresh coffee and freshly baked paninis guide you downstairs, not past fading fight posters but past framed modern artwork of Amy Winehouse, the legendary singer who lived a mile away and was a regular in the pubs that are even closer. In short, this neon-lit club is not your average boxing laboratory.

The state-of-the-art gym, which like sister clubs Rathbone and the recently-opened Bermondsey, is affiliated to England Boxing. The three gyms come under The Boxing House umbrella and were the brainchild of the fiercely determined Manya Klempner who spotted a gap in the market while falling in love with boxing training herself after giving birth to her first child. An ex-banker who has worked in New York, Moscow and London, Klempner explained: “All I knew about boxing before I started training was that Mike Tyson had bit someone’s ear off,” she chuckled. “But I realised that boxing is a lifestyle, I was drawn in very quickly, to the characters, to the passion, to the discipline. The genuineness and honesty of boxing, in its purest form, was incredibly attractive.

“But the majority of gyms in the centre of London are boxercise studios. That’s not what I wanted. The real boxing gyms, were on the outskirts of town, on council estates, they were intimidating and difficult to access for someone like me, a 40-year-old ‘Marylebone mum’. That was when I had the idea. To have a gym that was the real deal, that retained the core values of the sport, and one that was accessible in the centre of town, one that was immediately welcoming.”

She opened Rathbone Boxing Club in 2019 after several years of convincing investors that there was a demand for clubs like this. Before that, she had also convinced Adam Booth – one of the best coaches in the world – that her vision was 20/20.

Now the Executive Director, Booth told BN: “Boxing and London are historically entwined. The popularity of boxing in the commercial fitness world has grown rapidly, and unfortunately, the training methods been diluted to fit the ‘industry shoe’.

“At Camden, Rathbone and Bermondsey Boxing Clubs, we truly respect the sport in what we do and who we are. We have a genuine love for the sport, vast experience, and coaching acumen, not to mention facilities that do the sport proud – and provide the patrons the customer service they deserve.”

The majority of gyms and clubs up and down the country are run on a shoe string, barely surviving on the subs they charge, but this one – along with those in Rathbone and Bermondsey – has a very different philosophy.

The classes vary from group classes to fight schools, from personal training to advanced coaching for amateurs and professional boxers. It isn’t cheap – there’s not many bargains to be found in Camden, let’s face it – but you get the attention and service you pay for. The premise is simple: affluent clients pay for courses and classes with qualified coaches, which in turn subsidises the amateur clubs within the gyms. For investors it’s a sound business proposition and Klempner continues to work hard to attract fundraising.

Camden BC opened its doors in 2021, two years after Rathbone. In the interim, a pandemic grabbed the world by the throat and many businesses struggled for breath. Klempner, however, recognised an opportunity to run free. The price of business rentals dropped, even in desirable areas. The site for the Bermondsey branch was secured and opened in August. A fourth gym is in the works, located near Gloucester Road station and will open next year.

“We essentially turned lemons into lemonade,” Klempner explained about how she grew a business in the early throes of the economic . “It was scary [during the pandemic], we didn’t know what was happening and, no, of course it was not a great time to start a business. But because of the lockdown, we got some great deals [from landlords]. By then, we had already had support from our clients and our investors.

“We’re playing the long game. Boxing is the next lifestyle sport, in my opinion. We’re creating that lifestyle, we’re creating our own community within communities. Each site has that feeling of togetherness, of community. Everyone who steps through the door is special and will get the same attention, irrespective of whether it’s the first time they’ve boxed or the ten-thousandth.”

As well as those classes, which take place seven days a week for boxers at all levels, the clubs – which open at 6am and close at 10.30pm – have staged amateur events, both in the gyms and at places like York Hall, with Rachel Bower driving interest as the Head of Amateur Boxing.

Each gym’s head coach has experience of working with professional and amateur boxers. At Camden, Troy Williams is the boss. Rhys Verlander has taken the reins at Rathbone while Steven Broughton – who once spent two weeks at Boxing News as an intern but is probably better known for his excellent work with heavyweight Joe Joyce – leads the way at Bermondsey and also operates as Group Head Coach for The Boxing House.
Though each gym is laced with post-modern touches, old school values remain at their heart. “We aim for egos to be left at the door and for everyone to come in and give 100 per cent,” said coach Newman. “Boxing changes lives, but it all starts with having the right mindset/mentality. The Coaching Team works effortlessly to develop that ethos within the gym.”

Klempener added: “There is no reason why anyone can’t get involved. We have so many newcomers that come in here, of all ages, that do it for the very first time and then never leave. It’s called the boxing bug for a reason. It’s a very special sport that’s changed my life.”

*** Anyone wishing to join The Boxing House’s journey should contact Manya via email – manya@theboxinghouse.co.uk ***