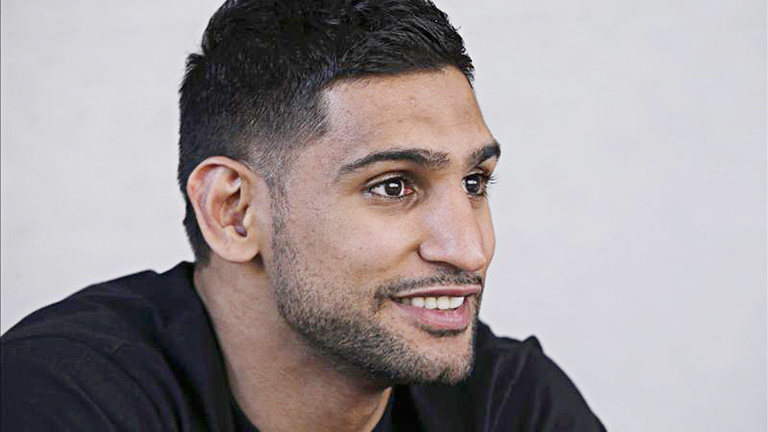 The weirdest and most wonderful responses to our 60-second interview questions, from the likes of Amir Khan and Jean Pascal

Best attribute as a boxer?
I’m a lucky man because I was born with iron in my fists.
Move over Robert Downey Jnr. KIKO MARTINEZ is in town.

Something not many people know about you?
No one knows that I’ve killed someone in the past… Only kidding!
ROBERT BERRIDGE had us worried for a second.

Worst rumour about yourself?
When I was an amateur, some people used to say that my cousin, Oscar [De La Hoya], was paying the judges off so I could win my fights!
DIEGO DE LA HOYA has friends in high places, but he’s not a cheater.

When and why you started boxing?
When I was 13, I was ashamed of my big nose. I asked my father if I could get surgery to make it smaller. He told me that having a big nose is a reason to start boxing, so I did!
That’s some sound logic from ERMANO FEGATILLI’s old man.

Have you ever been starstruck?
When I met Jennifer Lopez. If you can hook me up with her, I’m open!
We’ll see what we can do for you, JEAN PASCAL.

Last time you cried?
Back in 1999, when I got my ass whooped by my mom for staying out too late.
You don’t want to mess with JUNIOR ANTHONY WRIGHT’s mama.

Worst rumour about yourself?
Back in the day, everyone used to say I only had one ball! I don’t know how the rumour came about, but everyone at school believed it!
School life was evidently tough for NICK BLACKWELL.

Something not many people know about you?
I’ve had a Muhammad Ali poster on my wall since I was a kid, featuring his quote: ‘I’m so fast that last night I turned off the light switch in my hotel room and was in bed before the room was dark.’ Every day I try the same thing, and I feel I’m getting closer!
We knew AMIR KHAN was quick, but not that quick.

When and why you started boxing?
I started boxing in my friend’s backyard when I was 15 years old. The neighbourhood tough guys all gathered round and tried to beat me up because I was the smallest and youngest in the group.
SERGIO MORA was once at the bottom of the food chain.

Best advice received?
‘Boxing is the hardest sport in the world. You only get out what you put in. Now put down that biscuit fatty!’ – My dad.
JOHN WAYNE HIBBERT has a weakness for digestives.