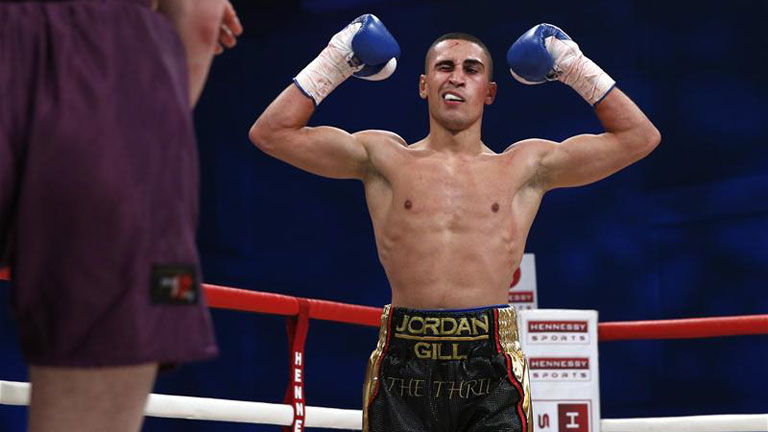 Jordan Gill made it two dominating wins out of two whilst being on the Boxing Science program with an impressive 2nd round TKO win in Carshalton, Surrey. ‘The Thrill’ has been working with the team at Sheffield Hallam University for the past 6 months, recording massive improvements in strength, speed and fitness.

In his most recent testing, Jordan recorded 16% improvements in jump height, 11% improvement in P4P hand velocity and reduced lactate accumulation.

We take a look at the Science Behind the Thrill: Phase 2!

Jordan’s stoppage victory didn’t happen by chance, we knew he was hitting harder thanks to our punch-velocity profiling using the landmine punch throw. The test requires 5 punches on each hand over 5 different loads, starting at 20 kg with incremental 5 kg loads up to 40 kg.

In just 8 weeks, Jordan improved his velocity across the majority of the loads. The biggest improvements were seen at 30 kg for his right hand (14%) and 25 kg for his left (12%).

From these data, we can predict what velocity would be achieved at 0 kg load – essentially what the hand speed would be in a punch (in this type of movement). Pound for pound he improved 11% on the right, and 9% on the left.

Impact: Jordan is now hitting harder at a lighter weight.

Jordan’s first training phase consisted of learning the foundational movements for compound lifts, which he picked up really well and got strong quickly.

This allowed Jordan to train at higher loads. He adapted well to this, and started to shift some iron.

This training was aimed to improve maximal force production, however we also needed this to transfer to his boxing performance.

We implemented plyometrics, ballistic and speed exercises, as well as starting his Olympic lifting journey by introducing clean pulls. This improved Jordan’s pound for pound jump height by 16%.

Impact: Jordan is now more explosive at a lighter weight.

Before joining the Boxing Science program, Jordan was already physically fit. His first program was designed to improve his capability to perform at high intensities. We helped to improve his maximal running speed by 1.5 km/h on the 30-15 intermittent treadmill test. A higher standard than some of the world class athletes we’ve tested.

Such a standard, however, makes his conditioning programming quite complex and variable to ensure training adaptations continue.

We used maximal sprints for 30 seconds with a long recovery to promote increases in oxidative enzymes for aerobic fitness.

After this phase this, we used 10-20 seconds repeated sprints aimed at developing Jordan’s anaerobic glycolytic capacity and function.

Comparing Jordan’s lactate profile to October 2014, Jordan has less accumulation of lactate in his blood for the same speed as well as a decrease in heart rate (10-12 bpm) at each stage.

Lactate begins to accumulate at a faster running speed, meaning that Jordan can exercise at higher intensities before he starts to fatigue.

If we translate this to boxing, he’s able to throw more shots at a higher force.

Because of the pressure Jordan is putting him under, his opponent will fatigue and make mistakes. All the while Jordan is cruising and controlling the pace because he finds it easier.

Jordan is a great advocate of our program and has made fantastic improvements in a short space of time.

This is not all down to the Boxing Science program, as he’s helped massively by the world class team around him.

He boxes out of the famous Ingle Gym, with top coach Dominic Ingle, that boasts a stable of World, European and British champions, offering Jordan great coaching and world-class sparring.

Jordan has a tailored diet plan from nutritionist David Stache who has worked with a number of boxers at the very top level. David’s nutritional support enables Jordan to fuel for performance and recovery during training. This makes sure he’s getting the most out of his training program.

As well as hard work, commitment and dedication to his career, Jordan makes a lot sacrifices to make sure he has a world class team around him.