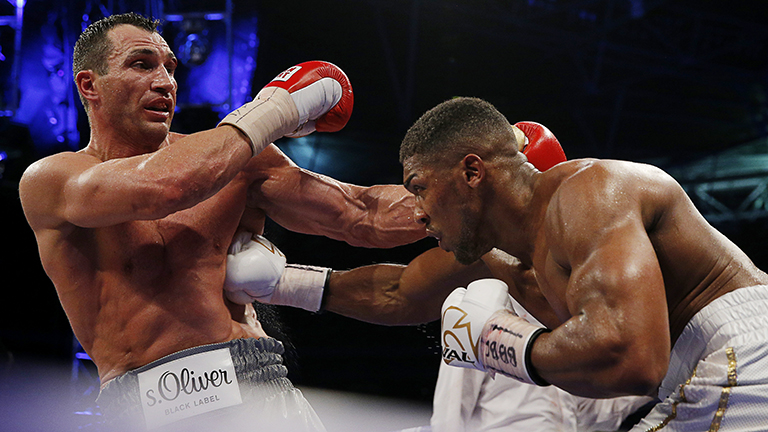 IT has been one month since Anthony Joshua and Wladimir Klitschko produced a fight which not only lived up to its billing but far exceeded it. Now that we have had a chance to sit back and reflect on the heavyweight classic there are a dozen compelling points that should not be overlooked:

POINT ONE – Klitschko is the greatest 40 + heavyweight of all time: To perform as he did at the age of 41 was nothing short of remarkable. George Foreman regaining the title at 45 by knocking out Michael Moorer is a more impressive accomplishment on paper, but that was essentially a one punch knockout after getting thoroughly dominated for the whole fight. No other fighter in heavyweight history could have come as close to defeating Joshua at such an advanced age as Klitschko did on that evening.

POINT TWO – Klitschko would have won had he been 10 years younger: No way to prove this for sure, but if Klitschko could come so desperately close to defeating Joshua at age 41, surely his chances would have been much better had he been a decade younger.

POINT FOUR – No other division compares to the heavyweights: That is correct. As great as smaller guys are the bottom line is that the heavyweights are the best fighters in the world due to their size. The reason we have a pound for pound list is because a good heavyweight can almost always beat the men in the divisions below.

POINT FIVE – Joshua is the best heavyweight in the world: Fans of Deontay Wilder might take exception, but the WBC ruler has struggled against less than stellar opposition before prevailing. In all likelihood Joshua would have dismissed those same opponents without much a fuss.

POINT SIX – Klitschko is the second best heavyweight in the world: Wilder has never really beaten a world class heavyweight whereas Klitschko has plenty of times. An argument can be made on behalf of Fury, but not until he regains the form that saw him defeat Klitschko.

POINT SEVEN – Stadiums, not arenas, are the wave of the future for mega fights:  90,000 people watching Joshua and Klitschko go at it was as big a story as the contest itself. A 20,000 seat indoor venue even if it is Madison Square Garden, can’t compete with that. Indoor arenas will still be able to secure very good fights, but going forward not the handful of colossal ones.

POINT EIGHT – Klitschko will be champion again: The feeling here is that Klitschko has no plans to retire and is still extremely motivated. Although he can have an immediate rematch with Joshua, look for Klitschko to face one of the lesser belt holders such as Joseph Parker first or taking Shannon Briggs’ place and matching with Fres Oquendo. These are very winnable fights and would make a Joshua rematch even bigger with those additional titles on the line.

POINT NINE – Fury is in the driver’s seat: If Joshua and Klitschko could pick any one opponent who they want to box next it would be Fury. Add that to the fact that he never lost his title in the ring and it makes the big Englishman the most sought after man in the division. Fury can call his own shots, something no other heavyweight has the novelty of doing.

POINT TEN – Keep an eye on big brother Vitali: It might seem like a stretch that Vitali Klitschko at age 45 and out of the ring for close to five years would make a comeback, but perhaps he saw something in Joshua he thinks he could expose. A dream doubleheader of Dr. Ironfist vs Joshua and Wlad against Fury on the same bill would be off the charts.

POINT ELEVEN – Joshua is the legitimate world heavyweight champion: Titles should only be won and lost in the ring, but the bizarre case of Fury is an exception to the rule. Sympathetic as we are to the issues Fury is dealing with his inactivity was keeping the title hostage. Someone has to fill the void. None of the other belt holders has scored a victory over an opponent remotely in Klitschko’s league. That makes Joshua the man amongst the big men.

POINT TWELVE – Joshua will go on to establish himself as one of the greatest heavyweight champions in history:  Joshua seems destined for a run of utter dominance over the years that would ultimately put him on a par with Muhammad Ali and Joe Louis when people discuss who was the best to ever wear the heavyweight crown.