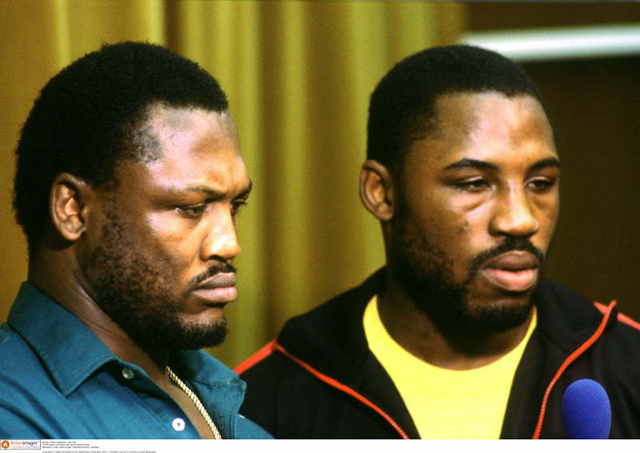 Marvis Frazier speaks to James Slater about his biography, his legendary father and the upcoming unveiling of his statue

MARVIS FRAZIER has some story to tell. The son of one of the greatest heavyweights in history, Joe Frazier, Marvis also carved out a useful career of his own.

In “Meeting Marvis Frazier,” his new book, the 54-year-old tells all.

Q: Your biography is now out, entitled “Meeting Marvis Frazier.” Did you always want to write your life story?

Marvis Frazier: “Yeah, man. It’s all about Christ [laughs]. That’s the main thing with me. Everything is in the book; my faith, my family, my whole life.”

Q: The book is co-written with Jamie Potter. How did you two meet?

M.F: “My father and I, we were in a diner and he [Potter] was sat in the corner at a table. He recognised my dad and we talked and we became good friends. I understand the book is on the best seller list over in the U.K (laughs).”

Q: What is the latest with your father’s legendary boxing gym in Philadelphia? I read a while back how Bernard Hopkins was thinking of buying it.

M.F: “It’s a memorial place and my understanding  is, it will be there forever. I really don’t know about Bernard, but he is a big guy, a good guy, and it would be great if he did that [bought the gym.]”

Q: And the statue of your father, is the unveiling still scheduled for this September? That will be some special day in Philadelphia.

M.F: “Yes, it’s my understanding it will be in September. Oh, yeah, that day will be it (laughs).”

Q: Your father had so many legendary fights and The Thrilla in Manila is 40 years old this October. You were there of course.

M.F: “Oh, I made sure I was at that fight. That was such a learning experience for me. Every round was just action-packed.”

Q: We’ve all seen the brilliant documentaries about that incredible fight, and listened to those people who feel Muhammad Ali would not have been able to continue had Eddie Futch allowed your father out for that 15th-round. All these years later, do you think Ali would have been able to carry on fighting or not?

M.F: “I think he [Ali] would have collapsed if he’d made it out. At the time, I didn’t think he’d be able to come out [for the 15th-round]. But you know, it’s all in the past. It’s history now. But for me, the fight that was the best, that was the first fight [between Ali and Frazier] That was The Fight of The Century, two undefeated champions who showed the world what they could do. That’s one of the greatest fights I’ve ever seen; still today. That fight lived up to the hype. That fight was even better than The Thrilla in Manila in my opinion.”

Q: Did you and your father often sit and talk about those fights against Ali?

M.F: “Not really (laughs). Pop was just pop, a regular father. He never really talked about those fights much at all, no. He always told me, ‘Son, there’s no right way to do wrong and no wrong way to do right.’ And he told me I would do right or else I’d get a taste of his left hand (laughs).”

Q: Talking about your boxing career, you actually fought a man who also fought your dad in Joe Bugner. You both beat Buger on points of course. What are your memories of the Bugner fight?

M.F: “[Laughs] I knew after I beat him I was ready. My pop had beaten him, I knew I’d better make sure I beat him too. We’re Fraziers, you know [laughs].”

Q: Do people, fans, ask you about your boxing career, the fights you had with Larry Holmes and Mike Tyson?

Q: And Tyson was approaching his blinding peak when you fought him in 1986, he was taking everyone out…

M.F: “You don’t need to tell me that [laughs]. I threw a jab and I don’t remember anything else.”

Q: Are you still a fight fan today? Do you watch today’s heavyweights?

M.F: “Not as much as I used to. Every now and then I will watch one. I saw the Manny Pacquiao fight [against Floyd Mayweather]. It was a fight, but it wasn’t anything like an Ali or a Frazier fight. But they got the money [laughs]. Which is a good thing, that they are prospering.”

Q: Getting back to your book, is Larry Holmes coming to meet up with you this month, to help promote the book?

M.F: “Yes, Larry’s a good man, a great guy. I guess he will be helping me promote the book, yes.”

Q: And it’s available on Amazon and there is an audio version also available?

CLICK HERE FOR THE LATEST ISSUE OF BOXING NEWS