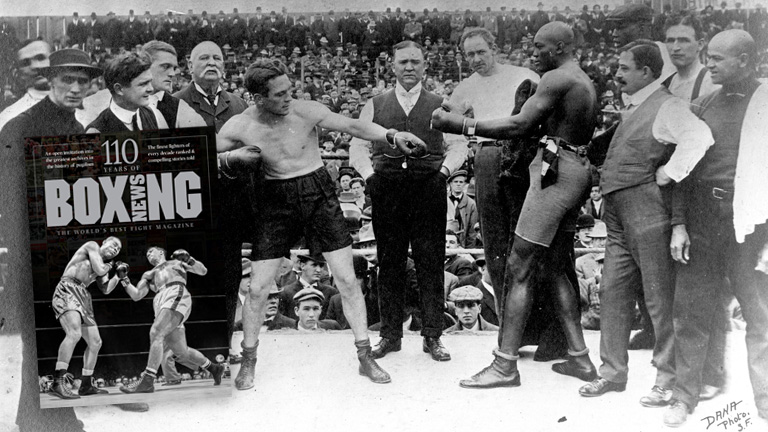 IF you’d walked into the Boxing News office at any point in the last month you’d have been met with scenes of chaos. Magazines sprawled all over desks, old photos piling up and the ordinarily locked cupboard-doors to our archives flung open like a poltergeist was among us. This is because we were working on our impending special, 110 Years of Boxing News, which is in the shops from November 13 and is available to pre-order now.

In short, it’s a celebration of Boxing News, this weekly boxing paper that was born in 1909 and continues to deliver – on its many international platforms – 110 years later. It’s a celebration of not only the boxers and personalities who make the sport such an engrossing and courageous spectacle, but also the writers, designers and editors who have worked tirelessly behind the scenes to keep the good ship BN sailing through some turbulent waters.

I will never forget my first day at BN when I was shown our vast archives for the first time. My love for Boxing News can be traced back to the mid-eighties when my parents realised buying a copy would keep their young son quiet for a few hours. But in 2010, when I became part of the BN team and devoured the history that oozed from every page of those nostalgia-drenched archives, my love became a bond that is stronger than ever today.

Like all long-term relationships, there have been some trying times. There have been countless press days where I have left the office, bleary eyed, and questioned why I do this. Many long journeys and projects that take me away from my family – away from my wonderful wife and daughter, the apple of my eye – where I wonder why I devote so many hours to dear old Boxing News. The answer I always arrive at is likely the same answer that every editor before me arrived at as they questioned the slog of it all, too.

The same answer that John Murray – who was editor three times – came to as he battled against almost impossible constraints to ensure the paper survived the First World War. He no doubt asked himself again if it was really all worth it during the onset of the Second World War, as he fought ill health yet refused to turn his back on Boxing – as it was then known.

Gilbert Odd would soon take over and one can only imagine how he felt as he arrived at the office to find it had been blitzed by German air attacks in 1942 and years of history had been reduced to a pile of rubble. Odd would reign as editor twice and he added splashes of colour, some sharp design and increased the readability dramatically. Yet occasionally his words, like Murray’s before him, pointed to frustration with the sport.

Fast forward through Tim Riley and Graham Houston – two fine editors who worked tirelessly and made their mark, the latter in particular, as he turned BN into an international publication with reports from all over the world – to Harry Mullan, widely regarded as the finest editor Boxing News has ever had. Mullan fought hard for the paper and the fighters on its pages. Yet his annoyance with the boxing world was often at odds with his love for it.

Claude Abrams followed Mullan and adopted a more measured approach yet he would not suffer fools either, regularly fighting against promoters – and even publishers – who attempted to tarnish BN’s name in any way. When Abrams left after 13 years in charge, the paper had grown into a glossy magazine that was a must-read all over the world. Tris Dixon followed and he was faced with a fight quite different to those that the World Wars presented to Murray and Odd. It was the age of new media, of Facebook and Twitter, of YouTube and camera phones, that continues to attack print journalism without remorse today. BN, as always, was quick to adapt.

Over the years, amid constant arguments with influencers and those who want to be, the role of BN editor – to represent a wonderful yet inherently muddy sport – is a tremendous challenge. The answer, then, is the one that Murray himself provided in the first ever editorial, way back in 1909.

“Boxing is not offered to the public with an apology,” Murray wrote. “We claim it is wanted, and wanted badly.

“It will stand for good, clean sport. Its success or failure is in the hands of those who believe in sport of that character. Our energies will be devoted to giving the best paper that time, thought and money can devise.

“It’s up to you, the reader, to help a good thing along.”

And wow, have you readers helped a good thing along. Today, as our content reaches more eyes than at any point in our history, Boxing News continues to be a success because of you. With that in mind, it seemed like a no-brainer to produce a special that traced the progress of the sport alongside that of the brand throughout our 110-year history.

What quickly became apparent, and perversely comforting, was the sport has always battled against the issues that it does today. For example, in 1911 we ran a plea from Sam Langford, Jack Johnson’s leading challenger, for the world heavyweight champion to face him. He never did give Langford his shot.

In the 1920s there was a cartoon titled ‘Too Many Cooks’ that poked fun – while illustrating annoyance – at the amount of sanctioning and governing bodies jostling for power. In the next decade we explained why current champion Joe Louis would stand no chance against John L. Sullivan, the bareknuckle king from the 1880s, because, simply, ‘they don’t make them like they used to’.

Another constant has been the wonderful fighters who are the beating heart of the sport. 110 Years of Boxing News, above all, is a tribute to them.

Within the 164 pages, alongside some glorious archived content, you will find new features and interviews. We attempt to rank the best fighters from each decade against each other (which, by the way, was no easy task). Illustrating every page is some of the most beautiful imagery a fight fan could wish to see. There are interviews with BN editors of old, tributes to those no longer with us, and – our bread and butter – plenty of seriously good writing.

I won’t lie, the process was an exhausting one and unfortunately we couldn’t tell every story we wanted to. But at the end of it all, as we sent the pages to the printers, we were almost sorry to see them go such was our enjoyment in creating them.

Now it’s up to you, the reader, to help a good thing along.

110 Years of Boxing News is available in the shops from November 13 and is now available to order HERE.