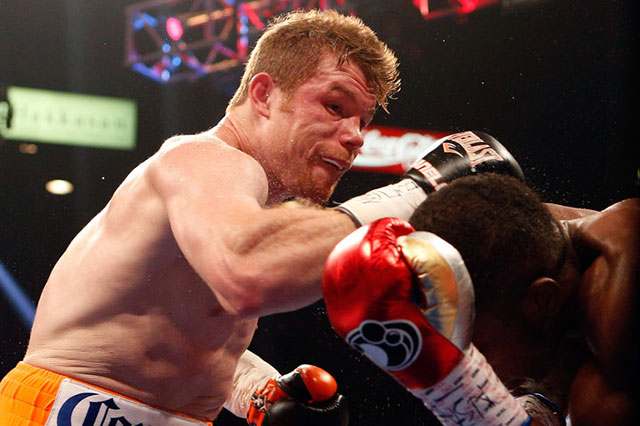 Alvarez is currently doing the red tops proud. Matt Christie looks at some that came before

2. DANNY LOPEZ
“Little Red” was every bit as fiery as his hair, and had it not been for the great Salvador Sanchez, Lopez’s reign as WBC featherweight boss would have been longer.

3. RICKY HATTON
There was some debate in the office about the colour of the two-weight world champion’s hair. It’s definitely ginger. Google Image him if you’re not convinced.

4. JIM WATT
Sky’s longstanding co-commentator was a superb and spiteful fighter in his pomp, whose reign as WBC lightweight champion was unfortunate to stumble across Alexis Arguello.

5. STEVE COLLINS
The Irishman was an underrated warrior, responsible for the downfall of Chris Eubank and Nigel Benn.

6. MICKY WARD
The strawberry blonde ‘Fighter’ carved his name in history, and Hollywood, with that fruity left hook to the body that became his trademark.

7. COLIN JONES
Like the majority here, ‘gutsy’ and ‘cut prone’ come to mind when thinking of Jones – a talented Welshman unlucky not to rule the world.

9. RICHARD DUNN
The Brit’s thick auburn sideburns could do little to withstand the impact of Muhammad Ali’s mitts in 1976, as Dunn became “The Greatest’s” last stoppage victim.

10. EAMONN MAGEE
Every inch the Belfast bruiser with shaved head and stubbly chin. Even harder than he looked, Magee gave Ricky Hatton a torrid time in 2002.