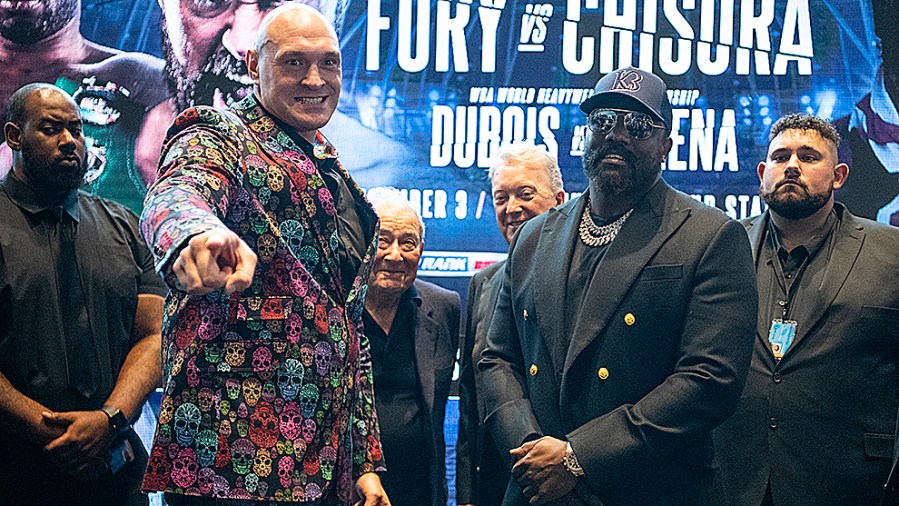 It's not a fight anybody was calling for, but it's happening anyway: Tyson Fury vs Derek Chisora III. Here's perhaps why...

This is the big one for promoter Frank Warren, who, at the press conference to announce the fight, ran down a list of heavyweights on BoxRec.com to prove the only heavyweight in the world Tyson Fury could fight next was Derek Chisora.

An inability to travel to America has no doubt impacted the options available to Fury, so it makes sense for him to stick around in the UK and fight a fellow Brit. He can also say he is doing it for the good of the British economy as opposed to out of necessity.

3 Fury and Chisora are kindred spirits

It’s a dysfunctional relationship, not far off abusive, yet there remains a feeling that Fury and Chisora get along rather well and will, after this third fight, probably become lifelong friends.

4 It’s now or never for Chisora

There is always a sense with Chisora that he is one fight away from retirement and it is for this reason the big names at heavyweight want to get involved with him, fearful that his pulling power will otherwise go to waste.

If we’re being honest, the only fight that really makes sense for Fury to take next is one against Oleksandr Usyk, the Ukrainian many consider his equal. Usyk, however, has already declared he will not fight again in 2022, so that, unfortunately, can’t happen.

An alternative to Usyk was a fight between Tyson Fury and Anthony Joshua only that fell apart due to there being too many egos involved in the negotiations. Now Fury says he won’t fight Joshua at all.

7 The first two fights were forgettable

The good thing about the first two Fury-Chisora fights is that they were forgettable. Better still, the bulk of the audience this third fight is targeting will not have been following boxing in 2014, the year Fury and Chisora last met.

8 Fury vs. Anyone sells

Sadly, we’re at the stage now where the idea of watching Tyson Fury box in a football stadium is all that really matters for many who pay to see such a thing. The opponent is irrelevant when it comes to these fans posting “Wish You Were Here” photos and videos on social media.

9 Chisora is a PPV star

Okay, to call him a pay-per-view “star” might be stretching it, but clearly in the last three or four years Chisora has emerged as someone reliable – both in terms of his personality and fighting style – to use as a PPV B-side.

Apparently trilogies matter and, with two of them soon under his belt, Fury will proudly say he has done what no other world heavyweight champion has done before.