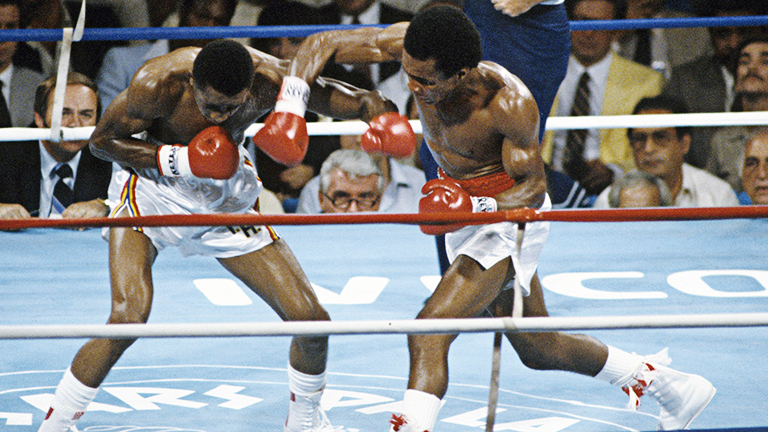 Errol Spence vs. Shawn Porter is the latest in a long line of intriguing fights to take place in boxing's welterweight division

In this epic September 1981 meeting of champions at Caesars Palace, Leonard, the WBA titleholder, was given a torrid time by Hearns’ jab and size before getting himself back into the fight and stopping the undefeated WBC champion in a dramatic 14th round.

When Duran and Leonard met for the WBC crown in June 1980 at Montreal’s Olympic Stadium it was ‘Hands of Stone’ who came out on top, roughing up the Olympic champion to tarnish his unbeaten record and solidify his own reputation as one of boxing’s most feared inside-fighters.

The September 1993 clash between Chavez and Whitaker took place before 60,000 fans in San Antonio, Texas and was shrouded in controversy. Though Chavez’s unbeaten record remained intact thanks to a draw, many felt Whitaker outboxed the Mexican.

Having waited five years for his shot at welterweight gold, Robinson finally got his chance when the title was vacated by Marty Servo and Tommy Bell agreed to fight him again in December 1946. Robinson then outpointed Bell to take the belt.

5. Barney Ross vs. Jimmy McLarnin I

Ross and McLarnin established quite the rivalry as pros but their first fight, back in May 1934, stands out because it took place in front of 60,000 fans at the Madison Square Garden Bowl. It was a fight won by Ross via split decision, a result overturned by McLarnin in the rematch four months later.

Young welterweight phenoms Leonard and Benitez met at Caesars Palace in November 30 with the WBC title at stake. Leonard, 23, overcame Benitez, 21, in the 15th round of a fascinating tactical battle from which both emerged with their reputations enhanced.

Former Team USA training partners Mosley and De La Hoya met as pro welterweights in June 2000 and Mosley, new to the division, came away with the WBC title. The former lightweight champion was too quick for De La Hoya that night at Staples Center and added his name to the list of great welters known as ‘Sugar’.

Thirty thousand fans turned up at Philadelphia’s Municipal Stadium in July 1949 to see Robinson defend his welterweight title against Gavilan in a rematch of their 1948 encounter. This time Robinson survived a cut and some close early rounds to eventually outpoint the ‘Cuban Hawk’ after 15 rounds.

Known as the ‘No Mas’ fight, Leonard and Duran locked horns again in November 1980, five months after their first meeting, and this time Leonard moved more, boxed more and frustrated Duran. It was too much for the Panamanian who said enough was enough in the eighth round.

Although Cotto and Pacquiao went back and forth in the early stages of a November 2009 fight at the MGM Grand, Las Vegas, Pacquiao’s speed and explosiveness enabled him to stop a flagging Cotto with just two minutes left on the clock.