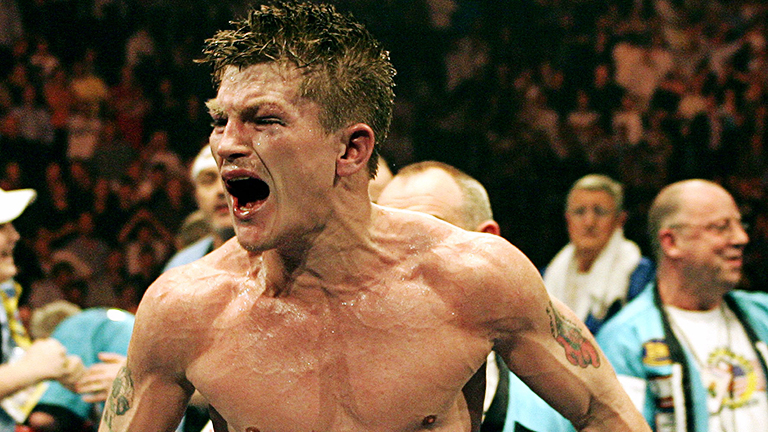 To celebrate Anthony Crolla’s final fight this weekend, here are 10 of the best champions to have emerged from Manchester

1. Ricky Hatton
Hatton spent years defending a fringe title in sold-out Manchester arenas and then had the night of his life against IBF super-lightweight champion Kostya Tszyu in 2005. He later added the WBA title to his collection – as well as one at welterweight – and would, at his best, lose only to Floyd Mayweather and Manny Pacquiao.

2. Tyson Fury
Larger-than-life Fury came of age in 2015 when he travelled to Germany to shock long-reigning world heavyweight champion Wladimir Klitschko. He left with his belts but would never defend them. More recently Fury held Deontay Wilder, the WBC champion, to a draw.

3. Scott Quigg
Quigg became British super-bantamweight champion in 2011 and then the following year got his hands on the WBA title. He managed six defences of the belt before Carl Frampton, the IBF champion, snatched it in a dull fight in Manchester.

4. Anthony Crolla
Crolla had to overcome adversity outside the ring as well as inside the ring yet still managed to stop Darleys Perez to win the WBA lightweight title in 2015. He followed this with a victory over Ismael Barroso, an unbeaten Venezuelan, only for Jorge Linares to take it away from him in 2016.

5. Terry Flanagan
After winning the British lightweight title in 2014, Flanagan worked on climbing the WBO rankings and eventually secured the title with a win against Jose Zepeda in 2015. This was a belt he defended five times before American Maurice Hooker dethroned him in 2018.

6. Michael Brodie
Considered one of country’s best boxers to never win a world title, Brodie, a British and European super-bantamweight champion, came close in an epic 2003 draw against Injin Chi with the WBC title on the line. He was then sadly stopped in the rematch six months later.

7. Pat Barrett
Barrett won British and European honours at super-lightweight before moving up to face Manning Galloway for the WBO welterweight belt in 1992. Unfortunately, even his Manchester fans couldn’t help Barrett take the title from the American that night.

8. John Murray
An exciting British and European lightweight champion, Murray beat a host of domestic rivals before a WBA title shot against Brandon Rios in 2011 ended in a punishing 11th round stoppage loss at Madison Square Garden, New York.

9. Ensley Bingham
Bingham was a British super-welterweight champion whose big world title opportunity arrived against Ronald ‘Winky’ Wright in 1996. That night, with the WBO crown on the line, Bingham fell short on the cards.

10. Michael Gomez
Born in the back of a car, Gomez’s pro career was an unpredictable one to say the least. The British super-featherweight champion lost fights he wasn’t supposed to lose but also famously snapped the unbeaten record of Alex Arthur in 2003 and almost did the same to Amir Khan five years later.