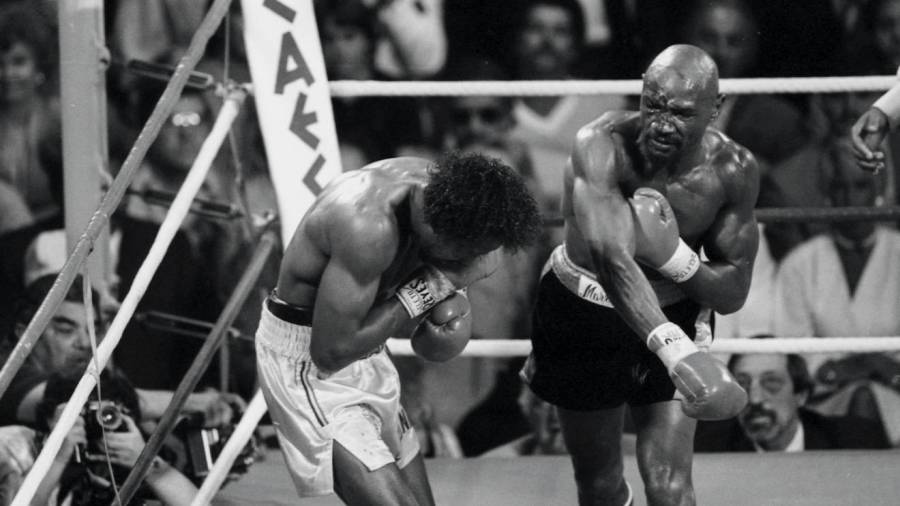 1. THOMAS HEARNS (RSF 3 – APR 1985)
The definitive Hagler win. In one of the greatest fights in history, the middleweight legend traded bombs with fellow Hall of Famer Hearns in eight of the most action-packed minutes that you are ever likely to witness in a boxing ring.

2. ROBERTO DURAN (UD 15 – NOV 1983)
In this riveting clash of all-time greats, Hagler found himself behind on the scorecards heading into the last two rounds, but like a true champion, he produced a strong finish to come out on top.

3. ALAN MINTER (RSF 3 – SEP 1980)
Following a long and arduous journey, this was the night that Hagler finally got his hands on the middleweight title. Unfortunately, his hard-earned coronation was overshadowed by the disgraceful scenes that occurred post-fight, as the pro-Minter crowd proceeded to riot.

4. JOHN MUGABI (KO 11 – MAR 1986)
The final victory of Hagler’s career was a particularly punishing one. Up against a fearsome challenger who had KO’d all of his previous 25 opponents, the Marvelous one tamed “The Beast” in savage style.

5. MUSTAFA HAMSHO (RSF 11 – OCT 1981)
A formidable Hagler became the first-ever middleweight titlist to receive a million-dollar purse when he battered the dangerous Hamsho to defeat. Three years later, he stopped the Syrian brawler for a second time.

6. VITO ANTUOFERMO (RTD 4 – JUN 1981)
Former champ Antuofermo was left a bruised and bloodied mess after his gritty rematch with Hagler. Two years beforehand, the duo had drawn in what was Marvin’s initial attempt at securing the middleweight crown.

7. TONY SIBSON (RSF 6 – FEB 1983)
This was arguably the southpaw star at his fighting peak. As Boxing News Editor Harry Mullan wrote in his ringside report: “Hagler’s performance was quite flawless… It was cold, ruthless perfection.”

8. BENNIE BRISCOE (UD 10 – AUG 1978)
In front of nearly 15,000 fans at Philadelphia’s famous Spectrum – a record for a non-title fight – Hagler triumphed over the intimidating Briscoe in a bout that was labelled as “The Battle of the Balds.”

9. WILLIE MONROE (RSF 12 – FEB 1977)
After being outpointed by an inspired Monroe a year previously, Hagler demonstrated his improvement by winning this return clash. Six months on in the rubber match, the New Jersey native again won via stoppage.

10. KEVIN FINNEGAN (RTD 8 – MAR 1978)
A bloodbath of a battle saw Finnegan earn Hagler’s respect for his guts and toughness. In the sequel just two months later, the game Brit was forced out on cuts once more.