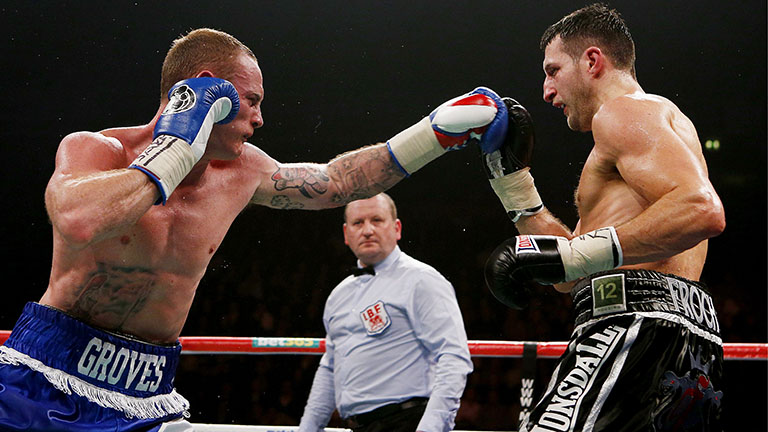 Although most boxers unfortunately continue fighting longer than they should, these champions timed their exit just right

1. Carl Froch
The night Froch left boxing in 2014, he didn’t just land arguably the best punch he had ever thrown on the chin of George Groves, he also launched the shot in front of 80,000 fans at Wembley Stadium. You’ve heard all about it. It was as perfect as he will have you believe.

2. Carlos Monzon
The fearsome Monzon ended a 13-year unbeaten streak and his pro career with a unanimous decision win over Rodrigo Valdes in 1977. He retained his WBA and WBC middleweight titles and announced his retirement the following month.

3. Lennox Lewis
Though Lewis’ 2003 fight against Vitali Klitschko ended in controversial fashion, when the Ukrainian’s cuts left him unable to continue, there can be no arguing Lewis retired on top. He won his final fight against the heir apparent and resisted the temptation to have one more.

4. Andre Ward
Ward, a world champion at super-middleweight and light-heavyweight, shocked the boxing world when announcing his retirement in 2017 at the age of 33. Still in his prime, Ward had just stopped Sergey Kovalev, his main light-heavyweight rival, in a rematch.

5. Rocky Marciano
World heavyweight champion Marciano made it to 49-0 when he knocked out an ageing Archie Moore in the ninth round of a title defence in 1955. With that, ‘The Brockton Blockbuster’s work was done.

6. Joe Calzaghe
For a man often criticised for staying in Britain and defending his WBO super-middleweight title, it was fitting that Calzaghe ended his incredible 46-fight unbeaten career with two fights in America. He beat a badly faded Roy Jones Jnr in Madison Square Garden to end it all in 2008.

7. Ricardo Lopez
Mexican legend Lopez retired with a 51-0-1 pro record, having never lost a fight, and announced his departure from the sport two months after defeating Zolani Petelo in a 2001 defence of his IBF light-flyweight title.

8. Gene Tunney
After twice beating Jack Dempsey to become world heavyweight champion, Tunney knocked out Tom Heeney in 11 rounds to bring an end to his 68-fight career. That 1928 title defence capped a six-year unbeaten spell for ‘The Fighting Marine’.

9. Vitali Klitschko
Klitschko’s final fight against Manuel Charr in 2012 wasn’t exactly the most iconic or satisfying of finishes but it did put the seal on a run of 13 straight wins and confirm his second retirement (his first was in 2004). He left the sport having only lost, on a cut, to Lennox Lewis.

10. Wladimir Klitschko
Klitschko is the anomaly here, given he lost his final fight, but the manner of the defeat and the credit he received for his performance makes the Ukrainian worthy of a place. His 2017 classic against Anthony Joshua was a passing of the torch moment for the heavyweight division and Wlad left it all in the ring.